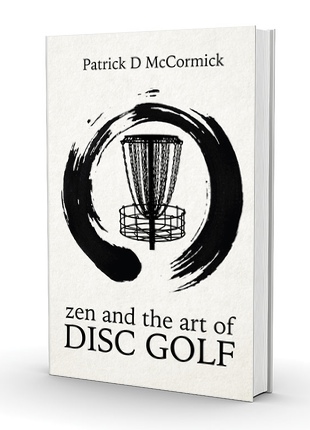 For those who live outside of the warmer climates, it is time to start thinking about winter golf, indoor practice, and playing in the snow. Tournament season has slowed way down and many even decide to wait until it warms up in the early spring to pull back out their discs. Between now and then though, there is still plenty you can do to improve your game. One area that you could easily work on is the mental aspect of disc golf.

To help others build up a strong mental game, Patrick McCormick has released Zen and the Art of Disc Golf. We picked up a copy to check out (we’ll refer to it as just Zen) and gave it a read over the weekend. It isn’t a very long read, and isn’t overwhelming, while providing some great points to think about and reinforces other habits we’ve had.

I don’t want to get into all the details, but there are a few areas I want to highlight. We’ve covered the mental aspect of disc golf here before in talking about how you should act like a sponge during a round and the “practice like you play, play like you practice” idea. Zen does a good job on highlighting these areas with often a similar approach or a new take on them. It never hurts for a second opinion on the mental side of disc golf and McCormick offers up a strong one. If one approach didn’t work for you, the ideas offered in Zen might be it.

McCormick details how one bad shot shouldn’t ruin an entire round. You hear people talk about how it’s just one of 18 holes and there are 17 other chances to make up for it. Zen talks one level further about how it’s one shot in the 50-70 range depending on the course. Once a shot is made, move on from it and focus solely on the next one. It can be hard at first, but it will certainly help your end result. We’ve tried to practice this ourselves and found when we don’t dwell on the bad shot from a few holes ago, we start to focus on the run of good shots we have had.

Another point that resonated with us was the idea that during a practice round, bad shots still count. We’re certainly guilty of throwing a bad drive and following it up with a second shot. If that mulligan results in a better lie, we play from there instead. We’re hurting ourselves by not playing the more difficult lie. You need the practice playing from undesirable locations on the course. Odds are, you’ll find yourself in that situation in a tournament and won’t know what to do. Zen talks about this a lot and it is a strong section of the book.

There are details about how being prepared for bad situations like this can help you move on from bad shots and continue to take the tournament one shot at a time. Sure, the birdie chance might be gone, but strong focus can certainly help save par.

Another area of Zen that we really agree with is the idea of playing with others who are better than you. Zen expands on this idea and breaks it into three sections: the “Mentor Group,” “Peer Group,” and “Protege Group.”

The “Mentor Group” are the disc golfers who have more experience who can help you with technique and help you determine what you’re doing right or wrong. We strongly agree with this idea and it has certainly helped us become better disc golfers over the last year. Playing with others who are better than you will help you see things on the course you wouldn’t always think of.

The “Peer Group” is exactly what it sounds like. These are disc golfers who are at the same level as you. It is your benchmark. It’s always good to have something to judge yourself against and to see if you are getting better.

Finally, the “Protege Group” is the group that looks to you as a mentor. These are the golfers who are just beginning and actually learning from you. One of the best ways to become a better disc golfer is to teach it. You’re actually teaching yourself at the same time and reinforcing the good habits you have.

Zen isn’t going to teach you all the ins and outs of ‘being zen” or make you a “zen master” after you read it. Heck, McCormick admits that right up front. He does a nice job of setting the stage to not turn you off before you even start reading. It isn’t about some higher power. It’s more about what is between your own two ears.

One way that McCormick helps bring some of these ideas down to simple terms is to connect it to your everyday life. Many of us would love to play disc golf for a living, but we can’t. We have jobs that we go to all day and play disc golf in our spare time. Nearly every section has a connection to the real world. You can easily draw parallels to previous experiences in the work place and how some situations at work are very similar to what you find on the disc golf course, but you’ve never really realized it.

Zen and the Art of Disc Golf is a perfect read anytime of the year to help your disc golf game, but is especially strong right now as we move away from the tournament season and into the season of winter golf. It took just just two chunks of time over the weekend to digest everything and read Zen from cover to cover. We highlighted just a few of the sections in Zen. We still wanted to leave something to you to pick up on your own. It’s safe to say that you’ll take something away from it and in the end, you’ll take steps to being a better disc golfer with the knowledge you’ll gain.

Zen and the Art of Disc Golf is available $9.99 on Amazon in paperback, $4.99 for your Kindle, or you can pick up a signed copy for $25. Bulk orders are also available through ZenDiscGolf.com.