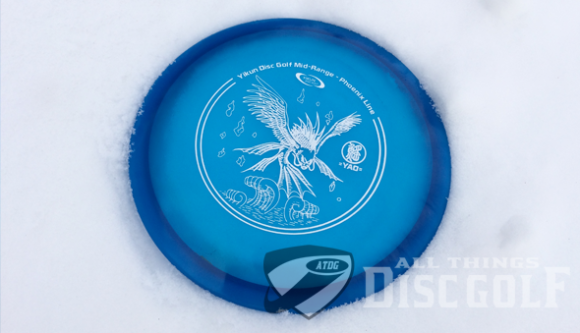 New disc golf companies were popping up on a regular basis throughout 2013. Late in the year, one company was from a new market for disc golf. Yikun Disc Golf is based out of China and has already released quite the line of disc golf discs. While they already have six discs currently in production, only two are PDGA approved. The Yao midrange and View control driver both passed PDGA inspection and can be used in tournament play. Yikun Disc Golf asked one of their retailers in the United States, Infinite Discs, to send us some discs for reviews. After battling Mother Nature for a day to test, we finally had the chance to take the Yao out on the course.

Yikun Disc Golf says this about the Yao:

Yao is a very reliable midrange, straight flying path with solid fade. It is easy to control with good grip, and the cool stamp on Yao is created by fine artist according to Chinese ancient Classics. The Yao is ideal for both beginners and pros.

We need to first talk about the Phoenix plastic the Yao comes in. We found the Phoenix line to be very similar to Discraft’s Z plastic. It was a stiff version of the translucent candy colored plastic. The grip was very similar to Z and the durability was equally as good.

The Yao is a wide diameter midrange with a similar feel other midranges of a similar size (Roc, Buzzz, Stingray, etc…).  As with any good midrange, we always felt like we had a very comfortable grip with the Yao. We felt like we were always in control of the disc on any throw.

When you first let the Yao rip from your hand and fly down the fairway, you’ll notice a predictable amount of speed with very little glide. We were expecting to see a little more glide from the Yao before we started testing. Don’t take this to be a negative though. On shorter drives and approach shots we were able to really lean into the Yao and have confidence it wasn’t going to fly too far.

The Yao was also very stable at high speeds. It could easily stand up to a headwind and hold a very straight line. If you put it on a tight anhyzer line out of your hand, it will flex back pretty quick to a flat flight before finishing to the left. Because of the lack of glide, if you are wanting to throw it on a little s-curve, you will need to give it some added height. 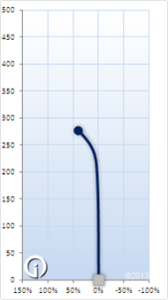 While it is tough to always compare discs, the Yikun Disc Golf Yao could be compared to a wide diameter Innova Gator. If you like the feel of wide diameter midranges, but like the flight of the Gator, the Yao might be the trick. It doesn’t do anything that fancy, but what it does do, it does well.

Overall, we’d rate the Yikun Disc Golf Yao at 4, 2, 0, 3.5. You’ll get a pretty predictable amount of speed from the Yao without a lot of glide. The Yao is very stable at high speeds and does have a decent amount of fade at the end of the flight. Looking at the flight chart from inbounds Disc Golf, you’ll see the stable flight we were talking about.

The Yao is one of those discs that you keep in your bag that you can trust. It won’t do anything crazy and it won’t glide out of control. It will go where you want it to as long as you trust it. It can take some power and can fight a headwind. Yikun Disc Golf’s first entry into disc golf is no slouch.