You are at:Home»Reviews»Drivers»Westside World Review 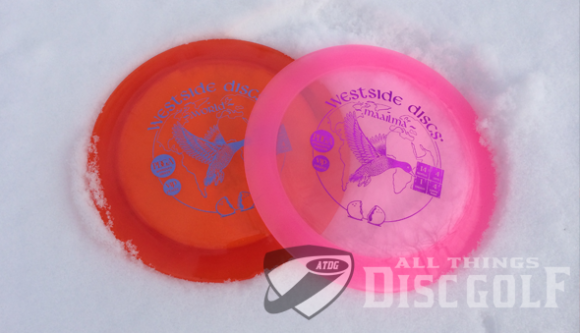 Westside Discs has some of the fastest discs on the market today. That statement was even true before the release of the Westside World. The Westside World is a very high speed distance driver that can really take some power. A few Worlds were sent our way to review and we’ve had the chance to throw them in weights between 172-175g in a few different colors. Westside says the World is a disc for big arms:

Compared to Westside Giant, the Westside World gives you more speed and distance thanks to small improvements especially in the upper molds design.

The three Worlds we threw were a max-weight pink, 174g white, and 172g pink with all three in VIP plastic. We mention the colors and weights for a reason and we’ll explain in a moment. While some discs rely on glide for added distance, and some disc rely on both glide and speed, the World really relies on its speed to carry down the fairway. Westside does clock the World in as a Speed 14 driver and based on the amount of arm speed and strength you need to get it 100% up to speed, that rating is accurate. When you do get it up to speed though, the World will really fly though. This is certainly a disc that wants to do one thing: go far.

Beyond the speed, the other thing that stands out is the World’s stability at high speeds. Westside gives it a positive 1 for turn. After testing the World with various arm strengths, the World’s stability will vary depending on who is throwing it. Stronger arms will see a little turn out of the World. It takes some strength, but you will be able to get the World to break into a slight turn. It isn’t much, but it is noticeable. If you don’t have an arm with a lot of strength and power, odds are the World will perform closer to that 1 rating for turn. Regardless, one thing is clear. You can really lean into the World and it will hold up to it. Even with a little bit of turn, the World isn’t afraid of power.

The World’s fade is really what you would expect it to be. With the speed the World has going down the fairway, the fade tends to be a little forward as well. Regardless of the direction though, it is strong. As it starts to slow down the World will begin to track to the left, but still push forward, before really dumping hard at the very end. It isn’t the strongest fade we’ve seen across the board, but it does rank up there.

Normally, we think that color doesn’t play a big difference in how a disc flies. That can’t be said for every disc though and we should say that our results with the World might be an anomaly. Our pink, max-weight World was the most stable at high speeds. We had the most difficult time trying to get the pink one to turn over on us. The white World we tested had a little less stability at high speeds, but had a stronger fade at the end. The red one? Well, that was right in between the two in terms of both high and low speed stability. Does the color make a difference? Even though its kind of a copout answer, but in this case, we say… maybe. 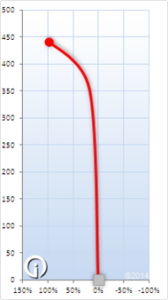 The one thing we are sure of though is the flight difference in terms of weight. The lighter Worlds flew a little more understable than their max-weight counterparts. If you are interested in the World and don’t have the strongest arm, the lighter weights are worth a look.

Westside rates the World at 14, 4, 1, 4. After our tests, we’d rate the World at 14, 4.25, -0.75 to 1, 3-4. When you first see Westside’s ratings you are expecting a very overstable flight. In reality, it does have some turn, but needs some strength to get it to turn. Just as the turn will vary among arm strengths, the fade will as well. If you are experiencing more stability at high speeds, get ready for a stronger fade. Less stability at the start of the flight will lead to a weaker fade.

The flight chart from inbounds Disc Golf reflects the ratings from Westside. Expect them to be updated soon with a more accurate flight for the World. Initial data is based on what the manufacturer provides and in this case, it does need some tweaking.