You are at:Home»Reviews»Midranges»Westside Tursas Review 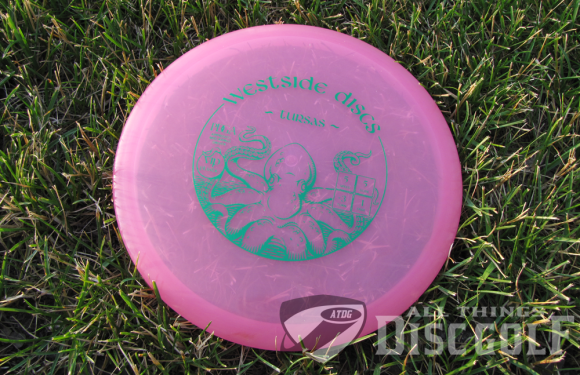 Westside Discs completed their trio of new discs for 2013 with the Westside Tursas. This midrange looks to bring you an understable option with great control to your disc golf game. Westside describes the Tursas as an “Understable mid-range with outstanding control for unhyzers. Very easy to throw.”

Westside sent us a VIP Tursas to review and we would agree with the “very easy to throw” remark. The Tursas was rated at 5, 5, -3, 1 by Westside. In our tests, we didn’t see a flight quite that understable, but it certainly was controllable. In the hand, the Tursas has a very controllable feel to it. The Tursas is beadless with a slightly wide rim for a midrange. The rim is a little wider than a Roc or a Buzzz and does bring a little bit more speed. If you have trouble getting a good grip on the smaller rimmed midrange discs, the Tursas should feel better in your hand. There certainly is something there to hold onto and rip.

With our first throws we did notice that the Tursas had nice speed and above average glide. The Tursas would reach max speed pretty quickly and relied on the glide to get some added distance. With the added glide, don’t expect the Tursas to drop very quickly. It will remain in the air until the last possible moment. In our tests we had multiple people like this and dislike this. There were times when people were wanting it to fade or drop to the ground quicker. Others were happy to see a few extra feet added to their throws.

Another thing we noticed in our tests, and proved to be the feature that received the most comments, was the stability of the Tursas. The -3 turn rating for the Tursas was never seen in our tests. At the very most, we’d give the Tursas a -2 rating for turn. While we were expecting a very understable flight, the Tursas actually showed a very straight flight. If we gave it a little hyzer, the Tursas would flip up flat and hold a very straight line. If we released flat, the Tursas would turn every so slightly, yet never really turned over. We found ourselves being able to control the Tursas quite a bit. If we needed it to ride a little hyzer line, it would. If we needed it to fly on a short, straight line, it would. Once we adjusted to the stability, the Tursas really showed it’s strength. 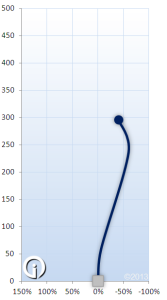 At the end of the flight, the Tursas did have a very small fade, yet nothing strong enough to really fight a headwind. While it wasn’t a strong fade, the Tursas certainly did have a little more than expected. We would throw the Tursas on a big anhyzer path and it would hold the line for the majority of the flight until the very end when it would flex back just a little bit.

Westside rates the Tursas at 5, 5, -3, 1. Overall, we’d rate the VIP Tursas at 4.5, 5, -2, 1.25. The flight was very straight, relatively fast with a lot of glide. Once we adjusted to the added stability, the Tursas performed quite beautifully on the course. Looking at the flight chart from inbounds Disc Golf you’ll see the more understable flight path that was initially advertised. We have yet to throw the Tursas in their Tournament plastic, so we can’t state if the Tournament Tursas is more understsable than the VIP version.

The flight path of the VIP Tursas was similar to a slightly faster and more stable Opto Fuse from Latitude 64. When thrown at less than full power the Tursas really provided some nice straight lines with a very controllable flight. When thrown at full power, the Tursas would fly on a very predictable flight with a little turn followed by a small fade. The Tursas makes a very nice addition to the Westside stable of discs and the Latitude 64/Dynamic Discs/Westside family overall.