You are at:Home»Reviews»Drivers»Westside Sword Review 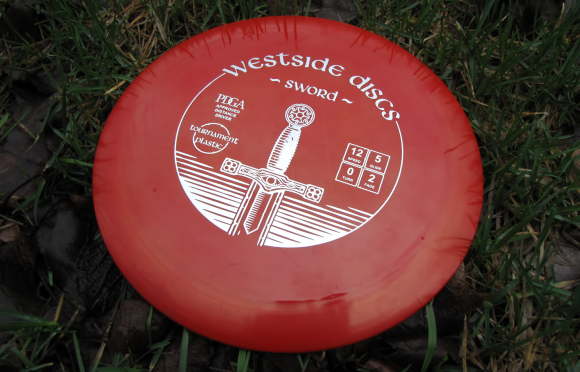 Two of the factors that come into play when making your disc selection are the distance and accuracy needed. Some discs offer big distance but low accuracy while a slower disc might provide high accuracy but sacrifices distance. One disc that provides both distance and controllable accuracy is the Westside Sword.

Westside sent us a Sword in their Tournament plastic to test and it’s easy to say we were impressed. Westside says this about the Sword:

Westside Sword is a speed 12 stable/overstable distance driver with lots of glide and accuracy. The Sword reacts well to different release angles and holds the angle during the whole flight. This makes the Sword great for straight shots, long hyzers and long unhyzers. Westside Sword is suitable also for sidearm throws. You can have most out of this disc if your PDGA rating is around 900-950.

We were excited to try out the Sword at our local courses. The Sword feels quite comfortable in the hand. Westside clocks the Sword in the Speed 12 category. When you get to the high speed drivers, some golfers have a hard time getting a grip of the wide rims. We found the Sword easy to hold and easy to get a grip of. The depth of the rim isn’t super shallow like some of the high speed discs that have recently come out.

When you first throw it, you can see the speed. The Sword is fast. When released with a strong rip, the Sword gets up to speed quickly and really carries down the fairway.

Even with a nice flat top, we did notice nice glide with the Sword. Westside rates the glide at a 5 and we would agree with that. The Sword does like to carry down the fairway at a comfortable rate. Other drivers with higher glide seem to glide a little too far at times.

The feature that we loved the most about the Sword was its stability. Westside rates the Sword with a 0 for turn and a 2 for fade. Our disc in the Tournament plastic showed a little less stability at high speeds — in a good way. When released with a little hyzer, the Sword would flip up flat and shoot straight as an arrow. With a flatter release, the Sword would start to turn ever so slightly. It wouldn’t roll over, just start to track to the right before finishing back to the left. 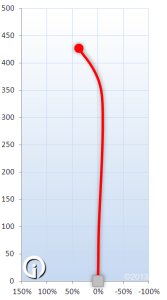 The fade at the very most is a 2 but not much beyond that. It does have enough fade to bring the disc back to the left at the very end of the flight, but don’t expect a very strong fade or skip. If you are facing a headwind, the Sword should not be your first thought. The Sword loves tailwinds though.

If you are needing distance, but need to hit a tight line, the Sword should do the trick. We found it very controllable and very straight. While it won’t play nice in headwinds, if you are facing a tight window, the Sword will fly where you put it. During our tests, we had multiple people ask what that disc was. That is the kind of impression a disc should give when you see it fly for the first time.