You are at:Home»Reviews»Drivers»Westside Stag Review 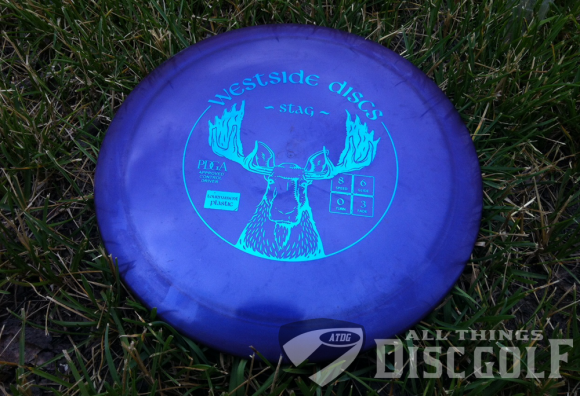 Earlier this year Westside Discs released a trio of new discs including the Westside Stag. The Stag is a fairway driver with a high amount of glide and decent fade at the end of the flight. In regards to the Stag, Westside says, “Precise and reliable stable control driver. Straight flight path and amazing glide.”

Westside sent us a Tournament Stag to get our hands on and see what it could do. Westside rates the Stag at 8, 6, 0, 3. In our tests, the Stag was not as stable as we were expecting in the Tournament plastic. This isn’t a bad thing though.

The Stag is a very fast fairway driver. We could really get the Stag moving down the fairway. While the Stag’s rim doesn’t feel very wide in the hand, it certainly holds some speed. In comparison, the Stag felt and flew faster than a Teebird, but slower than a Firebird. We do agree that the Speed 8 rating is accurate.

Along with the nice speed, the Stag brings outstanding glide. You could clearly see the glide too. Midway through the flight you can see the Stag hook up and hang in the air and just fly. We were able to see some really nice distance out of the Stag. If you are approaching a hole with a decent tailwind, the Stag just needs some air under it and you’ll see it sail away.

The thing that surprised us the most was the Stag’s turn. We were expecting a very stable flight and something that can fight a headwind. The Stag, at least in the Tournament plastic, was not as stable as we were expecting. At high speeds, the Stag would turn during our tests. As we said, this was not necessarily a bad thing, just not what we were expecting. It wouldn’t fully flip over, but it would start to turn a little. 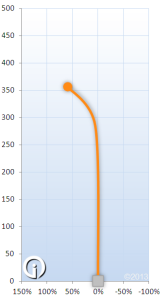 The Stag was able to carve some long s-curve lines with the fade kicking in late in the flight. The Stag does have a moderately strong fade at the end. If the Stag was starting to turn to the right, the fade was strong enough to bring it back to the left. In order to get the turn, we didn’t have to put any extra anhyzer on it. A flat release will help send the Stag on this flight path.

Looking at the flight chart from inbounds Disc Golf you’ll see the more stable flight than what we experienced. We have heard that the VIP stag is more stable than the Tournament Stag.

When you combine the glide and the slightly understable flight at high speeds and moderately strong fade at the end, the Stag will really move down the fairway quickly. Some of our throws with the Stag were some of the furthest throws we’ve had with a fairway driver.