You are at:Home»Reviews»Drivers»Westside King Review

Most disc golf courses (not all) have the favorite “bomber hole.” The hole where you get to grab your favorite high speed driver and rip one down the fairway. One ultra high speed distance driver is the Westside King. The Westside King slots in at the top of the charts at a speed 14.

Westside sent a VIP King for us to test out so we could see the distance for ourselves. Westside says this about the King:

Westside King is a fast stable speed 14 driver good for ultimate distance without sacrificing control. It has a solid reliable flight without being too overstable. Westside King has a relatively high and predictable fade. Higher weights are more stable than lower weights. The King is an easy way to get extra meters to your play.

Westside rates the King at 14, 5, -1, 4. To Westside’s credit, it is hard to find a disc on the market the compares to the King. With a rim width of 2.3 cm, it does feel quite fast and needs a strong arm to get it up to speed. In our tests, the stronger arms certainly had better results with the King than the golfers with slower arms. If you do have the arm, it is safe to say the King will produce some great distance for you.

To add to the high speed, the King also offers some high speed turn to give it some added room to fly. While Westside rates it at a -1, we’d bump it to about a -1.5 or 2. It certainly wasn’t a bad thing though. When faced with a tailwind, or very little wind, the King would get up to speed quickly and start to turn back to the right. If given some hyzer, it would flip up flat and hold that line during its flight. When thrown into a headwind, the turn was just slightly more, but it never rolled all the way over. We gave it a little hyzer into a headwind and saw similar results as to when thrown flat with a tailwind. It will turn, but in a very controllable fashion.

As the King starts to slow down, you will see a strong fade kick in. We might not put it quite at the 4 for fade after our tests, but it does come close. The King always came back out of its turn and finished left during all of our tests. While some tests would produce a fade that you could call a 4, we’d put it somewhere between a 3-4.

Westside also sent us a VIP Air King. Westside’s VIP Air or Tournament Air plastic is the lightweight plastic that is infused with air bubbles in the rim to allow the wide rimmed drivers to be molded at lighter weights. Our VIP Air King was 150g.

First, we must say that in our opinion the VIP Air plastic (and its Opto Air cousin) is the best feeling lightweight plastic on the market today. With the bubbles focused on the middle part of the rim, rather then being brought up to the top, you get a very similar (if not identical) feel to the VIP plastic. There were no bubbles reaching the top creating a rough edge. 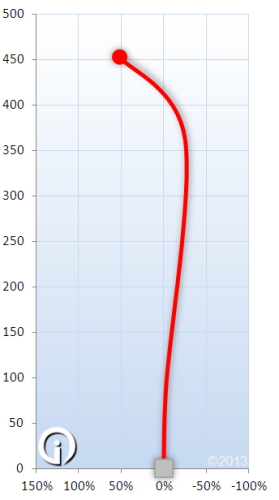 The VIP Air King did produce better results for the slower arms and actually carried a similar flight pattern to the regular heavy VIP King. When stronger arms threw it, there seemed to be slightly more turn in the VIP Air version than in the normal version and the fade was slightly less. While the stronger arms weren’t big fans of the really lightweight discs, the VIP Air King was producing impressive results for the slower arms.

Westside rates the King at 14, 5, -1, 4. In our tests, based just on the heavier VIP King, we’d rate the King at 14, 5, -1.5 to 2, 3 to 4. There is no doubt the King is a very high speed disc. We did notice a little more turn and, at times, slightly less fade. The flight chart from inbounds Disc Golf is a great illustration of the King’s flight. You’ll see a nice sweeping turn followed by a strong fade.

As we stated at the beginning of this post, it is hard to find something similar to the King on the market today.