You are at:Home»Reviews»Drivers»Westside Giant Review 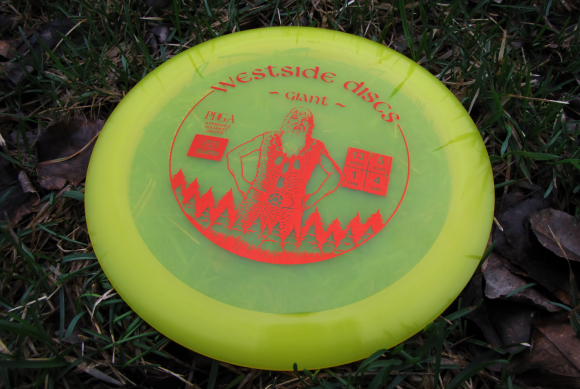 When playing disc golf in the midwest (among other areas), you are often faced with very windy days. 20-25mph headwinds are quite common. As any good disc golfer knows, when you are facing a big headwind, it is time to break out the overstable discs to fight that wind. When it comes to distance and headwinds, the Westside Giant does the trick. Westside sent us a VIP Giant to test for this review.

When you first look at the Giant, you notice the flight ratings. Westside says 13, 5, 1, 4. Seems a little daunting at first. The high speed alone can me intimidating for a disc golfer. Then you add in the positive turn rating and the strong fade and you might think this is too much disc for you. Obviously, if you don’t have a very strong arm, the Giant is in fact too much for you. If you have trouble getting high speed discs up to full speed, we’d recommend you go for something a little slower. If you do have a strong arm though, the Giant is a great disc — and a fun one too.

Luckily for us, one of the local courses is a very wide open course where winds are typically high. This gave us prime testing conditions for the Giant. We had to first try the Giant out with a tailwind just to see how overstable it was. While there was little doubt that the Giant was overstable, it was not as intimidating as we first thought.

We turned around and faced a headwind of at least 15-20 mph. We first gave the Giant a strong throw with a flat release. We actually noticed a very slight turn when thrown into the strong headwind. But, the added stability was able to keep the Giant moving straight and not flip over like other discs would do.

We then gave it a little hyzer when throwing it into a headwind and it would flip up flat gradually and hold that line the entire time. While there was little doubt that the fade was more than a 0, we wouldn’t quite put it at a 1 though. 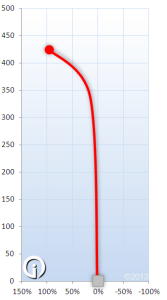 Westside puts the Giant’s ratings at 13, 5, 1, 4. During our tests, we’d put the Giant at 13, 5, 0.5, 4. The flight path provided by inBounds Disc Golf shows the very stable flight path with very little, if any, movement to the right.

The Westside Giant is certainly a fun disc. While you do need a relatively strong arm to make the Giant perform as described, the results are fantastic. The Giant will fight any headwind you run into. The Giant provided us with a lot of fun on the course and proved to be a very useful disc for when the wind kicks up.