The phrase “Yes, there are two Swans in disc golf” is one that many might not expect, but it is indeed true. In 2010, Westside Discs introduced the Swan putter. The Westside Swan was beadless and brought a very controllable and understable flight for a putter. The Swan was out of production for a while and it remained that way until they tweaked the mold and released what would be come the Swan 2. The Swan 2 is a beaded putter with a very similar flight path.

After many voiced their opinion that they wanted to see, what is now known as the Swan 1 Reborn, return to store shelves and eventually their disc golf bags, Westside Discs has re-released the Swan 1.

Westside Discs gives this quick history of the two discs:

The Swan 1 was our original putter and it would fly straight for anyone right of the shelf. Since we had such good feedback we decided to produce the Swan 2, the exact same feel as a Swan with a better flight. The Swan 2 holds the line a little better and can be used in the wind with success. The Swan 1 was designed to give lower arm speeds a straighter putting line, the Swan 2 will give all players that long straight putt they have been looking for on the course.

Dynamic Discs sent us a Westside Swan 1 Reborn to check out and this was our first time throwing a Swan 1 of any type. We’ve thrown the Swan 2 before and we can see what all the hype is about.

The Swan 2 has an average depth for a putter. There are shallower options out there, but it certainly isn’t as deep as the Latitude 64 Dagger. The bottom wing is actually a little concave and will naturally find a home in your grip. The different shape is quite comfortable even with how different it is.

The flight itself is what makes the Swan 1 Reborn stand apart. It is understable. No doubt there. The key is trusting the disc and using it as more of a finesse disc than one you just power into. We’ll start on the teepad and move our way into the circle (where it is stronger).

When thrown at full power, you should expect to see the Swan 1 Reborn turn pretty quickly. Even when released with a little hyzer, it will flip up flat, and then kick into a turn which it will hold for the entire flight. In fact, it seemed more understable than the Swan 2. The Swan 2 would still turn, but never quite to this level. It was a little touchy at high speeds and took some getting used to before we figured out the true flight that it was trying to pull off.

If you give it some room to fly and just give it a full power throw, you’ll be able to pull out some pretty easy turnover shots. The turn begins early and once it hits that line, there is no coming out of it. There is virtually no fade with the Swan 1 Reborn—once it has a line, that’s all you’re going to get.

You don’t want to give it to much power to where it will start to turn over, you just want to help it on that initial line and let the disc do the work. It’s finding the combination of release angle and power that is key on approach shots. If you dial it in right, you’ll have some of the straightest approach shots available. Remember though, you won’t be getting any fade, so these are the types of shots where you go right at the basket instead of playing a little fade.

Finally, inside the circle, the Swan 1 Reborn is truly a disc where you just go right at the center of the chains. You won’t get any fade to have it crash into the basket. It is up to you to make it happen. On longer putts, you can still aim on a pretty straight line since it won’t fade too much. You might have to give it a little extra height to get there, but give it some confidence and let it fly. 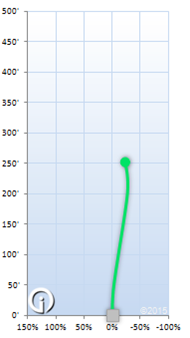 The flight chart from inbounds Disc Golf shows this understable flight you can expect. It will first kick in early in flight and it will hold that before finishing on a similar angle.

The Westside Discs Swan 1 Reborn is a welcome (re)addition to their lineup. Having a disc that can be a flippy and controllable approach disc out of the box is nice. It might not be the first option at high speeds, but once you power it down a little bit, your control over the disc should rise. Finding the right combination of release angle and power is key, but dial that in and you have a very useful disc in the bag.

Inside the circle, go at the basket with confidence and let the Swan 1 Reborn do the work.

Win your own Swan 1 Reborn

A big thank you to Dynamic Discs and Westside Discs for including an extra disc to give away to our readers. We’ll throw in the one we used in testing so two readers can walk away with some new plastic. There are two easy ways to enter:

The @WestsideDiscs Swan 1 has been reborn! @ATDiscGolf has a pair of these putters to give away! http://is.gd/ATDG_SwanReborn #discgolf

We’ll take entries through Wednesday, September 9 at 11:59 p.m. central time. Winners will be announced on Thursday on our Facebook page.