You are at:Home»Reviews»Drivers»Westside Discs Sorcerer Review 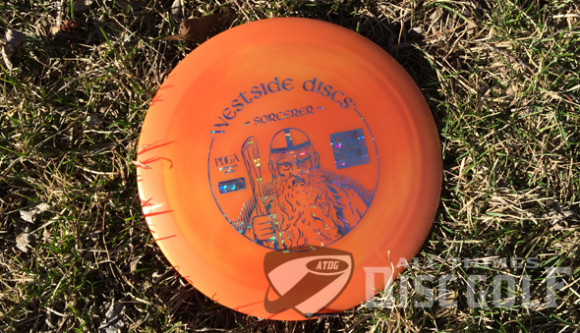 Right on the heels of the release of the Westside World, Westside Discs has come out with another high speed driver with a similar feel to the World. The Westside Discs Sorcerer might appear at first glance like a very stable driver, but after our tests, that wasn’t quite the case.

Dynamic Discs sent us a Sorcerer to review and in our tests we didn’t experience the stable flight that was advertised on based on Westside’s flight ratings, but what we did experience can be quite desirable. Westside gives the Sorcerer ratings of 13, 6, 0, 2. In our time with the Sorcerer, we’d give it a little more turn and maybe a touch less fade.

The Sorcerer is composed of the World’s top part and a new bottom part. The rim is slightly thinner than the World and does lead to slightly less speed than the World. It feels bigger in the hand that it really is and feels like a high speed driver that is ready to fly. It is a very comfortable feel, but if you aren’t a fan of big rims on your drivers, it might turn you off a little bit.

About midway through our tests we were trying to think of which disc the Sorcerer reminded us of. After a while it finally clicked. The Sorcerer is very similar to a slightly slower Westside King. The King has a notable amount of turn and a small amount of fade. The Sorcerer was nearly equal to the King’s numbers in our review.

While fast and with an above average amount of glide, the Sorcerer is a very straight distance driver. The turn is there, but it isn’t dramatic. While Westside gave it a 0 for turn, we’d bump that back a bit to somewhere around a -1 or -1.5. It is what we often refer to as a “stable turn” in which it will show turn and track right, but never with a very large amount.

At the end of the flight, it will finish left, but don’t expect very large skips or big knifing fades out of it. If you’re facing a hole where you have to hit a window early before a clearing or you are going from wide open area to a tight window at the end, the Sorcerer can be trusted to be controlled. It can react nicely to a little hyzer or a very controlled flat release. 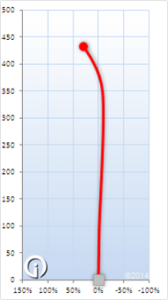 If you do have a stronger arm, giving it a little hyzer will give you great results. You’ll likely see more of the -1.5 amount of turn and a little added hyzer can go a long way. Like we said, if straight line distance is what you’re looking for, the Sorcerer can do it.

Overall, we’d rate the Westside Sorcerer at 12, 5, -1 to -1.5, 1.5 to 2. While it isn’t as stable when looking at Westside’s ratings, it is still a very straight disc. It can handle some power and loves to get down the fairway quickly.

Inbounds Disc Golf’s flight chart shows something very similar to what we were seeing. A little turn with just a touch more fade. Oh, you can’t complain about the distance either.

The Westside Sorcerer is a pure grip and rip disc. You won’t have to worry about it hyzering out too quick and fading out too hard. Power throwers will see a touch of turn and just a dash of fade. While a big wide open hole will be calling for you to throw the Sorcerer, you can also trust it on the tight holes too.