You are at:Home»Reviews»Putters»Westside Discs Shield Review

The putter for the 2014 Trilogy Challenge comes from Westside Discs. The Westside Shield is moderately deep, beadless, and very stable yet flies on a very straight line.

The Shield was initially released in Westside’s BT Medium plastic and is now available in BT Soft. The BT Medium has some give to it, but is still firm around the edge. While we say that it beadless, that is sort of true. It almost feels as if there is a bead there and one could argue that it actually does have a bead. With how the edge is formed, it almost creates a microbead, but it all blends together. It is different from a Dynamic Discs Judge or an Innova KC Aviar, for example.

Dynamic Discs sent us a BT Soft Shield for this review. Our initial thoughts below are in the Medium Shield. We’ll detail the Soft Shield next.

When inside the circle, the Shield is deeper than the Dynamic Discs Warden and does have a similar feel to the Judge in terms of depth. While the Judge has a very round nose, the Shield is blunter on the rim. The depth is something that some might not like, but at our Trilogy Challenge we heard one positive comment for every negative one. Like with any putter, it is all up to personal preference. In any of our reviews, putters is the hardest type of disc to review.

For us, the Shield was a great driving putter. It was a disc we could really power into and trust it would fly on a straight line. At high speeds the Shield was very stable. The Shield will hold the line you release it on and will carry down the fairway as intended. Don’t expect any turn with the Shield. Even when thrown into a headwind the Shield flew very stable.

What makes the Shield unique is how it powers down. It doesn’t have a lot of glide and doesn’t have a lot of fade. It will technically finish to the left of the line it started on, but not my much. It is virtually a point and shoot putter, but don’t expect great distance with it. The lack of glide helps with control, but does take away in the distance department. If you keep the Shield on a low line, you better hope you gave it some power because it won’t hang up there long. On bigger hyzer shots, it liked the added height, but didn’t carry much further.

The BT Soft Shield had a near identical flight to the BT Medium version. Soft putters weren’t the personal preference of most of our test team, but a the same time, some were loving it.

When compared to the Westside Swan, the Shield is much more stable. It slots in nicely between the Dynamic Discs Judge and Warden. While the Warden flies with a touch more turn and has a similar flight, the Shield will do it with less turn and less fade. 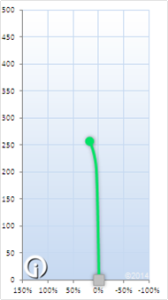 Westside Discs gives the Shield ratings of 3, 3, 0, 1. Overall, we’d rate the Westside Shield at 2, 2, 0, 0.5. There isn’t a lot of speed or glide to mention, but it is quite stable at high speeds. It will resist a turn no matter how hard you throw it. Even with how stable it is, it ends with a very small amount of fade. As the speed decreases, the Shield will drop out of the air and settle down to finish a very straight flight.

The flight chart from inbounds Disc Golf illustrates a flight we were experiencing with the Shield. You’ll get no turn with just a hint of fade at the end. It won’t be the longest putter you throw, but you can put a lot of trust into this one.

One of our best throws with the Shield, especially the soft version, came on a hole that we typically don’t throw a putter on. There is a big hyzer route that you typically would throw an overstable midrange or fairway on. There is plenty of room to the right to give it some room to fly and then fade in. Just for kicks we brought out the Shield and wanted to see just what it would do on a big hyzer shot like this. We gave it quite the rip with some added air under it and saw one of the best throws ever on this hole.

It held a small hyzer angle the entire flight and reached it’s peak height and started to just fall as it faded. It didn’t fade hard which helped it remain aloft and soon found itself about 10 feet from the pin. Maybe it was the perfect throw. Maybe the conditions were ideal. Regardless, if you can put some power in to the Shield, it will fly. It just needs your help to make it happen.