You are at:Home»Reviews»Drivers»Westside Discs Seer Review

The ability to throw a controlled shot with a fairway driver is a trait that many disc golfers not only want to have, but you could argue they need to have as well. You need the control of a midrange, but the added distance is key. You don’t want a disc that is too understable, but it does need to have a little turn to it.

The Westside Seer is the latest attempt to capture the right combination of control and distance. Dynamic Discs sent us a new Seer to review and we’ve hit some really nice shots with this new fairway driver.

We typically don’t note the flight numbers at the start of a review, but in the sake of the Seer, it is worth noting. The stamp on the Seer says 7, 5, -1, 2. From what we understand, the stamp is slightly incorrect with the true numbers being 7, 5, -2, 1 according to Westside itself and in reality, those are closer to what we experienced on the course.

The Seer has a rim that is hard to dislike. The rim isn’t very wide and is very easy to grip. The top has a very small shoulder before a gradual dome across the entire flight plate. It isn’t a pop top, but just a smooth dome from edge to edge. It has a similar feel to Innova’s Leopard, but the bottom of the rim is slightly more concave on the Seer.

In our tests we saw two types of shots where the Seer shined: controlled anhyzers and straight finesse shots. With a flat release you can really make the Seer hit some nice anhyzer lines. It is important to remember to let the disc do the work though. If you try and power into it and force it into an anhyzer, it might show a little too much turn and too much left to right movement.

On these anhyzer shots we’d try and put our release on a line more or less straight off the teepad and let the disc work. If released flat, the speed in which it flew determined the amount of turn it showed. This caused a very gradual turn, but it would hold that turn the entire flight. On many holes where we wanted this big left to right movement the Seer could really hit some accurate lines. It wouldn’t turn too quickly though. Once you can get a feel for the height it needs, you’ll have a very controllable fairway on your hands.

As we said, the straight finesse style shots were also quite effective. We could give the Seer a little hyzer on release and produce some tight s-curve style shots. The key is to find the ratio of power to hyzer angle. If you take a little power off of the Seer and release it with a flatter release (with a hint of hyzer) you’ll get a straighter flight with a small finish to the left. Giving it more power and a larger hyzer angle will still give you a straight flight, but it will likely flip up to flat, show a little turn, and then a very soft fade back to center. The end result can be very similar, but being able to control the distance can really give you an accurate fairway driver.

What surprised us the most was the ability for the Seer to fly into a slight headwind. For an understable disc, it can hold up when thrown properly. It will need a little hyzer though. Into a moderate headwind we released the Seer with some hyzer and watched it carry out a very tight turn before a very small fade to make it finish back on center. We wouldn’t necessarily recommend the Seer for most headwind shots, but it isn’t a slouch.

The fade of the Seer is minimal, but will have a little bit of a natural finish to the left. It will be enough to break it out of a small turn, but nothing that will produce any big skips. It’s really the type of fade you want on an understable flier like the Seer. The anhyzer angle or very straight flight is what you’re wanting out of a disc like this. 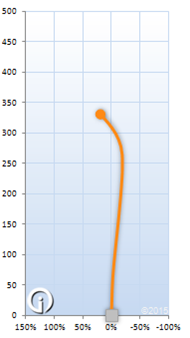 Overall, we’d rate the Westside Seer at 7, 5, -2, 1. You get a nice understable flight, but it isn’t overly flippy. You can figure out the power to hyzer angle and get a very controllable disc.

The flight chart from inbounds Disc Golf shows a flight close to what we were seeing on throws where we took a little power off of it, or gave it some hyzer on release. It’s a very straight flight with a subtle finish.

We often carry in our bags a fairway driver or two that are on the stable to overstable side of the flight chart. Having a disc that can be controlled and have a slightly less stable flight can really take your game to the next level. You’ll get some added distance over a midrange disc, but with the same control. The Westside Seer is a great fairway driver that can really carve up a course. Trust the disc to do the work and you’ll find yourself next to the basket in no time.