You are at:Home»Reviews»Drivers»Westside Discs Hatchet Review 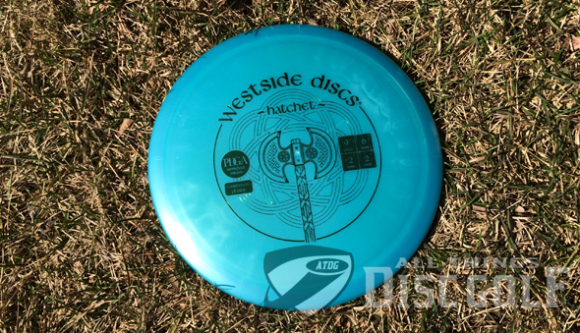 Beginning to experienced disc golfers and anyone in between are often in search of a control driver that can sit between a fairway driver and distance driver. They are in the need of something with great control that they can rely on for many shots. The new Westside Hatchet falls exactly in this category. With an understable flight and great glide the Hatchet can be sneaky long.

Dynamic Discs sent us a Hatchet to review and it was clear to our testing team that nearly any skill level could find use out of the Hatchet. The Hatchet clocks in at about the speed 9 level of discs. The rim isn’t too large to scare away newer players, but large enough to produce some nice distance. The feel in the hand is a little unique. The top of the Hatchet is the same as the Westside Underworld while the bottom is a new mold. As with the Underworld, the top is very rounded without much of a flat top at all. This makes it feel slightly deeper than normal in the hand, but you have plenty of room to power grip it.

While it does have some speed, the Hatchet’s glide is very noticeable. Right as it gets up to speed, you can really see the glide kick in and help keep it aloft. You can keep it on a nice low line and trust it will hang in the air and coast down toward the basket. This glide will please beginner players as they can get some extra distance. Experienced players will also benefit from the added help on drives.

The Hatchet is on the understable side with a touch of fade at the end of the flight. Expect to see some turn at high speeds. The amount will vary based on your arm strength. If thrown flat or with a little hyzer it will kick into a turn and track right a little, but it won’t roll over and hit the ground. It can be a great hyzer flip machine though. It likely won’t flip up and hold a completely flat angle, but will fly on a tight s-curve which can really help distance.

The Hatchet’s fade is there, but it isn’t a lot. It will have enough to break it out of a turn, but not much more than that. If it is flying flat, it will finish left. If it is in a pretty good sized turn, it will start to return to center, but never quite break that center line. The slightly slower Underworld has a little less fade than the Hatchet. 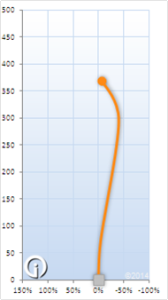 The flight chart from inbounds Disc Golf shows this long, understable flight we were experiencing. When thrown correctly, the Hatchet can be sneaky long.

Another way to describe the Hatchet is a less stable Dynamic Discs Escape with more glide. If you’re a fan of the Escape, you’ll understand that is not much to disagree with.

The Westside Hatchet has a great combination of glide, speed, and an understable flight. Once you figure out the release angles needed, the Hatchet can easily carve a slot in your bag. It can be a great introduction into the speed 9 drivers for beginners and a great control driver for experienced players.