You are at:Home»Reviews»Putters»Westside Discs Harp Review 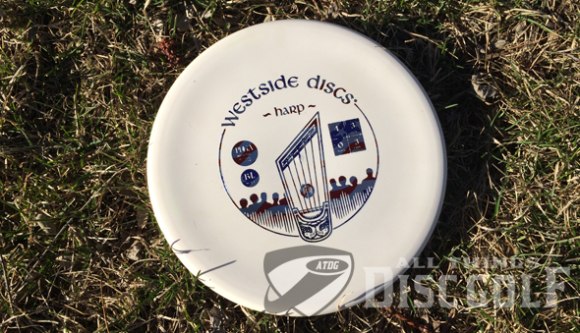 Westside Discs’ latest putter comes in the very overstable flavor. The Westside Discs Harp is Westside’s second putter in conjunction with the Swan. While the Swan is understable and a favorite of many disc golfers, the Harp is on the other side of the spectrum and it has no intentions of returning to the understable side of things.

Dynamic Discs sent us a Westside Harp to review and with our first throws there was little doubt just how stable the Harp really is. The Harp is a disc that doesn’t like turn, loves a headwind and will stick where you throw it.

You can dig hard into the Harp off the tee and expect it to hold the line you put it on. Don’t expect it to kick into a turn at all. If you gave it some hyzer, it will hold whatever angle you put it on and remain that way for the entire flight. While we expected an overstable flight, we were a little taken back by just how stable it was at high speeds.

If you wanted a short little flex shot, the Harp will break out of an anhyzer pretty quickly. In fact, it never really started into head to the right at all. It flexed out really quickly before kicking into a fade. The stability at high speeds is equal to that of a Rhyno, Zone, Gator type disc. You want to avoid turn? The Harp will avoid turn.

When throwing a disc this stable at high speeds, you should also expect a decent amount of fade at the end of the flight. The Harp also delivers on that front as well. Because of the lack of turn, when it is ready to kick into the fade, it will do so quickly. It isn’t a very hard penetrating fade, but finish left and do it on a regular basis.

Even with the strong fade, the Harp’s BT Soft plastic will keep it from skipping much at all as it hits the ground. The softer plastic allows it to lose energy pretty quickly. Because of this, we found the Harp to be a great approach disc. You won’t see any turn from it and once it hits the ground, it won’t move much.

The Harp has very small feel in the hand with a slightly concave top. The slightly sunken gives you a great sense of control on the Harp. It is very easy to fan grip for shots off the tee or on a little approach. Now, the concave shape does take away some of the glide, but for little approach shots, you won’t be missing it. 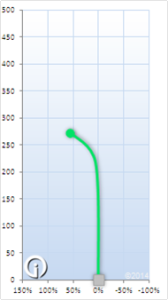 While it isn’t the most common style of putter to reach for, we could see people liking the Harp for inside the circle as they aim for the chains. Because of how stable it is and the very shallow profile, we could see spin putters really liking it.

The flight chart from inbounds Disc Golf shows a flight virtually identical to what we experienced. You won’t see any turn to be followed by a decent amount of fade. Because of the lack of glide, you can really put just about everything you can into it.

The Harp is close to a Zone/Rhyno hybrid. You get a very straight and stable flight combined with very little glide. The BT Soft plastic allows the Harp to hit the ground and stick pretty quickly. It won’t produce very large skips at all.

From off the tee and approach shots to putts from inside the circle, the Westside Harp is a great addition to Westside’s lineup. With the understable Swan as their only other putter, the Harp is a great compliment and should prove useful for many disc golfers.