You are at:Home»Reviews»Midranges»Westside Discs Bard Review

Many disc golfers have their favorite midrange they reach for time and time again. This is typically a midrange with a straighter flight. At times though you’ll find yourself needing a midrange with a little added stability to fight wind or fade a little harder at the end of the flight. The new Westside Bard slots in that category of a midrange that could solve what you’ve been looking for.

Dynamic Discs sent us a Bard to review and we lined it up against the Verdict and a few other midranges on the market.

At first glance the Westside Bard will remind you of the Dynamic Discs Verdict. Initial flight numbers are similar, but the overall flight and feel of the Bard is a little different. The Bard does have a bead with a decently sized concave wing. The Verdict on the other hand is beadless and offers a slightly shallower concave shape.

There seems to be two parties when it comes to the bead on a midrange. Some love it. Some hate it. The Bard’s bead is large enough to be noticed, but it isn’t anything too extreme. It really blends into the wing instead of just sitting on the bottom of it. Don’t write off the Bard just because of the bead.

If we judge the book by the cover, the only difference in terms of flight numbers between the Bard and Verdict is the fade. The Verdict clocks in at 3.5 while the Bard only cards a 3. The Verdict does have a little added energy to the fade and the 3.5 rating always seemed accurate to us. Even beyond the initial impression, those numbers translated well to the course.

The flight of the Bard will seem very familiar even if you’ve never thrown it before. It isn’t going to do anything unexpected—which is a good thing. You’re expecting a flight with a decent amount of stability at high speed before a predictable finish at the end and that’s exactly what you get.

We were able to really give the Bard some power and time and time again it would show a lot of resistance to turn and maintain a nice amount of stability. We could trust it on lines where we needed it to not head to the right at all and remain in bounds on many throws.

Now, the end of the flight was where we saw a little difference between the Bard and it’s Verdict cousin. The Bard will fade. There is no doubt about that. It just won’t do it with a lot of added energy. The Verdict’s fade always came off with a little added oomph to it. The Bard’s fade on the other hand was a little more predictable. The fade was strong, yet smooth. It had one level of power at the end once the fade kicked in. This allowed for a lot of accuracy time and time again.

Some might be looking for a midrange that can be a big wind fighter, but we feel the Bard isn’t quite that disc. It will fade, yes, but it isn’t that strong of a fade. If you give it some hyzer on release and enough power, it will likely hold that initial angle and could help fight that wind, but it will need a little help from you.

Distances for the Bard fell right in line with the Verdict and other midranges. We could throw them on back to back throws and find the within a few feet of each other. There is a decent amount of glide to help it down the fairway, but it won’t glide too much. Give it some power and let the disc do the work.

The Innova Roc or the Buzzz OS are two discs that can also compare to the Bard. The flights are similar, but the feel of each disc is slightly different. The Buzzz OS is beadless in comparison to the Bard, but the Bard has a completely different rim and shoulder than the Roc. 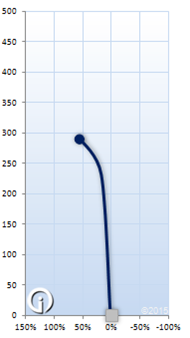 Overall, we’d agree with the initial flight ratings and rate the Westside Discs Bard at 5, 4, 0, 3. A little added speed for a midrange with no turn before getting into a predictable fade.

The flight chart from inbounds Disc Golf shows a flight similar to what we saw. We weren’t seeing quite as much high speed stability in our tests, but the finish and distances seem accurate.

The Bard isn’t a disc you will turn heads with on most shots. If you’re practicing in the field the Bard will give you a very trustworthy flight. Don’t take that as a negative though. You’ll get to a hole where you need just a little bit fade to finish off a shot and park it next to the basket and the Bard will do just that. You can easily reach for the Bard as a complement to a straight midrange time and time again.

We often talk about the power of the predictable finish in a midrange and the Bard certainly fits into that category. Even if the flight isn’t that sexy, the ability to trust a disc’s flight might be one of the most powerful features of any disc. The Westside Bard is one of those discs.