You are at:Home»Instruction»Well-known turnover shots: when to use ’em and how to throw ’em

Among the pleasures of disc golf — and there are many — perhaps the most satisfying for the athletically-minded is mastering new flight paths for one’s disc. And since all discs to one degree or another have the natural tendency to fade left or right depending on the direction of the spin, making a disc turn in the opposite direction of that fade is among the first big milestones. And then you realize that within the broad classification of “turnover shot” exist an endless quantity of different shot-shapes and ways to achieve them, and things really begin to get interesting. And fun.

A while back we published a post called “Mastering the turnover shot: Equal parts art and science.” In it we explain in pretty good detail the handful of ways of executing flight paths variously known as a turnover shot or anhyzer. (You can check out our Disc Golf Terminology page for definitions of all these terms.) We recommend reading the previous post before reading this one. This post explains specific flight paths that can be achieved by adjusting any of six different factors, and those are listed and described there.

Most anhyzer flights of any distance require extra height. Note not only the angle of this player’s disc but also the height of the release point.

Let’s start by explaining the term ‘S-turn’, which describes the flight path rather than throw itself. It simply refers to a flight path where the disc turns in one direction for the beginning of the flight, then finishes by turning in the other direction. You’ve like done it before, by accident if not by design. Being able to properly execute an S-turn represents a huge step forward for any player, and once you understand how to do it it really isn’t any harder than turnover shots intended to arc in a single direction the entire flight. And it not only proves useful when two turns are required. It’s also a great way to maximize distance as the turns keep the disc in the air longer.

To hyzer a disc means to release it with a nose angle that encourages the disc to fade in the direction it naturally tends to fade. For instance, a right-handed backhand shot will fade to the left. So to throw an anhyzer in that same situation a player must release it with a nose angle that not only enables the disc to resist that tendency to fade, but turn in the other direction. An RHBH thrower uses a nose angle where the left side of the disc is lower than the right, so that same thrower — if she wants to throw an anhyzer shot — needs to reverse that nose angle so that the left side is higher than the right. Think of driving a car with your hands “10 and 2″ on the steering wheel, and imagine a straight line between your hands. When you turn left, your left hand becomes lower than the right and that straight line mimics the nose angle you’d want on your disc for a hyzer release. A right turn mimics the angle for an anhyzer release (Again, see the previous post for a correct explanation of hyzer/anhyzer as anhyzer and turnover are not synonymous.)

Sticking with our RHBH example, an anhyzer S-turn shot will initially turn to the right, then at some point fade back to the left. This shot comes in handy when the hole presents early obstacles on the right side of the fairway that force the player to start the shot on the left side, while also having characteristics that make it undesirable to let the disc finish in that direction. For instance the hole has a wall of early trees on the right side and on the other side of the trees is a deep ravine or a water hazard. The basket is on the left side of the fairway a little deeper than the ravine/water, behind another grove of trees.

The trees on the right are too high for a simple tall hyzer route, so the player must throw through the gap on the left, but she can’t throw straight at the basket without heading right for the grove on the left. The solution is the anhyzer S-turn, because it first avoids the trees on the right by passing through the gap, then (because it is turning right thanks to the anhyzer release angle) passes to the right of the grove on the left. This much could be accomplished with a simple anhyzer shot, but remember if it finishes right it’ll find the ravine/water hazard. So it is imperative that the disc finish left.

The two keys to pulling this off are knowing the discs in your bag and the release point required for each- and that only happens with practice. Get out in a field and throw all your discs with the same amount of power and same nose angle. The understable discs will likely turn over and never fade back, while your super-overstable disc may hardly turn at all before fading back to the hyzer angle. Since every situation is somewhat unique, you’ll want to eventually learn how to do this with as many of your discs as possible. It’ll require different combinations of those six factors explained in the last post, which is why it’s important to really know each disc’s characteristics.

We mention release point because this is usually the biggest hurdle players have in learning to throw this shot. If you release the disc at too low a point with a steep anhyzer nose angle, it will head straight for the ground as it turns over and never have a chance to fade back. A fairly typical release point for an anhyzer S-turn is eye level or higher, but it is differs depending on the player’s armspeed, the disc, and the situation.

The flight path for a flip hyzer (or hyzer flip) S-turn is the reverse of the anhyzer S-turn. It’s usually the easier S-turn shot to execute because for most players throwing with a hyzer angle comes much more naturally. However, a key ingredient to executing this shot is above average armspeed, so if you’re having trouble with it that may be the reason.

The term “fllip hyzer” accurately describes this flight path. When done properly the RHBH thrower releases a throw on a hyzer angle with enough power for the rate of speed to eventually overcome that hyzer angle, causing the disc to turn over and drift right. The really cool thing about this shot is that by dialing up just the right mix of nose angle, armspeed and release point (and of course the disc chosen matters as well), the thrower can manipulate the precise point at which the disc turns. For instance, a steeper hyzer angle will make the disc take longer to turn over, while increasing the armspeed will make it happen quicker. 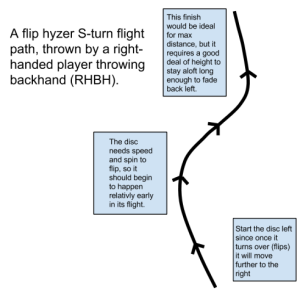 Even though the flight characteristics of a flip hyzer shot are the reverse as an anhyzer S-turn, it isn’t used in quite the same way. A player will typically utilize it in two scenarios:

Once again, the only way a player can master this shot enough to have confidence in the technical situations in which it is required is through hours and hours of experimentation and then repetition. It’s also worth noting that both these S-turn methods can be used to achieve a roller shot, where the player is intentionally causing the disc land on an anhyzer angle with enough power left to stand up and roll.

As discussed in the previous post, for most players throwing a disc perfectly straight is harder than making it turn. So it should not be a surprise that making a disc turn over and then hold a particular line once it has turned is for some even harder. On courses with baskets placed in harrowing positions (near OB, water, cliffs) a straight, flat landing is often the only way to avoid trouble. Like the S-turn shots it requires a very exacting combination of angle, speed and trajectory, but in this case another specific factor is even more important. And that factor is . . . spin.

Think of it this way: If a player wants to throw RHBH anhyzer that turns over through its entire flight he’d throw a disc he knows will continue to turn with a steep enough nose angle. If he wants the disc to turn most of the way then fade left at the end (anhyzer S-turn), he could use the same technique but switch to a sufficiently more overstable disc. But if he wants the disc to execute a right turn at a certain point then very gradually come out of the turn and finish on a straight line, merely changing discs won’t cut it.

Unlike most shots, where as number of factor combinations result in roughly the same flight path, this requires an increase in spin and nose angle steepness proportionate with the distance the disc needs to carry on that straight finishing line. Spin can be increased by accentuating that whip-cracking, towel-snapping release and reducing the follow through of the arm. A good way to learn this is to pick out the apex of the intended flight path, which should act as a hinge that connects the first part of your throw with the second. Aim for that hinge with the idea that your disc will reach that apex with the right angle and lots of spin, then use that spin to coast on the exact straight line you want.

This type of shot is particularly handy on shorter shorts where you can use a fan grip and a putter, but it can be thrown with a power grip as well.