We’ve now seen three national tour events pass – the Memorial Championship, the Glass Blown Open, and the Masters Cup – but the disc golf season rolls on. Touring disc golfers have a couple of weeks off before the next national tour event, so many of them took this past weekend off to rest. However, plenty of disc golf was still played throughout the country so we have 3 pro A-Tier events to recap. Ben Callaway took down the 2015 Discraft Great Lakes Open in Michigan, Alex Geisinger won at the famed 2015 Minnesota Majestic, and Paul McBeth cruised to another victory at the 37th Annual Norman Pro/Am.

As many of you may know, the midwest is getting hammered by rain these last couple of weeks. Paul McBeth headed back home to Oklahoma with touring partner Nate Sexton, only to find that the courses for the 2015 Norman Pro/Am were flooded with 20+ inches of rain. This didn’t stop the event though, as locals rushed to make the courses playable for the longstanding tournament. McBeth and Sexton were two of a handful of 1000-rated golfers in the 30 man field, and McBeth showed everyone why he’s the reigning three-time world champion.

With four rounds of 18 and a final 9, the Norman Pro/Am is pretty long for the average A-tier. McBeth came out on Saturday and crushed the competition in the first two rounds. His 1069-rated 45 in the first round and 1081-rated second round were good enough to build a 6-stroke lead over Ron Convers heading into Sunday. McBeth has been dominating in 2015, and this past weekend was no exception.

Sunday actually wasn’t quite as spectacular for McBeth. He shot two uncharacteristically low-rated rounds: a 1012-rated 55 and a 1008-rated 54. These are still great rounds for the average disc golfer, but you have to think that McBeth wasn’t all too pleased giving up some of his lead. Nate Sexton was able to gain a lot of ground on McBeth, shaving the lead down to 3 strokes heading into the final 9. As is so often the case, McBeth really turned it up a notch in the final 9, shooting a 1084-rated 23 to cruise to a 9-stroke victory over Sexton. Even when you think you’ve caught him on an off day, McBeth finds a way to win big. 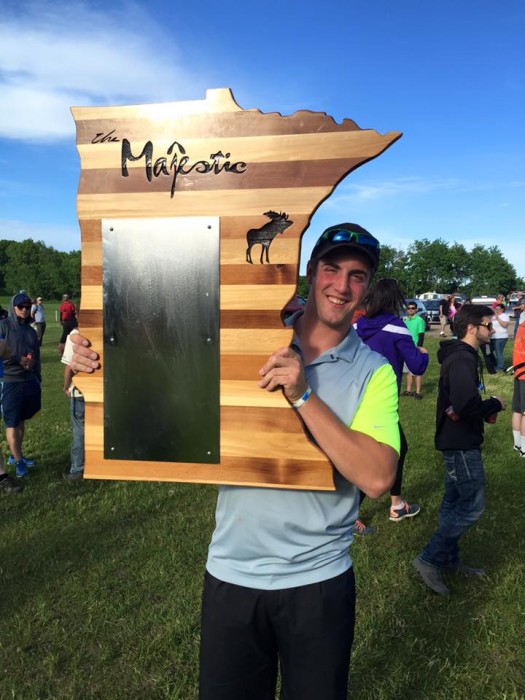 The 2015 Minnesota Majestic, run by Minnesota’s own Cale Leiviska, consisted of just two rounds. These weren’t your ordinary two rounds, though. The pros had to take on two 27-hole monsters at Kaposia and Blue Ribbon Pines. Big name pros like Alex Geisinger, Leiviska, and Steve Rico took to the courses to battle it out for the title.

After the first round, it was clear this event was going to be a two horse race between the local touring pros, Geisinger and Leiviska. With 1053-rated 70s, the two Minnesota pros took massive leads over even Rico. Clearly it pays to have some home course advantage. Heading into the second round at Blue Ribbon Pines, Geisinger and Leiviska had at least a 5 stroke lead over the field.

Round 2 was more of the same as the leaders outplayed the competition. However, Geisinger edged out Leiviska to take down the event. With another round rated in the 1050s, Geisinger was able to squeak by for a 3 stroke victory. It was Geisinger’s second straight Minnesota Majestic title.

Big names like Paul Ulibarri and John E McCray were in the Discraft Great Lakes Open field along with 2014 champion Tyler Horne. However, none of them were able to outplay new champion, Ben Callaway on the temporary Toboggan course.

Callaway didn’t get out to the big start the McBeth and Geisinger did this weekend. After his 1015-rated first round, Callaway fell behind both Ulibarri and Horne, 3 strokes back of the lead. On such a long and challenging course, there was a lot more time to make up ground, and Callaway did just that.

Callaway didn’t exactly light it up in the second or third round. He shot a 1035-rated 53 and a 1046-rated 55 to finish the event. The name of the game on the long course was consistency, and Callaway proved it. Ulibarri’s 1017-rated 55 in the second round dropped him just low enough for Callaway to hold on. After a tight final round, Callaway came away with a 1 stroke victory over Ulibarri, and a sizable lead over the rest of the field.

On the women’s side of things, Catrina Allen cruised to a huge 13 stroke victory over Ragna Bygde, showing that she was more than capable of handling the long, arduous Toboggan course.

This week was a bit slow for the big name touring pros, but next weekend they’ll be heading out to the Pacific Northwest to gear up for the next NT event, the Beaver State Fling. Many pros will play in the Fort Steilacoom Open in Washington. Other pros may play in the Tennessee State Championships or the Zoo Town Open in Montana. Regardless of where the big tournaments are, we’ll be here to recap them for you.