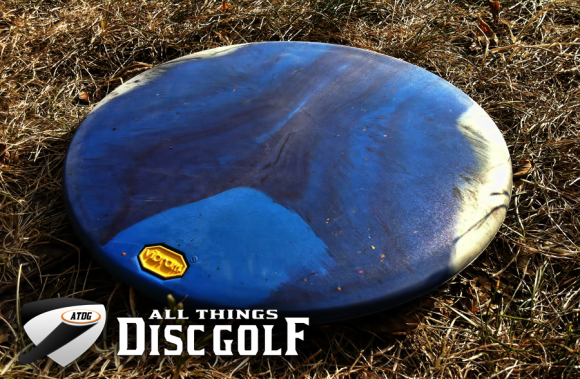 The latest disc from Vibram Disc Golf is out on the market! The Vibram Obex. This overstable midrange is closely related to it’s stable cousin, the Ibex. The Obex is the Ibex with the bead from the popular Vibram Ridge putter added to it. I took it out on the course for a full test to compare it to other midrange discs. If I could sum up my feelings in one word: wow.

Before we jump into my review, lets take a look at the video from Vibram on the Obex starting Vibram team member Dana Vicich.

I do throw a lot of midrange discs. Right now my bag holds the Ibex, two King Cobras, one Gator and one Buzzz. I’ll reach for a midrange on anything between 240-270 feet. Depending on the wind and the hole, I could pump one out a little beyond that. Needless to say, the midrange disc is a big part of my game.

The Obex I got to throw was of the X-Link (medium) variety. When I opened up the package the new blue color really popped. Vibram in the past has ran a lot of earth tones. Say goodbye to the earth tones and hello to these new colorful options. I’ve seen some bright reds and greens in stores too. They all look great.

I quickly put it in my hand and wanted go get a feel for it. It felt exactly like it was described. An Ibex with a bead. I love how flat my Ibex is and this one is no different. It might have just a little more dome on it, but that might be just the case between the two discs I was throwing. It is a very comfortable disc to hold.

I throw 99% backhand and tend to have a pretty good snap on my throws. I wanted to see just how much the Obex could handle. I was quite surprised with what it could do. On a tough uphill shot I was able to get it to really hold a straight line. At the end it has a very smooth fade. It was stil moving forward but just starting to move to the left. With the X-Link rubber, it also stuck when it hit the ground. You won’t get any major skips with this disc.

The other thing that stood out on this disc was the glide. It hung in the air longer than expected. I was able to get probably another 15-20 feet out of some throws just by the glide alone. Without any scientific tests, it has more glide for me than my King Cobras.

If you have a tight line to hit, but still want a little finish to the left, this disc can handle the snap. It always settled out on me. If you give it a little hyzer, it will ride that line the entire time.

The flight was very predictable. Once you learn the amount of fade you’ll be able to pick out some nice sweeping lines with this disc.

The one thing I haven’t been able to do is throw it in major wind yet. Many times I play, we’re in 10-15 mph winds. I want to see what it can do. Come back in the future for an update.

Overall, I was very impressed. The Obex handled everything I gave it. After nearly every throw, I’d pause and find myself a little taken back by how it flew. The glide is unexpected and it feels great in the hand. I’m anxious to get back out there with the Obex. I would also want to throw an X-Link Firm version too. The Firm’s beat in a little quicker but I think come out of the hand a little cleaner.

They are out in stores now. Check out Vibram’s Pinnacle retailers for where you can order them now.