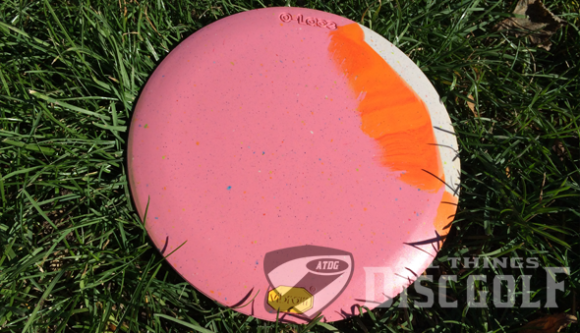 For the folks at Vibram Disc Golf, the O-Lace has certainly been a journey with many unexpected twists and turns. Earlier this year the first prototypes of the overstable distance driver hit local disc golf courses. Some loved the initial prototype, some thought it was actually too overstable. After many hours of testing and paragraphs of feedback, Vibram decided they needed to retool the O-Lace. For now, they didn’t want a disc that overstable. They needed to bring it back a little bit. Well, the retooling went a little too far and they created a disc that was too similar to its Lace cousin. After another batch of retooling, Vibram has created quite a nice disc that seems to be exactly what they were looking for.

Vibram says this about the O-Lace:

Loving the reliability, speed, and distance of your Lace? Looking for something a bit more overstable for those forehand and overhead shots? Well look no further! We’re proud to introduce the newest member of our distance driver family, the O-Lace. This overstable compliment to the Lace is able to fully handle headwind and torque, making it a valuable addition to your bag.

Vibram sent us an O-Lace to test out and after a few days with their new driver, we were again impressed by this rubber filled flier. When we reviewed the unLace a few months ago, it was clearly not a disc for big power arms, or something you could throw into a headwind. The O-Lace on the other hand? Oh yes, this loves some power.

The first day we had with the O-Lace saw winds of about 15-20 miles per hour. While we tend to dislike really windy days when testing discs, it was perfect testing conditions for a wind-fighter like the O-Lace. Our very first throws were done into a straight headwind or one with some slight left to right movement. As long as you keep the nose down, the O-Lace will fight it beautifully and maintain the intended flight path.

When thrown into a strong headwind with a flat release the O-Lace would flip just a little bit, but it was never a big movement left to right. If we gave it some hyzer it would flip to flat and glide straight down the fairway. Even with that slight amount of turn, the O-Lace is very stable at high speeds. It is clearly not afraid of headwind.

We turned things around so we weren’t facing a headwind and spent some time in a second session in much calmer conditions to really see what the O-Lace would do when it wouldn’t have to fight a wind. We again saw a very stable flight at high speeds. It would really hold the line and angle you put it on. If you have a really strong arm, you might be able to get a little bit of turn without the help from a headwind. We always felt in control of the disc. We never saw a flight path that surprised us. It was very predictable.

When testing just how stable it was, we wanted to throw the O-Lace on a tight forced anhyzer line to create that s-turn everyone looks for. Even when thrown with a little off-axis-torque, the O-Lace would fight out of it and fly in a very tight curve before fading out. On big sweeping anhyzers the O-Lace would break out pretty early. We found our best results when kept low and on a straight line.

The fade on the O-Lace is strong enough to fight a decent wind, yet weak enough to keep some control in your shot. Will it head to the left? Yes, of course it will. Will it dive too hard to where you lose control? No, it won’t. To us, it was the ideal amount of fade we look for in a stable-to-overstable distance driver. The O-Lace’s fade also had more forward penetration than expected.

The last thing that stood out on the O-Lace was the glide. The glide is very similar to the Lace. The added glide helped keep the O-Lace aloft and helped the fade from heading too far left. Distances with the O-Lace were certainly along the same lines of other distance drivers in the same category.

Overall, we’d give the Vibram O-Lace ratings of 13, 5, -0.5 to -1, 3 to 3.5. It is a very high speed driver with above average glide. It comes out of the hand very smooth and will carry down the fairway with ease. The amount of turn will depend on your arm strength, but be ready for a pretty stable flight that can hold up to a headwind. At the end of the flight the fade is strong enough to do some wind fighting, but very controllable.