One of the perks of being a touring professional disc golfer is the travel. Beyond the coast to coast travel in the United States, there are often trips to Europe for major tournaments. Occasionally a new opportunity arrises and for Valarie Jenkins and Nate Doss, it was a chance they couldn’t pass up.

The duo spent a week in Russia teaching locals disc golf thanks to a partnership with the Professional Disc Golf Association, the Bureau of Education and Cultural Affairs and grants supported by the U.S. State Department and their SportsUnited Program. This was also a part of the “Empowering Women and Girls Through Sport” initiative ran through the University of Tennessee. With the coordination by Embassy Moscow and Consulate General Yekaterinburg (Omsk), Jenkins and Doss were representing their country while tasked with teaching disc golf to people in Russia.

They covered their journey on their blog, On Tour Disc Golf, and we talked with Jenkins after they returned to the United States to find out how their trip went.

When did going to Russia first become a possibility and what was it like when you got the call that it was going to become a reality?

“The first email we got came from Brian Graham of the PDGA, while we were playing the Memorial asking if we would be interested in teaching disc golf in Russia. I had just finished my round that day, when Nate told me the amazing news, and immediately we were on board. They support these sports diplomacy programs to bring countries and cultures together through sport, and we would be the first disc golf envoys to be a part of this type of program. It, of course, was a bit scary with our current political state with the country, but the opportunity to join forces with the U.S. State Department and do an international trip to promote disc golf was something we couldn’t pass up.”

What were you two tasked with for this trip? Everything revolved around disc golf, correct?

“The mission was to teach disc golf to brand new players, children, and coaches, and promote the inclusiveness of the sport for all people no matter of physical or developmental challenge, gender, or age. Nate’s flight was purchased by the State Department, and mine was sponsored through the University of Tennessee’s grant called Empowering Women and Girls through Sports.” 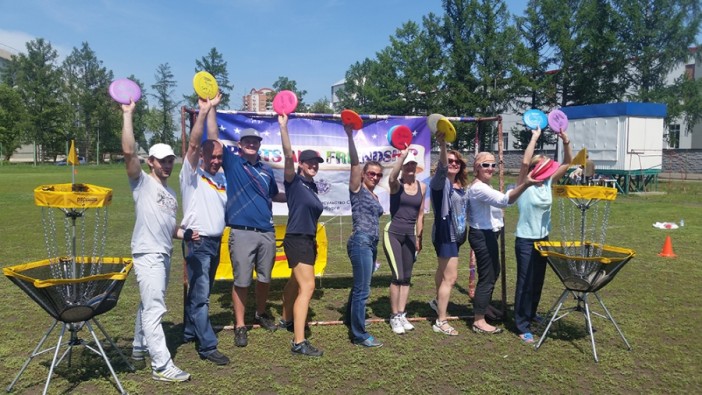 Valarie Jenkins and Nate Doss with a group in Omsk. (Photo: On Tour Disc Golf)

How did the local communities take to learning disc golf? Were they anxious to get started or hesitant?

“Everyone we introduced the sport to loved it! It was such a positive response for all the different groups of people we met. We focused on the basics and played games to help learn the skills, and then set up the baskets to play a course wherever we could. It was different for every group we taught, by we altered our teaching to fit their needs or wants. With teachers and adults we were more detailed, but backed off so they could learn on their own as well. With kids, it was all about the games and keeping the energy and enthusiasm high. If I ever saw a kid sitting on the sidelines, I would hand them a disc and they would be up and playing with the rest of them and a couple of times they’d be the last one playing.”

You made many stops on your week long trip. Which one was your favorite and why?

“We were only in 2 cities, Moscow for 2.5 days, and then Omsk for 4.5 days. Moscow was a beautiful to see but for disc golf and teaching we did so much more in Omsk. We loved teaching the kids and seeing their excitement with every made putt. Each clinic we taught was so successful in its own way, and while it was a lot of work, it was so worth it!”

Did you two have the chance to experience anything non-disc golf related on your trip? Get to explore the cities at all?

“Yeah! We did a walking tour around Moscow before we took a midnight flight to Omsk. It was really cool to sightsee around a town so old and full of history. You can see pictures on our blog of our tour. We then did a walking tour around historical area of Omsk the day we arrived. We tried the local foods every chance we could, and within the short week we got a great experience in Russia.”

Is there a chance you’ll have an opportunity like this either in Russia or another country again in the future?

“I hope so. The U.S. embassy and the consulate expressed their gratitude for our enthusiasm through a hectic schedule and were impressed by our sport and its inclusive characteristics. It sounds like the U.S. consulate will be involving disc golf in their summer camp this year because of this trip.”

“This trip all happened because of one women named Marina. She had worked with the consulate and knows how these programs work. She saw disc golf as a great opportunity to introduce to Russia and the kids she worked with in her Non-profit organization.”

“We created a great relationship with all involved with the SportsUnited group and hopefully we can set up trips to involve the U.S. Embassies of other countries we visit in the future.”

After this experience, what is your biggest takeaway from the trip?

“We taught disc golf at two orphanages, and it was so inspiring and heartwarming. The kids were so receptive to the game and their energy was contagious. After leaving the first home and heading to the next, Nate and I decided we wanted to do more events like this to visit children’s homes in the U.S.. All the things we love about the game makes it so accessible to all groups of kids, and no matter their ability they can enjoy playing the game. Hopefully, we can organize this and make it happen in the coming year or so.”

Thanks to Jenkins for talking with us during their already busy schedule. Check out their blog for more details from their trip and follow them on Facebook!