Along with releasing their new Rebel bag, we were graced with the release of a new version of the Upper Park Designs Shift disc golf backpack. The Shift was first released in late 2012 and was a successful effort, but there was clearly some room to improve. After receiving feedback from users Upper Park has made various improvements to the Shift and the adjustments have produced a formidable option in the disc golf backpack world.

Upper Park was able to sum up the changes made to the latest version of the Shift:

Already hailed as the most comfortable backpack in disc golf, the Shift is still compact, comfortable, and versatile as ever. The four external pockets have been upgraded to high-grade stretch mesh, allowing the perfect fit for your discs. The internal vertical pockets have been rebuilt to present your discs in a more beautiful, and accessible way, while still allowing enough room inside for accessories. We have added our innovative Quick-draw mini disc pocket to the top and a reinforced Hypalon base with 3 studded feet for extra protection. And yes, the Shift stands like a champ.

Upper Park sent us the latest version of the Shift to check out and we’ve spent some time with it on the local courses to see how their mid-sized backpack stands up. With that said, let’s start with how it actually stands. The previous version of the Shift, which we’ve very briefly used in the past, had a hard time remaining upright. It lacked the stability needed to really stand up, especially on uneven ground. Happily, we can say that the new Shift really stands well. As we used it, we almost found it surprisingly sturdy. The bag almost leans away from itself (that is, toward the side that faces away from you when on your back). You naturally want to set it down with the back very vertical, but then you find it wants to lean ever so slightly.

Disc storage is a little unique on the Shift with the main compartment being home to three vertical slots for discs along with two pockets on each side to hold another set of discs. As with the Rebel we used the top vertical pocket as our putter pocket. We were able to easily fit three putters in that slot. It was always easy in and easy out. We then fit two midranges in both of the other vertical pockets. Discs seemed to come in and out a little easier in the Shift than the Rebel. Unlike the Rebel, we were easily able to use all three vertical slots. If you moved drivers to these pockets instead of midranges you might be able to squeeze in a few more. 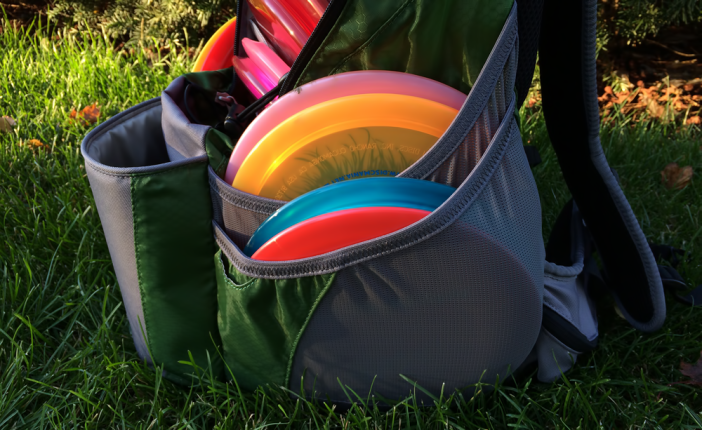 The side pockets on the new Shift are dramatically improved. The stretchy mesh material was strong enough to keep things snug, but still provided enough movement to allow the discs to be removed with ease. We also had little problem, especially with drivers, putting the discs back into the pockets.

Overall, we had 15 discs in the bag and could have easily fit another 3-4 in the bottom of the bag, or swapped out some midranges for drivers which would have opened up some options for us.

The Shift isn’t meant to be the catch-all-style disc golf backpack. It can certainly hold some of those extra items, but disc storage is really what the Shift is built to do. We said the main compartment was nearly the only storage because there are two small zippered pockets on the extreme sides of the bag that are attached to the bottom of the shoulder straps. These small pockets will actually hug you slightly when you wear the bag. We stuck our cell phone and keys in there, but they can easily hold any moderately small item you might need. It’s a unique solution to the small amount of overall storage when compared to other bags.

The back of the Shift is very padded. With one pad across the lower back and two on each side, you get a lot of protection. The bag really does rest off of your back instead of being pushed all the way against you. With nicely padded shoulder straps, the combination really does lead to a comfortable ride. When you take into account of how the discs ride in the vertical storage and side pockets, the weight of the bag is very evenly distributed and gives the Shift a much lighter feel than other bags. When empty, it certainly is light, and doesn’t feel that much heavier when loaded up.

The Shift stands at a nice height. It isn’t as tall as the Rebel, but you aren’t needing to lean over very far to reach the discs, especially those in the top vertical pocket.

Finally, the Shift has one giant insulated cup holder on the front of the bag which could double as towel storage if you aren’t in need of something to quench your thirst. The mini pocket that rests on the top of the bag, under the handle, and between the shoulder straps is the same as the Shift’s and provides a nice alternative for mini storage.

At the time of this publishing, the Shift is on sale for $129.99 and is a nice option for bag that can easily hold 15-20 discs depending on the types of discs and the layout you’re seeking. With the weight of the bag distributed evenly and the heavily padded back, the Shift can be very comfortable, especially after a long round on the course. You don’t have to worry about discs bouncing around or the bag falling over due to the improvements Upper Park made on the Shift.

The Shift might not look like other disc golf backpacks on the market, but don’t let that scare you away from it. It doesn’t look like anything else out there, because there isn’t anything out there like the Shift. It does things in its own way and it does them very well.