Have you ever gone to buy a disc and seen some numbers on it and had no clue what they mean? Maybe you were at Wal Mart or your local sporting goods store where asking an employee wouldn’t have been of any help. Well, those numbers are the disc’s flight ratings. I’ve been golfing for the past 8 years, and working in a disc golf pro shop since March of last year. One big thing I have learned is that many people are confused by the flight numbers given to almost every disc on the market.

I’ve had countless people ask for more information and a proper explanation of the numbers. What do they mean? Why are they different? How come they don’t look the same? Well, not all disc manufacturers use the same system of rating discs. I will explain three of the most common systems. They are the 4 number system, the Vibram system, and the Discraft system.

The four number rating system is the most commonly used rating system by disc manufacturers. Despite frequently being referred to as The Innova System, many other companies (Latitude 64, Dynamic Discs, Westside, Legacy, etc.) use the same system. Being used by so many different brands provides some great benefits, but also has its drawbacks. One of the main benefits of so many companies using the same system means a lot of people recognize the numbers. One of the biggest drawbacks is that not many people fully understand them. It is also worth noting that while many companies use this four number system, comparing one company’s discs to another company’s disc isn’t always compatible.

So let’s break the system down. There are 4 ratings assigned to each disc: Speed, Glide, Turn, and Fade.

The speed rating has the widest range of numbers, from 1 to 13. It is the most important rating because the following three ratings are dependent on it. Also, speed is the most commonly misunderstood rating. A lot of golfers, especially people new to the sport, hear the term speed and just assume that is the speed the disc flies. While that makes sense and is perfectly logical, it’s actually incorrect. The speed number is actually the minimum speed at which you have to throw the disc in order for it to fly like it was designed. The higher the number, the faster you have to throw the disc. The speed rating is also what tells you if the disc is a putter, mid range, or driver. Putters fall in the 1-3 speed range, where mid ranges are rated as either a 4 or a 5. Drivers are actually split into two categories. You have fairway drivers from speed 6-8, and distance drivers are 9-13. As previously stated, the 3 other ratings are based off the speed; meaning, if you can’t get the disc to the rated speed it will not fly like the ratings indicate. The disc will fly more overstable. The turn and fade are what dictate the stability of the disc, but we’ll get into that later.

We should also mention that some companies have added the Speed 14 rating. There are discs with a speed 14 rating from one company that have the same wing width as one from another that has a speed 13 rating. There is no doubt that marketing comes into play here as well. Along with looking at the speed number, it is worth looking at the true width of the rim to see how things compare between companies.

Glide is probably the least impactful, and easiest to understand, of the 4 ratings. Glide is rated from 1 to 7, but the vast majority of discs will fall in the 4-6 range. The glide rating is the easiest to understand because it’s exactly as it sounds; the amount of float the disc has in the air. The higher the number, the more glide it has.

The third rating is the turn rating, sometimes referred to as High Speed Stability (HSS). Turn is the amount of curve the disc has immediately after leaving your hand. HSS is dependent on how you throw the disc, whether it be backhand (BH), forehand (FH), left handed (LH), or right handed (RH). For a RHBH/LHFH throw the turn will curve to the right. For a RHFH/LHBH it will curve to the left. HSS is rated from +1 down to -5, but most discs fall between 0 and -3. This is where you get into whether a disc is overstable, stable, or understable. Generally speaking, a +1 means it will immediately start turning left (overstable), a rating of 0 means it won’t turn either direction and will go straight (stable), and a negative number means it will start turning to the right (understable). The more negative the number the more it will turn over. So a disc with a turn rating of -3 will turn a lot more than a disc with a rating of -1. More understable discs are great for beginners. Where an experienced golfer can get an understable disc to turn a lot, the new player, who can’t get the disc to the intended speed, can expect a much straighter flight.

The fourth and final rating is the fade, or Low Speed Stability (LSS). Similar to the HSS, the direction of the LSS is dictated by the way you throw the disc. The fade is how much the disc will come back at the end of its flight. The turn starts right after the disc has been thrown and is curving in one direction. As the disc slows towards the end of its flight the fade begins to kicks in. This is when the disc starts to curve back in the opposite direction of the original turn. The numbers for the fade rating range from 0-6. Zero means that the disc will settle down in a straight path. The higher the number the more severely the disc will hook.

Take a disc with the ratings 8, 4, -2, 3. This disc is going to be a fairway driver, with a fair amount of glide. With a turn rating of -2 and a fade of 3, (when thrown RHBH) that means this disc’s will have what is called an “S curve”. Meaning right after leaving your hand the disc will start turning to the right. As the disc slows down the fade starts to become a factor and the disc will start coming back to the left. Since the fade rating is higher than the turn the disc should land just slightly to the left of where you threw it. 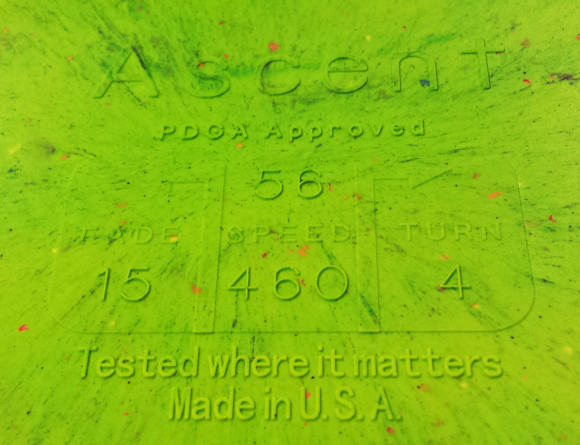 Vibram’s rating system is similar to the Innova system. It still has a speed, turn, and fade rating, but they’re not on the same scale. The Vibram speed rating is the minimum throw speed, in MPH, to get the desired flight out of the disc. The turn and fade ratings are given on a scale of 0-30. The rating given is the degree of flip you can expect from the disc in flight. A 0 rating means no turn, and a 30 rating will have the sharpest turn. One new feature unique to the Vibram discs is an image of the flight path that can be expected when thrown at the proper speed actually engraved into the underside of the disc.

For an even better understanding, lets make up a driver (Disc #1) with a speed rating of 60mph, a turn of -1, and a fade of +25. Disc #1 is going to be very overstable. Now if there was a different driver (Disc #2) with ratings of 55mph, turn of -5, and fade of +8, that would be a much straighter flying disc. Even though Disc #2 has a slower throw speed, as a result of it being considerably less overstable it would still fly further than Disc #1.

Discraft is one of the few companies that use their own unique style of rating discs. Discraft uses a single number based on where the disc lands after completing its flight. Discraft’s rating system gives a number from -3 to +3. The best way to explain this system is to think back to the 4 number system. If you add the last 2 numbers from the 4 number system (Turn and Fade) together you will approximate the number in the Discraft system. For example, a disc in the Innova system that has a turn of -3 and a fade of 2 would be around a -1 rating on the Discraft scale. It’s not a perfect ratio, but because so many people already have knowledge of the Innova system it’s the easiest way to understand it.

When I first started disc golfing I had 2 drivers: an Innova Sidewinder (4 number ratings: 9, 5, -3, 1), and when it was released, a Discraft Nuke (Discraft rating: 1.6). For distance I found myself throwing the slower, understable Sidewinder much more often than the faster, overstable Nuke. This was because the Sidewinder would fly nice and straight, where the Nuke would hook hard to the left every time. Due to the Sidewinder’s understable nature it flew very straight, even though I didn’t have the proper arm speed to throw it like it was designed. My initial difficulties with the Nuke were a result of it being designed as a slightly overstable disc, and with me not having the proper arm speed, its overstability was increased. At work, when I’m helping new players select discs I always point them towards slower, stable to understable discs. If they have their heart set on a driver as well it’s best to go with an understable fairway driver, or slower speed distance driver that will have a nice straight flight, even if they can’t throw it fast enough yet.

Most importantly, use the flight rating systems as a way to compare one disc to another for the way you throw it. Say you find that a disc with a -1 for turn on Innova’s scale still flies very straight for you and doesn’t turn at all. A disc with a -2 should show more turn for your arm in comparison to the first disc. The more you can use the systems to figure out how each disc performs for you, the more you’ll be able to get a better idea of what to expect when you pick up a new disc. Just because the disc says it will turn or show minimal fade, doesn’t mean that might translate 100% to you and your style of play. Take it as a benchmark and you’ll be good to go!