You are at:Home»Reviews»Other»UDisc continues to be top disc golf mobile app

For any disc golfer who is also a smartphone user, the search for a reliable disc golf app to serve as not only a scorecard, but an all around disc golf tool. UDisc currently sits atop the list of not only featured packed disc golf apps, but it’s one of the most useful too.

As with many mobile apps, more features does not always translate to a better user experience. UDisc developer, Matt Krueger, has slowly added features to UDisc when the feature was ready. Now on version 5.0, UDisc has nearly everything a disc golfer could ask for. Even with that said, Krueger is continuing to develop new features for his app. 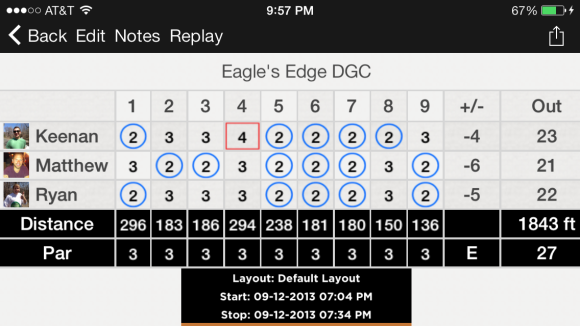 UDisc goes beyond just the normal scorecard functionality, which it does really well, and adds in features like a fully detailed statistics and a tool to measure your shot using GPS. The more you use UDisc the more valuable and useful it becomes. Instead of carrying multiple apps, UDisc can really serve just about any need you’ll have on the disc golf course.

UDisc is one of the few disc golf apps that is available for both iOS and Android. iOS has reached version 5.0 with the Android release just around the corner. To get the story on how UDisc came to be and what features are around the corner, we talked with UDisc developer Matt Krueger.

All Things Disc Golf: Why did you decide to develop UDisc?

Matt Krueger: I live in the Minneapolis/St. Paul area where there are ~60 courses within a 30 mile radius. In 2009, my friends and I made it our goal to play 1 or 2 new courses every weekend for the entire summer to try to play all 60 courses in the area. Inevitably we would finish playing a new course in an unfamiliar part of the city and want to hit another course while we were there. I kept thinking about how much easier it would be to find new courses if there was an app that would plot all the courses close to your current location on a map, in a smartphone-friendly format.

Being unhappy with the website based solutions available at the time, I decided to learn Android and make the initial Android-only version of UDisc. Its sole feature was to display courses on a Google Map and get you directions to them from your current location. I didn’t actually own an Android phone at the time, so I decided to learn iOS and make another version that would work on my iPhone.

The positive response from the disc golf community was astounding and has motivated me to keep adding new features ever since. 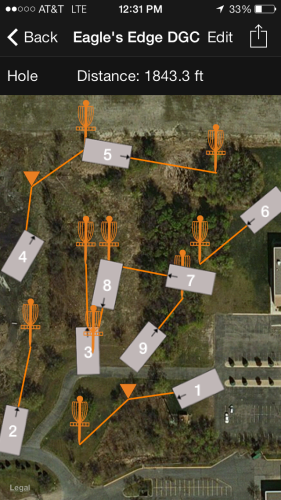 All Things Disc Golf: You recently launched version 5.0 of UDisc. What is new in this version?

Matt Krueger: v5.0 was the largest release to date. There were several major features:

All Things Disc Golf: UDisc is very featured packed. Do you have other features planned that haven’t made the cut yet?

Matt Krueger: Absolutely. I have a list of ideas that is several pages long and I have no plans to stop anytime soon. I prioritize what I work on based on the frequency a specific feature gets requested by users.

Personally, I think this is UDisc’s biggest strength. I encourage and appreciate constructive feedback. The features I add are always based on user requests, so let me know what you want to see in future versions.

All Things Disc Golf: Is it hard keeping the Android and iOS versions equal?

Matt Krueger: I’m sure it’s apparent that I have focused more time on the iOS version so far, but that is about to change! I’m actually much more comfortable developing for Android.

I am focusing exclusively on making Android equivalent to iOS over the winter. I will release a new Android version in December 2013 with support for multiple layouts per course, followed by another release this winter with course maps. I’ll also be redesigning the UI to look like the current iOS version and adding pictures and more info for Saved Discs just like the iOS version.

Android and iOS will be functionally equivalent by the end of the winter.

All Things Disc Golf: What is your favorite feature right now?

Matt Krueger: The feature I use the most is the scorecard, but my favorite feature is definitely the course map creator/viewer. 3 months of work went into making that feature and I love mapping new courses.

Once a course has a map you can see your distance to the pin on a map based on your current GPS location (which was very fun to test), and hole distances are included on the scorecard. Maps are also incredibly helpful for navigating a new course that has poor signage or for finding the first tee.

All Things Disc Golf: How do you ensure your app continues to evolve while not making it very bloated?

Matt Krueger: I’ve designed UDisc in such a way that it is highly extensible and easy to update and improve. I’m a Software Engineer by profession, so I’m able to leverage my experience developing high quality software for industry to ensure UDisc is built on a strong foundation and will never get bloated.

All Things Disc Golf: Since you have launched version 5.0, what kind of feedback have you received from users?

Matt Krueger: The feedback has been overwhelmingly positive. In the first 3 weeks the course map creator was available to the public, ~10% of all the courses in the US (and several in Canada/EU) were mapped, which blows my mind.

Also, multiple layouts per course was the most frequently requested feature since I first created the scorecard over a year ago. There were a lot of people excited to finally be able to separate statistics based on different course configurations in v5.0, as well as submit new layouts for inclusion within the app.

All Things Disc Golf: What’s next for UDisc? Do you have other apps in development?

For Android i’m adding multiple course layouts, course maps, a new UI and everything else iOS has that Android doesn’t yet. By spring 2014, Android will be the same as iOS.

As far as other apps, I just finished making version 1.0 of the Joe’s Universal Flight Chart iOS app for Gotta Go Gotta Throw. Gotta Go Gotta Throw is a large disc golf equipment supplier based in the Twin Cities. The Joe’s Universal Flight Chart app allows you to sort and compare discs from all major manufacturers on a uniform rating scale (so you don’t have to convert from one brand’s rating system to another) and purchase discs directly within the app. It will be available in the AppStore before Black Friday, and it’s free!

All Things Disc Golf: Is there anything else you want to cover?

Matt Krueger: UDisc’s popularity and success is completely due to its amazing user base. The volume of course maps, new courses, course information and other feedback everyone has contributed is a testament to how awesome the disc golf community is. User submitted content is added to UDisc within 24 hours of submission (usually much faster), so keep creating maps, submitting course data, and rating your local courses and I will keep delivering high quality software that gets out of your way and lets you focus on your game.

Krueger has been great with his communication during this entire process. It is clear that he values feedback on UDisc. If you are a UDisc user, never hesitate to reach out to Krueger with comments, suggestions, and overall feedback. Your opinion will help make UDisc and even better app as time goes on.

Check out UDisc online, on Facebook, and Twitter for the latest news. You can find UDisc in the iOS App Store and Google Play Store.