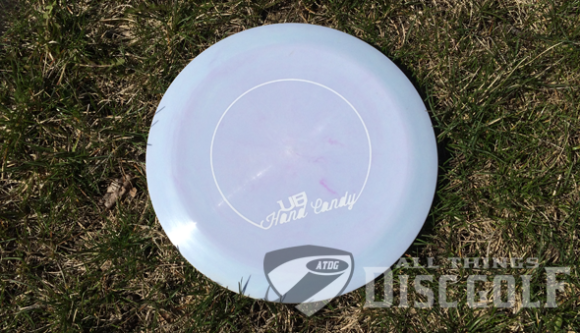 After releasing the the Procul this past fall, UB Disc Golf has released their second driver: the UB Disc golf Monstrum. This high speed driver is no joke and can take just about anything you can throw at it. The Monstrum certainly is stable, but it is a monster you can handle.

UB Disc Golf says this about the Monstrum:

If the Procul didn’t have enough stability for you, the Monstrum has plenty. While it isn’t stupid over-stable, it will hold up to the test of big powerful rips and long gentle hyzer lines with a dependable fade at the end. Lower arm speeds will find this disc to be quite beefy, while big arms will find it to be straight with a strong fade at the end. If you are needing a stable driver, the Monstrum could easily find a way into your bag.

UB sent us a Monstrum to test and the first thing you’ll notice about the Monstrum is the shape. Our Monstrum (in the Creamy plastic) has a very flat top. After a slightly slanted shoulder, it will level off quickly and is board flat on the very top. This almost creates a natural position for your thumb on the top of the disc and is very easy to dig into. The depth of the rim is right in the middle of the road too. It isn’t too deep and it isn’t too shallow.

The Monstrum slots in around the Speed 12 category. The flat top helps keep the feel on the smaller side, but there is no doubt this is a distance driver. While the flat top does bring a nice feel, it also takes away some of the glide. The Monstrum will rely on its speed and your arm strength to get down the fairway. Don’t expect it to really glide on down and carry for that extra distance.

In terms of stability, the Monstrum is quite stable, but even someone with 350 foot power can get a little turn out of it. If you have less power than that, don’t expect much turn. This is a disc where you can reach back and go for straight line distance and trust it will fly straight. The stronger arms in our testing group loved being able really crush into it and trust it won’t turn over. If you have a headwind, you should have no problem throwing the Monstrum into it and seeing predictable results.

The Monstrum’s fade isn’t the strongest out there, but it will finish left. The fade was akin to an Innova Destroyer. It heads left, it will skip, but it doesn’t knife that hard. It didn’t take very long to figure out just what kind of fade the Monstrum had and it was very consistent from throw to throw.

After all is said and done, the Monstrum will appeal to disc golfers with arms on the stronger side of things. If you don’t have a very strong arm, the Monstrum can actually be a good learning tool. It forces you to have good form and throw the disc well in order to see great results.

The high speed stability and lack of glide means you need to do a lot of the work yourself. If you need straight line stable distance though, the Monstrum can do it and it can do it well. Once the strongest arms on our testing team learned they could really push this disc, they were really enjoying it.

Sometimes you just need a disc that you can trust that won’t turn over, will fly far, and do it with control. The UB Disc Golf Monstrum is that disc.