For many disc golfers, when looking for a putter, you’re often looking at one of a few things (or all of them). You want a putter that can be reliable in the circle, plastic that provides great grip, yet adds in some durability, and finally a putter that can perform off the tee and be used as a driver. The UB Disc Golf Lex is UB’s first foray into the world of disc golf putters and it aims to accomplish nearly all of those needs.

UB says this about their first putter:

The Lex has a larger diameter then most putters allowing it to have a max weight of 177.6. The larger diameter gives some extra distance and glide when throwing it. The depth and rim shape makes for a great feeling disc in the hand. When thrown with decent force, the disc should hold its line with a predictable fade at the end.

UB handed us the Lex to try out at a local tournament and we’ve spent some time with it in and out of the circle to see if the Lex lives up to the hype we’ve seen already about the Lex.

For those who like a board flat putter, the Lex will check that box for you. The very top of the Lex is as flat as you can get without getting concave. The outer rim has a small rounded shoulder before a blunt nose that creates a nice feel in the hand. It certainly isn’t as large as the Latitude 64 Dagger, but falls closer to the Innova Aviar in terms of shape. The Lex is a beadless putter with a bottom edge that is a little sharper than other beadless putters. In UB’s Chewy plastic, there are a few places where it has beaten in more than others and it has smoothed out and has become a little more rounded.

As with most of our putter reviews, we like to focus on how it performs as a driver instead of a putter since each of us have our own styles of putting and everything is subjective.

When thrown at full power, the Lex as quite stable at high speeds, but had a nice soft finish. The Lex was very straight and able to really hold its initial line with ease. There are a few signature holes at local courses that call for a simple, straight putter drive. We could really put some power behind the Lex, throw it straight and trust it to hit the line. There wasn’t any turn and it didn’t want to fade early either. This stability really shined on approach shots as well.

We could really control the Lex quite a bit. While it can certainly fly on a nice straight line, it also was able to fly on some nice little hyzer lines. Since it didn’t want to flip up much at all, it could really hold a sweeping line and finish with a predictable fade. Since it has a nice amount of glide and not a very strong fade, it can also hold a small anhyzer line too. It isn’t the most understable putter by any means, but can certainly hold a big anhyzer if your force it.

Will the Lex fade? Yes. Will it fade hard? No. It has enough fade to certainly move it past center, but it isn’t much more than that. Its the type of fade you want in a putter like this. You know it won’t want to dive out on you, but you can trust that it will have a little finish to it. It helps the Lex become a very predictable and trustworthy putter.

Finally, we want to touch on UB’s Chewy plastic that is featured in the Lex. The blend that we’ve been using has a soft and tacky feel to it, but the disc itself is relatively firm. We were able to feel some other blends of Chewy plastic that were quite firm, but still had this tacky feel. It’s a little chalky and does have a lot of grip. If you are used to other base plastics, it would be very easy to transition to the Lex and UB’s Chewy plastic. 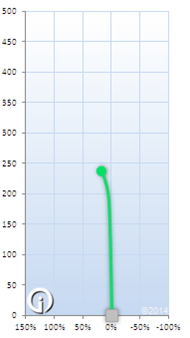 Overall, we’d rate the UB Disc Golf Lex at 2, 3, 0, 1. You’ll get a nice stable flight at high speeds, a touch of turn, and enough glide to make it a nice putter off the tee or on an approach to the basket.

The flight chart from inbounds Disc Golf shows a flight virtually identical to what we were seeing. Nice and straight with just a hint of a finish. Again, there is not much to dislike.

For their first step into making putters, UB Disc Golf came out with a solid effort in the Lex. You get a very comfortable feel in a plastic blend that has a lot of grip. The flight is stable enough to give you a lot of confidence off the tee and as a thrower. You can lean into it and let the Lex do the work. The Lex won’t skip away on you or finish too hard, but it is reliable.

If you take it inside the circle the Lex will also perform as desired and allow you to putt with confidence. The plastic provides the grip you desire and the neutral flight allows you to aim right at the heart of the chains. Push putters or spin putters should find something to like in the Lex.