You are at:Home»Instruction»How to throw sidearm: a breakdown of the basics

Editors note: Sarah Hokom is a guest co-author for this post.

The disc golf throwing technique that goes by the names ‘sidearm’, ‘forehand’, ‘flick’ and ‘two-finger’ is the primary (or only) driving method for some players, a useful tool for others, and an enigma for many. Personally I fall into the second group, and before that spent many years with zero confidence in my sidearm shot. Sarah Hokom, on the other hand, is the poster child for the forehand throw, so between us we should be able to speak to the perspective of pretty much everyone who wants to add this shot to her or his arsenal.

We’ll start with Sarah’s detailed breakdown of all the components of proper sidearm technique, followed by some great miscellaneous tips she throws in as afterthoughts. I’ll then add a few of the ‘aha’ moments I recall having when my forehand finally began to improve. 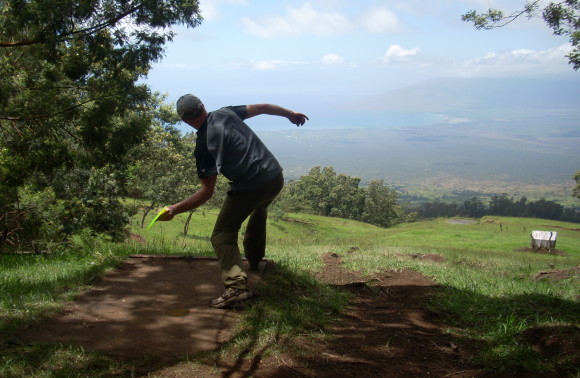 Note how this player’s torso is bent to match the angle of the disc, yet twisted forward so he is facing his target. (Photo by Jack Trageser)

Sidearm grip according to Sarah

The (left-handed) forehand grip from underneath. Note the side of the middle finger pressed against the rim.

Place your palm up and make a “gun” with your middle finger, pointer finger and thumb.  Tuck the disc into the space between the pointer and thumb (pointer/middle on bottom, thumb on top).  Feel the inner rim on the underside of the disc with the side of your middle finger. Secure your grip with your thumb on the top of the disc, near where your pointer finger knuckle is on the underside.  The other two fingers can simply rest on the edge of the disc or be tucked underneath- whichever feels more natural.  The grip should be firm but wrist should be flexible in order to create the “whip” during your stroke. 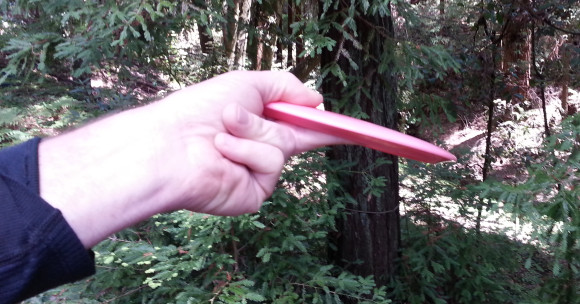 The (left-handed) forehand grip from the side angle. 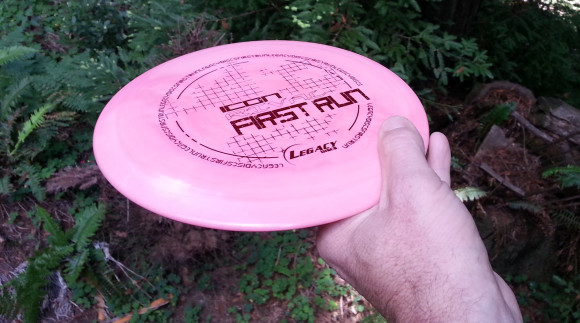 Top view of the (left-handed) forehand grip. Note the position of the thumb on top and the fact that the grip is on the leading edge of the disc- NOT the side.

For a right handed player, line up the left side of your body with your intended trajectory (you will be standing sideways on the tee with the right side of your body closest to the back of the tee).  Take a step with your left to initiate the footwork, then replace the left foot with the right foot in a low sliding motion, exploding forward off the right foot onto the left foot, rotating your hips forward to face your target as you throw the shot.  Finish the shot by releasing your right foot during your follow through.  If possible, get low during the release point to maximize the use of your lower muscle groups and create added power. 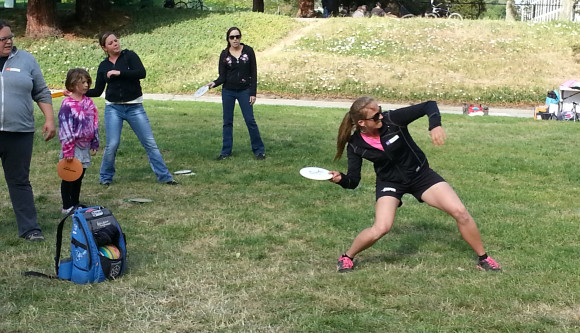 Arm Motion/Hips according to Sarah

Grab the disc with a sidearm grip and cock your wrist back as far as possible.  Reach your arm back with the disc slightly wing-down and your forearm as flat as possible. Bring your arm through in a straight line with the disc flat in a whip-like fashion slightly leading with your elbow. As your arm comes through, your hips should rotate to face your target. It’s very important that your elbow be tucked close to your body in the middle of your stroke to avoid injury, but as you release the elbow should extend and arm should follow through toward your target.  Finish the shot by pointing your throwing hand at your target.

After years of having a forehand shot that I used only in situations where there was absolutely no other option – due to my lack of confidence in it – I finally asked my friend Alan for advice. Like most other former Ultimate players he has a refined and accurate sidearm. Two of the things he pointed out immediately resonated with me, and when put into action produced instant results. They are the reason I don’t hesitate to throw sidearm when makes the most sense and even off the tee occasionally, so hopefully they help readers who have the same chronic flaws I had.

First of all, my friend Alan reminded me of how much harder it is to get a smooth, clean release (as opposed to wobbly) compared to the backhand shot. This is a problem as a wobbly disc is more likely to turn over, especially into a headwind when the wind will magnify the effect. Also, we have a natural tendency to turn the wrist over after release rather than keeping the palm facing up. This is especially true of those who have played baseball or softball. Due to both these factors a common flaw is to turn the disc over too much and/or too soon. 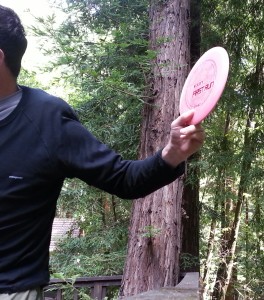 Avoid the common flaw shown in this photo. DON’T curl the disc upward when reaching back before the throw. Instead, reach back straight on the exact line and angle on which you want the disc to fly.

The most important correction to minimize this problem is to focus on keeping the palm facing upward upon release of the disc rather than rolling it over (rotating counter-clockwise for a right-handed player). I find that tilting both my torso and head inward (see photos above) helps to reinforce this as I am trying to keep the disc on the same angle.

And speaking of angle, I will often do two things to compensate for the increased likelihood of the disc turning over: First, I still throw a more overstable disc than I would for the same shot thrown backhand (although for expert sidearm throwers this may not be necessary); and second, I will increase the hyzer angle. These are both crutches that can be reduced or removed as technique and form improves. As Sarah notes above you’ll find yourself continually fine-tuning, which is a sign of progress.

The other major flaw my friend helped me correct is something common to many players, and is likely the biggest reason for a wobbly vs. clean release. When I pulled the disc back I would curl it to the point where the edge of the disc was perpendicular (opposite of parallel) to the ground and the line on which I wanted to ultimately throw. The problem with that habit is that it is very difficult to get the disc back on the correct line in the short burst required for a sidearm throw. The result is a loss of power, loss of aim and accuracy, and that wobbly flight.

To correct this I now focus on keeping the disc on the correct line and angle as I reach back, performing a couple slow practice strokes to reinforce the importance of this aspect of the throw. Also, by keeping my elbow tucked in close to my body (as Sarah instructs) the amount of reach-back I can get is limited- which is a good thing. It’s easier to keep the line and angle correct with a shorter reach-back, and since most of the power in generated from the snap, little if any distance is sacrificed.

There is one more thing I usually have to point out when giving lessons to those who struggle with the forehand shot. The hand should be holding the front edge of the disc, not the side of the disc closest to the body. This is important as it helps generate much-needed snap and spin. If the hand holds the side of the disc it will either come out with minimal spin, at a wildly incorrect trajectory, or both.

A big thanks to Sarah for sharing her tips with us. Be sure to check our her website at SarahHokom.com.