You are at:Home»Instruction»Three causes for taking extra strokes in disc golf—and how to avoid ’em (if possible)

After hole 7 the other day it occurred to me that I had already carded three bogeys. To loosely paraphrase Ice Cube from back in the 90’s, I was givin’ out strokes “like government cheese!”

Then, in keeping with my longstanding and hopefully constructive practice of pondering why the bogies occurred rather than simply lamenting the fact, I observed each was attributable to one of the three different reasons players take extra strokes in disc golf: bad execution, mental error, and bad luck. If you haven’t thought of your disc golf game from this perspective before, it might be worthwhile to check it out. Bad luck (and good luck!) will happen when it happens and luck is impossible to control (although often times ‘bad luck’ is set up by a bad decision). Errors are another thing entirely.

Knowing which type (execution or mental) you’re more prone to commit will help you know which area of your game requires more work in order to improve performance and consistency.

To make it clearer, here are the details of those three bogies at the start of my recent round, and some related thoughts:

On hole 1 my drive was thrown too low, resulting in it turning over and grinding to a halt. Cut down in its prime. It ended up well short of my normal landing area, which on uphill hole 1 at DeLa means a difficult par save- and sure enough, I took a bogey. The problem here was purely a lack of execution. I had a good, straightforward plan, didn’t vary from my routine, and didn’t have distracting thoughts floating through my brain. Quite simply, I overthrew in an effort to compensate for the cold weather, and in the process removed all the smoothness from my form. 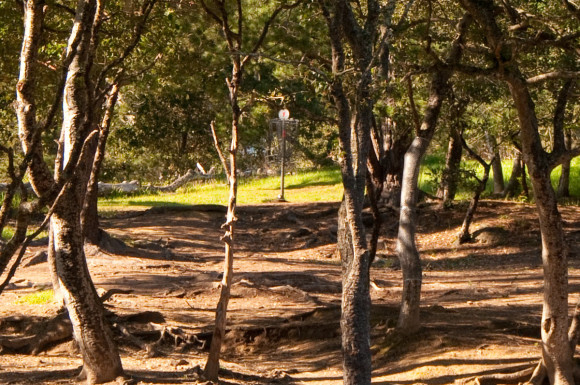 At DeLa, hole 4 requires the player to pass through trees. The course rules at DeLa also state that the two meter rule (a one-stroke penalty for discs stuck two meters or higher in a tree) is in effect. And due to the way the fairway dips down mid-way, any air shot is at least at some risk of getting snagged in some branches. Lower shots are less likely to get caught, but on that day my drive—which seemed rather perfect as it left my hand—ended up OB. The odds of that happening were quite small, but happen it did. Oh well.

Now the bogey on hole 7 was by far the most avoidable of the three. The mistake I made there was entirely mental, and those are the ones that bother me the most.

My drive had left me about 70 feet from the basket, with the slightly downhill angle of the shot making it play more like a 50-foot birdie try. But here is where I screwed up: A putt anywhere between 50 and 70 feet has a less than 50 percent chance of landing in the basket. Depending on the conditions (in this case a bit of a low ceiling near the cage) quite a bit less than 50 percent. That factor (the low probability of success) alone would not be a reason to lay up rather than go for it. But coupled with the reality that hole 7 at DeLa has a very fast, rutted fairway and a green that slopes down to the basket and far beyond, it makes birdie attempts quite risky.

Yet go for it I did, and the result was predictable. After a skip, rattle and roll, my comeback putt was around 40 feet . . . and I missed it. All I could think of was the fact that it took me three shots to hole out from 70 feet. Not acceptable.

Think about these three bogeys, and consider whether you identify with any one of the three in particular.

If you identify with Hole 1 (bad execution), you will likely see the quickest improvement through practice. Get out on a field, and get your reps in. Commit your good form and technique to muscle memory, so when it comes time for real play on the course, your body knows what to do.

If the bad break on hole 4 seems all too familiar to you, think long and hard about whether you’re really getting more than your share of bad luck or if it’s maybe the result of leaving too much to chance too often. I believe that luck evens out over time, so if you think you’re always getting the short end of the stick it’s likely because you’re not making the best decisions. At DeLa tournaments like the Masters Cup, out-of-town players often act frustrated at what they claim is the ‘fickle-factor’ connected to the course’s sloped terrain and fast greens. The players who score best in events there, however, know that these elements require special respect and adjust their games accordingly.

And that brings us to the stroke I took on hole 7. I knew the risks involved in going for that long putt with a fast, downhill green- the odds of making it didn’t match well with the odds of a miss resulting in a long comeback putt. But I went for it anyway, succumbing to whatever bad rationale happened to float through my mind at the time. Maybe it was impatience at being +2 after six holes, or maybe it was a type of bravado that led me to think nothing bad would happen if I ran the putt. But the odds played out, and what was most likely to happen did, in fact, occur.

If this type of mental error costs you the most strokes in your rounds, consider it good news. These are the easiest to eliminate as they have nothing to do with your ability to play the game. You just need to learn to get better at ‘thinking’ your way around the course. No one is perfect in this respect, but those that work at it get the most out of their abilities.

If you enjoy analyzing disc golf as much as playing it, it’s actually quite interesting to do a post-mortem on your mistakes. You’ll end up learning something nearly every time, and that means even your screw-ups can be productive in the long run.

So which of the three do you identify with the most, and more importantly, whatcha gonna do about it?