You are at:Home»Interviews»Third place finish pleases Doss in Minnesota 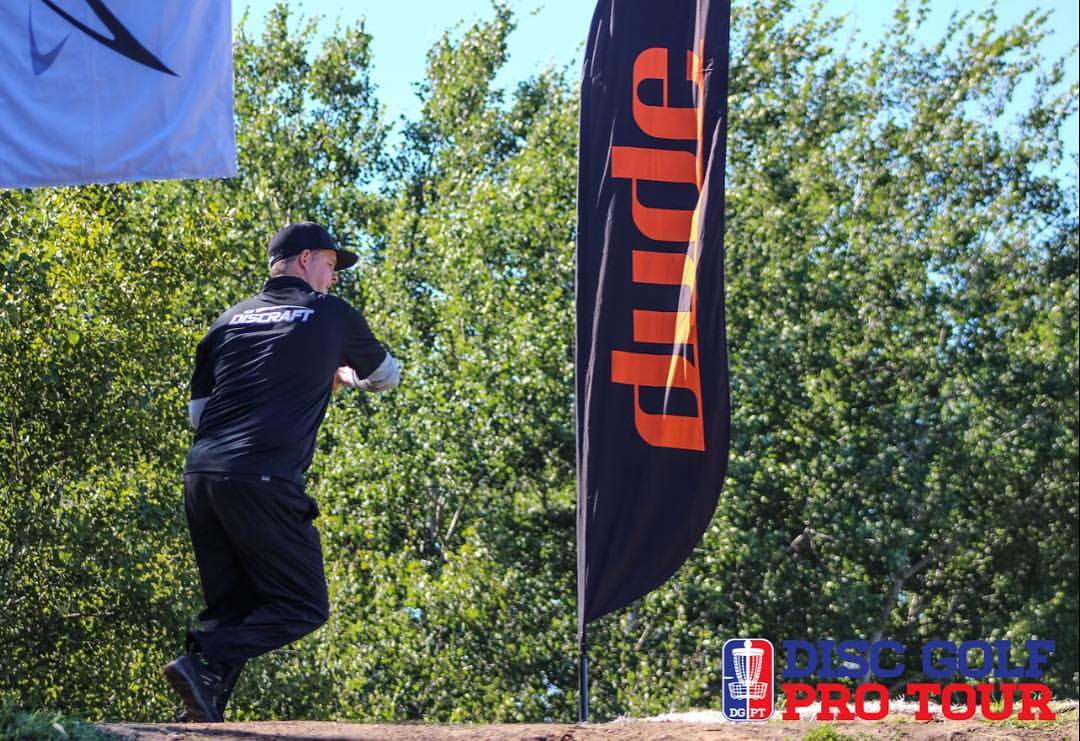 At one point in the final round of the Disc Golf Pro Tour’s Minnesota Majestic, it looked like Nate Doss was going to run down the leaders and take the win away from a slew of pros on the lead card. Thanks to birdies on 11 of the first 13 holes in the final round, Doss was putting up a very low score and the rest of the field was on notice.

Even as he got in reach of the lead, he was’t able to find that extra gear as time ran out before finishing in a tie for third.

We talked with Doss as he made his way from Minnesota to Kansas for the upcoming PDGA World Championships.

You finished tied for third and you almost pulled out the win thanks to a hot final round.  Does the end result satisfy you?

“Simple answer: yes. Very satisfied with the performance especially coming off the long travel from Sweden. Didn’t start off as fast as I wanted, but finished strong, especially rolling into Worlds.”

“I knew Nate Sexton shot the course record in the first round. I talked with Jay “Yeti” Reading after the second round and said if you can get through the first part of the course without any mistakes you could shoot low. I wanted to start hot and I pulled it off. In fact, on one of the two pars I carded to start the round I had a 20 foot missed putt and later on the shortest hole, 155 feet, I kicked into the woods. Could have gone 13 for 13 if I wanted.”

“It was a do or die type moment. I knew a score of 15-17 under par would put me in the hunt and that score would have won it for me.”

You wanted to remain accurate off the tee going into this tournament. Were you able to accomplish that?

“For sure! I came back after the final round and told my wife  I feel like I have these disc son the end of a string. It’s been that way been the whole season. I feel confident in what I’m throwing and have a good set.”

“I’ll shoot some practice rounds and just feel dialed in. I want to continue to improve, but keeping up is key. Over the last four or five seasons its been about the putting green though. Need to release some of the fear of missing putts. When I can do that I can make them. Need to clean it up.”

You also talked about peaking right before Worlds as a goal you have every year. Do you think that is the case this season?

“It’s funny… we say this every year and I’ve said it during these interviews too. We all play for the Majors and to peak at Worlds. One of the biggest things is to be doing near Worlds is to not feel like I need a lot of practice. I want to go on the courses, learn the holes, find my shots and come Worlds now, that’s where I’m at. I don’t need to play every day and do field work.”

“Focusing on keeping my body in top shape and going to Worlds with a potential to win. I’ve played quite a few of these and you can’t predict it. Have some faith and go with it.”

As we’ve said World’s is next, but you have some other plans in store too. Tell us about that.

“We’ll be in Emporia, Kansas on Tuesday. Wednesday we fly to Maine to do a collaboration beer with Baxter Brewing Company from Baxter, Maine. They’ve been excited about it and for Women’s Nationals we’ll put together a recipe for the competitors. We’re doing a Red IPA. We’ve worked on it with their brewer and will work on brewing this Thursday about it before flying back on Friday to Emporia.”

“Maybe a crystal ball into our future of disc golf and beer at the same time. We’re excited and needless to say we’re wanting to do more of this in the future.”

Each week when we’ve talked to Doss we’ve continued to see confidence grow. Beyond knowing what he’s doing well, he has also been able to identify where he needs to work on moving forward. With the World Championships next before two final Disc Golf Pro Tour stops leading up to the Tour Championship, there is plenty to look forward to and we’ll be with Doss every step of the way.