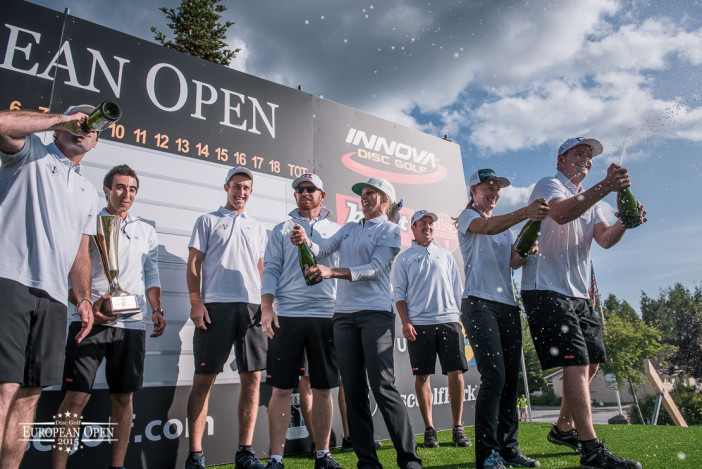 The 2015 Disc Golf Presidents Cup was played in beautiful sunny weather at Nokia DiscGolfPark. The teams lead by team captains Derek Robins (Europe) & Eric McCabe (USA) were in great shape despite some last minute player changes on Team Europe’s side.

As expected, Team USA started strong straight out of the gates with the first half of play resulting in solid 19-9 lead for Team USA. The hungry and highly motivated Team Europe was not going to give up the fight easy however, as the second half of the event was set to be played in match play format, man against man and woman against woman. As previous years have shown, the match play is definitely the stronger part for Team Europe and they were able take home 13,5 points on the 2nd half with Pasi Koivu, Seppo Paju, Simon Lizotte and Henrik Johansen winning their pairs and Natalie Holloköi tying her match with the reigning FPO European Open champion Paige Pierce.

In the end the match play wins for Catrina Allen, Paul McBeth and Nathan Doss secured the victory for Team USA from the 7th edition of the Disc Golf Presidents Cup.

Throughout the European Open week at Nokia we will air a total of 5 live broadcasts on, hosted by The SpinTV’s own James Thomas. Each 30-minute episode will feature live studio interviews with the players, news from the course and high-definition footage from the event. Take a step inside the ropes from Wednesday to Sunday!

Editors notes: Published in partnership with the European Open staff. There were some audio issues with this video broadcast. They are being fixed for future shows.