For Scott Stokely, disc golf is more than just tournaments around the country. It is a chance to make a difference. Stokely, along with help from friends and family, has started the Blue Power autism awareness campaign. He’s taking time away from the tournament to invite participants into a conversation about autism and other disorders we all come across in our daily lives.

While the Blue Power campaign started a few months ago, things are beginning to ramp up as we head into a very busy 2016 season. Today, we talked with Stokely about Blue Power and his new involvement with the Disc Golf Pro Tour.

“I guess if I had 60 seconds to make an elevator pitch I would say that I’m a disc golfer and Frisbee player with a bunch of World and National titles and a few world records who is trying to spread autism awareness through a campaign called Blue Power. Through my website BluePowerEvents.com I would like to coordinate 400 autism awareness events in 20 countries in 2016. My goal is to help end the isolation often experienced by those with autism as well as their families.”

“Honestly, I am on a mission and any talk about me, I want to wind up as a discussion about Blue Power.”

After getting back into the swing of things last year, you have your sights set high for 2016. Does it feel good to get back out on the course in these competitions?

“It does feel good. I was shocked after taking 13 years off that I still had something left in my tank. After about a year trying to get my game back it finally started to click last summer. I ended up winning 13 of my last 16 PDGA tournaments of the year (6 Masters and 7 Open). I won an NT in the master’s division. Best of all, I won my last Masters tournament (an A-Tier) by 20 strokes and my last Open tournament (Also an A-Tier) by 12 strokes. During this stretch I was shooting around 1020 rated golf and improving. I’m feeling really good about my game right now!”

“At the same time, winning tournaments is really more of a means to an end. The more relevant I can keep myself, the more I can do for the special needs community and autism awareness. That’s why I posted this video at the end of the year. It is my “List of Demands” for tournaments I go to. Even though calling it “demands” was just a way to create some controversy to get eyes on what we are doing, I am serious that I won’t play tournaments that aren’t on board with us…”

Along with the tournaments you’ve started this new Blue Power campaign. Tell us about it. 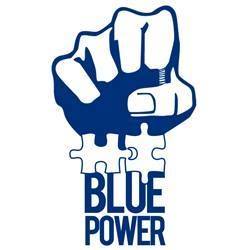 “First, last year my fiance Christin and I, along with my friend and winter series manager Steve Hollaway, created Blue Power. Blue Power is our campaign to spread autism awareness throughout the disc golf community. The primary focus is on ending the isolation experienced by many people with autism as well as their families. The inspiration behind this is Christin’s 22 year old son Patrick and Patrick’s entire family.”

“Second, Christin and I have been offering classes all over the country for those with special needs and their families on how to play disc golf. Disc golf is the perfect activity for these families because it’s a parallel sport. This means people of all skill levels can compete side by side each enjoying the sport in their own way at their own level. It’s also free for the most part, which is huge.”

As you’ve been rolling out this autism awareness campaign, what has the initial response been like?

“It’s been incredible. Autism is one of those things that is everywhere but until I had a connection to the community I wasn’t even aware of how widespread it really was. Now that I’m in front of this I have been contact by so many people, many I have known for years to tell me how autism affects their life. I’m not talking about one or two people, I mean hundreds.”

“As for those not affected directly, the response has been incredible as well. Nearly everyone has been supportive of our efforts. When we announced BluePowerEvents.com we were contacted by over a 100 clubs in the first 24 hours wanting to run a Blue Power event. It’s been incredibly overwhelming and emotional for Christin, Steve and I.”

You’re also jumping on board with the new Disc Golf Pro Tour. Tell us more about this.

“When I released my ‘Demands’ video (embedded above) I wasn’t sure what to expect. Fortunately the result has been super positive. Lots and lots of clubs and tournament directors contacted me asking me to come to their events. I’ve been flattered by I every one of them. What scared me though was that the major tournaments had been fairly silent.”

“Then just a couple weeks ago Steve Dodge, the coordinator of the Disc Golf Pro Tour, contacted me and said he wanted me to come to every event on the tour. He told me they wanted to promote Blue Power and allow me to teach my special needs classes. He even offered to do more than I was asking for to promote Blue Power. I was blown away.”

“So I’m going to be at every event on Disc Golf Pro Tour promoting Blue Power and teaching my special needs class during the week leading up to the event. Then when the weekend comes I will put on my other hat and I will be competing with everything I go to win these events. My goal is to become Tour Champion and I will do everything in my power to accomplish this.”

We saw the success of the St. Jude Invitational last year and now the start of Blue Power for autism awareness. In your opinion, how important is this philanthropic side to disc golf?

“It’s not important for disc golf, it’s important for everyone. Being a good person and doing good things is something everyone can do. For me, I happen to have a voice in my sport and so I am using it. I have a reach and I am using it to make the world a better place.”

“As for other top players in the sport and the players on tour, I probably have an opinion different than what you would expect. I will never get all smug and high and mighty and say they should be doing what I am doing. I believe their primary focus should be competing and trying to become the best in the world. The physical window to compete in sports is small and if they want to be the best in the world this has to be their primary focus. I will never knock a top player for being consumed by their desire to be the best. In fact, I admire them for it.”

“However, I hope that once window closes, down the road I will have planted the seeds of how awesome it can be to use the name they created to do good in the world.”

Another side of the Blue Power campaign are the power rankings. Why did you want to put these together and how are they calculated?

“This is just one of many promotions we are doing to get eyes on our cause and on our website. I think it’s really fun and over time I hope it takes on a life of it’s own and is something people look forward to every two weeks and talk about it every time the rankings come out. It’s also great that we have such a diverse group of people voting. We have Finland, Switzerland, Sweden, and the U.S. represented now, and we hope to add more media partner voters and countries as we grow.”

“I also hope they are controversial. Because they are subjective of course people will disagree with them. For example, based on recent results, I thought Michael Johansen deserved to be #3 in the rankings. All the other voters disagreed with me yet I believe that I was right and everyone else was wrong. This is the fun of the rankings.”

If people want to get involved with Blue Power, what can they do?

“Go to BluePowerEvents.com and sign up to run a Blue Power Event in 2016. We will do 80% of the work including handling online registration and dealing with player packages. We will even pay you to run the event. We just need people to jump in to set a date, promote the event locally and in social medial and then run the event the day of.”

Anything else you want to include?

“I cannot begin to thank everyone enough for all their support of everything we are doing. I want to especially thank MVP for not only making all the discs I throw, but also for their significant donation and support to our Blue Power campaign. I also need to thank Fly Green, Hyzerbomb, and Gateway Discs for all their support this year.

Thanks to Stokely for the conversation! It’s great to see people in the sport use their visibility for a good cause. We can’t wait to see where Blue Power can go!