You are at:Home»Reviews»Other»ScoreBand keeps your score just a touch away 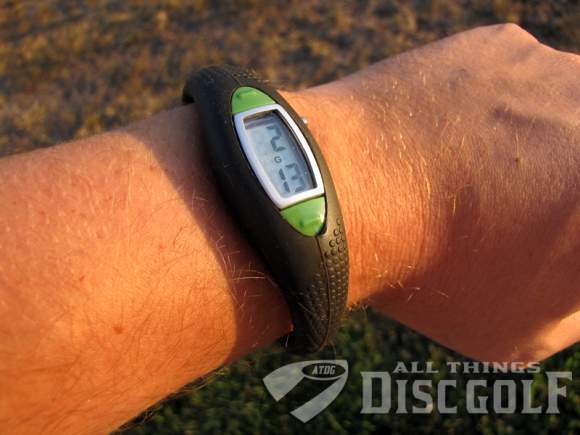 After starting out in the ball golf field, ScoreBand has been setting their sights on the disc golf world. ScoreBand is a lightweight, watch-like, wristband to help you keep score during your round. ScoreBand sent us one to take out on the disc golf course to see just how easy it is to use.

ScoreBand has four modes: Time, AllScore, Tennis, and Golf. Time mode is a clock, AllScore allows for sports such as basketball, table tennis, or volleyball for example, Tennis will count in the typical Tennis scoring, and Golf allows you to keep track of your current hole and your total round at the same time.

ScoreBand is made of a water-resistant, eco-friendly silicone. It can easily stretch to fit over your hand before resting comfortably on your wrist. The ScoreBand is very lightweight and was never distracting during the round.

We obviously kept ours in Golf mode during our tests. ScoreBand has three buttons. The side button will switch modes while the top and bottom buttons will change the score. In Golf mode, you press the top button for each throw you take. At the end of a hole, press and hold the bottom button until it totals it. It is really that simple. As we were talking to our next shot we’d just quickly reach for the ScoreBand, log the previous throw, and continue on. We never felt interrupted while using it.

While there are many options available to keep track of your score during a round, the ScoreBand is one of the easiest to use. There are countless apps available for smartphones which help you keep track of your score during a round, but those could expose your expensive phone to elements and potential damage. If you keep your phone in your bag, you need to reach down, pull it out, and unlock it before you can even enter your score. If it is raining, this could cause potential water damage to your phone.

The ScoreBand really came in handy at the end of a round. After a round in a local league, others were totaling up their scores while we already had a total waiting for us and we still had full battery life on our phone. While the pencil and paper scorecard was still the official score, it was nice having quick, easy, and unobtrusive access to our score during the round.

After using the ScoreBand, we reached out to the founder and president of ScoreBand, Jody Murdough to find out some history of the ScoreBand and what they have planned next.

All Things Disc Golf: How did the idea for ScoreBand start?

Jody Murdough: After years of playing recreational sports and experiencing/witnessing the effects of losing track of the score (disputes, mental performance, delays, errors) it hit me that there was a need for a simple, convenient and non-impacting device to keep score for recreational sports. Of course the idea occurred many years ago, but the opportunity arose in 2011 after departing from my prior business. So it was really my career timing with the newly available freedom to explore the idea further that sparked its inception. The design itself evolved from the growing popularity of athletic wristbands for performance benefits and/or charitable causes along with the improved technological capabilities that allowed for more programming into a smaller space at an affordable cost.

All Things Disc Golf: You guys started in the ball golf field and are just now starting to get into the world of disc golf. Has it been easy to introduce ScoreBand to disc golfers, or no?

Holly Finley wearing the ScoreBand at the Beaver State Fling in 2013. (Photo: Twitter)

Jody Murdough: Actually, the simplicity of the concept makes it easy for disc golfers to grasp how it would benefit them. Disc Golf is an ideal sport for ScoreBand. Since players are already walking and carrying DG necessities, anything that helps reduce hassle is a plus. Also, the benefit of taking a player’s mind off of the score and redirecting their focus on performance is universally appealing to recreational athletes. So the entry into the Disc Golf world is a natural fit.

We also partnered with the PDGA early-on to help gain exposure for ScoreBand and received a very enthusiastic reception from their membership. We have also teamed-up with Holly Finley a rookie on the PDGA Pro Tour. Her energy for growing the game is infectious and we are proud for her to represent ScoreBand and introduce it to more disc golfers at her events throughout the year.

All Things Disc Golf: Is the printable size guide on the website the best way to gauge size if you don’t have a box around?

Jody Murdough: That, or simply measuring around your wrist with a measuring tape/tape measure. If you don’t have access to those options, we have found that Medium is the most popular size for Ladies and Large for Men.

All Things Disc Golf: What’s next for ScoreBand?

Jody Murdough: We are actually in development of a next generation ScoreBand that will incorporate many new enhancements and features. From Day One of ScoreBand’s release we have kept in touch with our customers through surveys and phone calls to find out what they like/don’t like about it and what improvements/features they would like to see. We have learned a lot in ScoreBand’s first year and are excited to launch the next version later this year. Stay tuned.

ScoreBand comes in four sizes, two band-color and four button-color options. You can order a ScoreBand from their website with just $5 shipping to anywhere in the United States.

ScoreBand is a great, simple solution to help you keep track of your score on the disc golf course. It won’t get in the way and it won’t distract you during the round. Be sure to follow ScoreBand on Twitter and Like them on Facebook.