You are at:Home»Reviews»Putters»Salient Discs Touch Review

The Salient Discs Touch is the putter with Todd’s name on it and Salient believes it has a unique flight:

Touch is our first big bead putter and features a comfortable in hand feel with easy release. Touch features a neutral flight path at high speeds with a lower fade than other beaded putters on the market making this disc great for both putting and drives off the tee.

Salient sent us a Touch to try out in their Karbon plastic. The Karbon plastic is a nice blend for a base level plastic. While it is certainly more durable than a DX, it is more inline with Innova’s Pro, but has a slightly different feel to it. There is a nice amount of grip in the Karbon plastic and is soft enough to allow you to dig into it, but hard enough to maintain it’s initial shape after being used. It’s certainly right in line of what many look for when it comes to a base plastic for putting.

The Touch itself feels quite small in the hand. Even though it is the same overall diameter as an Aviar (21.2 cm), it has a a touch smaller inside rim diameter (17.8 cm) than both the Aviar (19.4 cm) and Challenger (19.0 cm). It might not seem like a lot at first, but the Touch does feel smaller than others. To us, this small feel translated to a lot of control in the disc. Since our hand was able to cover a lot of the putter’s surface area, we felt like we could really make the Touch do what we wanted. From off the tee to inside the circle the small feel of the Touch was certainly a positive.

Along with a very flat top you’ll find a rounded profile leading to a relatively large bead. The bead is quite noticeable for a putter so small. Sometimes the bead could almost blend in with the rest of the disc. That isn’t the case with the Touch. It is almost as if they made a putter and molded on beat afterwards.

Off the tee the Touch was a decent driving putter due to a relatively stable flight, but it lacked a little glide. The Touch will resist turn quite a bit and fly on a nice stable path for the first part of the flight. Even into a decent headwind the Touch would perform as desired. The low profile and small feel translated to a nice release and, again, a lot of control.

While it was nice and stable at high speeds, the Touch didn’t have a large amount of glide. It isn’t horrible, but we were wishing for a little more. The low profile does translate to this slightly reduced glide, but we did find it useful inside the circle. For those who are more of a spin putter and like to hammer their putter right at the basket, you might like what the Touch brings. It won’t glide out on you and leans more on you to get it there instead of just letting it fly. 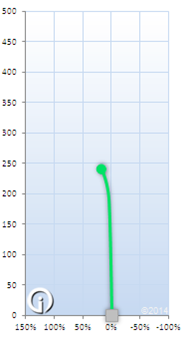 Now, at the end of the flight, the Touch had a slightly softer fade than expected, especially with the size of the bead. We wouldn’t quite call it as soft as a 1 rating for fade, but would comfortably put it at around 1.5. It will consistently finish to the left, but it won’t dive in too hard. Again, this was nice inside the circle. We knew the Touch wasn’t going to turn on us during putting and could quickly get a grasp of the fade and allow it to crash into the chains easily.

Overall, we’d rate the Salient Discs Touch at 2, 2.5, 0, 1.5. For a big bead putter it has a nice amount of stability at high speeds that is followed by a fade that is actually softer than you’d expect. It won’t glide too much on you, but can hold onto some power.

The flight chart from inbounds Disc Golf shows a flight very similar to what we were experiencing. We were seeing slightly harder fade, but the rest of the chart is very accurate.

As we said at the beginning, designing a putter for a professional who is known for his putting can’t be an easy task. Salient Discs has certainly put out a strong effort with the Touch. It has a very small profile to it and actually feels like one of the smallest putters we’ve ever used. This small feel translates to a lot of control. With a high speed stability that is able to hold up to a mild headwind to a soft, yet predictable fade, the Touch can be of use both off the tee and inside the circle.