You are at:Home»Reviews»Drivers»Salient Discs Prometheus Review 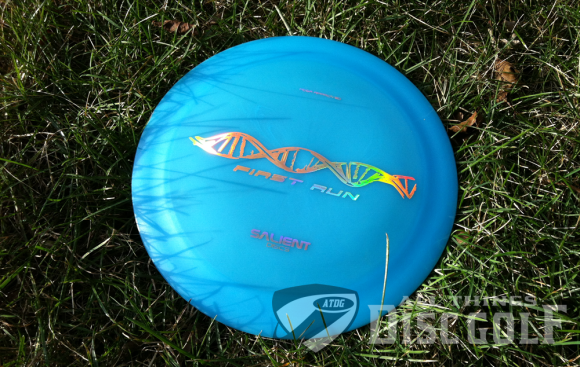 Over the last few month’s we’ve been in communication with Salient Discs. The new disc golf company’s first disc, the Prometheus, is starting to make its way around disc golf courses. As it gets around the country, heads our turning. Salient Discs sent us a few test runs to review and we’ve spend the last few weeks on the course with them to see what the Prometheus is all about.

For those unfamiliar, the Prometheus is a wide diameter, wide rimmed driver. While other drivers like the Innova Destroyer or the Discraft Nuke have diameters of 21.1 cm and 21.2 cm respectively, the Prometheus comes in at 22.6 cm wide. The sheer size of the disc is really eye catching. Even if you don’t know what it is at first glance, you instantly notice the size.

Along with the wide diameter, the Prometheus has a very wide rim which measures 2.6 cm. It is just slightly larger than the Nuke (2.5 cm). While some disc golfers love a wide rimmed driver, many find it hard to grip. Because of the wide diameter, you are actually grabbing onto more of the rim on the Prometheus. The arch of the rim is much wider and allows you to get a more comfortable grip. Even with that said, you still need quite the grip to hold onto the Prometheus.

The Prometheus’ plastic is quite flexible and gummy. Part of this is due to the wide diameter. We found that the plastic felt quite nice and allowed us to feel like we did have nice control on the very wide rim.

We’ll admit that it took us a while to really figure out the Prometheus. It really is a different animal. Because of the wide diameter, it is a little hard to compare to other discs currently on the market.

Right away we noticed that you do need a pretty good snap to get the Prometheus going. The two we were testing weighed in at 188 and 185 grams. You really needed a quick strong finish to your throw to get it to fly as advertised.

Along with a strong snap, you also need to keep the nose angle down. If you get the nose up at all, the Prometheus will certainly act more overstable than you wanted. The wide diameter already puts more air under the disc than you are used to. If you raise the nose up and add even more air, you’re going to not see the results you were looking for. This is a very important factor when throwing any disc, but especially the Prometheus.

We also need to give Salient Disc owner Christopher Kilgus a lot of credit. We’ve had a lot of questions throughout our testing and Kilgus has been able to help us understand this disc better. Initially, we were looking at the wide rim and expected monster distance and a very high speed flight. Kilgus helped us get our thoughts straight on the Prometheus when he said “control driver, not distance driver.” This is when it clicked for us.

During our initial throws, we felt like we weren’t getting the distance we expected. We were certainly hitting some nice lines, but it wasn’t blowing us away with distance. After we talked with Kilgus we then realized the Prometheus was doing exactly what it was designed to do: achieve distance with accuracy.

We initially were thinking the Prometheus would measure at a Speed 14-15 just due to the size of the rim. Even with the wider rim, you need to remember that rim is over a much wider surface area. In reality, the Prometheus flies around the Speed 10-11 range in terms of distance during our tests.

The two test discs we had did have a little added dome to it. These were a little more overstable than we were expecting, likely due to the dome and the heavier weight. Kilgus has said they have been able to get the Prometheus into lower weights which has helped the flight out for many who have thrown it in the 170-175 gram range.

Luckily, another local disc golfer purchased a production run Prometheus which came out flatter than the two we were using. We were able to throw the flatter version and this also showed a slightly more understable flight. We were able to achieve slightly more distance, but on a much straighter flight. The production run Prometheus had a little bit of turn at high speeds followed by a moderate fade at the end.

We were able to release it on a little hyzer and see it flip up flat and glide down the fairway before finishing off to the left. If thrown flat, you’ll get a little turn to the right before a fade that just brings it past center. We also gave the Prometheus some nice sweeping hyzer lines and it would hold the angle and glide nicely down the fairway. The big hyzers actually reminded us of how a midrange can hold that angle on a controlled flight. 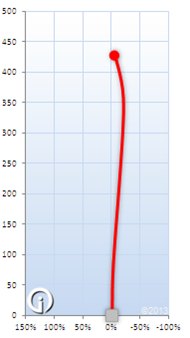 Looking at the flight chart from inbounds Disc Golf you’ll notice the straight, controlled flight from the Prometheus. This data for the flight chart was initially provided by Salient Discs and will be updated as more members of the inbounds Disc Golf team throw the Prometheus. This flight path is closer to what we experienced in the production runs than in the test runs.

We always like to end our reviews with the flight numbers based on Innova’s flight ratings. Admittedly, it is a little hard to put traditional flight numbers on the Prometheus because of the wider diameter. If we could take a stab at it, we would rate the Prometheus at 10, 5, -1, 2. You’ll see a little turn followed by a moderate fade.

The hardest number to lock down is the speed, but as we stated before, based on the distances we were seeing, we would put it around a Speed 10-11 depending on your arm strength.

Overall, the Prometheus is a fun disc to throw. It really allows you to really rip into it, but still see a very controlled flight. If you can keep the nose down and get a great snap, you’ll get the very straight flight. As with any disc though, go and get yourself one and see what it can do for you. This one is certainly in the category of checking out.