When you get into disc golf tournament play, there is sometimes the need to carry more discs than you typically would during a round. These might be backups to your most used discs in case of them being lost or thrown into a lake, different approaches could be taken on certain holes and you want to be prepared for whatever you come across, or you just feel the need to carry over 25 discs. If you fit this description, the Salient Discs Helix Backpack can certainly stand up to the task.

The Helix is one of the largest disc golf backpacks on the market and is advertised to hold between 25-35 discs. While this is likely beyond the capacity that most disc golfers need, it certainly fills the high end of the capacity spectrum quite well.

Salient sent us a Helix to review and we’ve spent the last few weeks with it on the course to see just how the Helix could hold up with a full load of discs.

The first thing that stands out about the Helix is the overall size of the bag. The Helix is massive and has quite the footprint for a disc golf bag. For a comparison, the Dynamic Discs Ranger is much narrower than the Helix. If placed back to back, the width of the entire ranger back is about equal to just the main back piece of the Helix. The side pockets and cup holders of the Helix still protrude from each side. When fully expanded, the Mystery Ranch Golf Mahal is just about the same width, but with a different structure, the bags feel very different.

The overall frame of the Helix is quite sturdy and never showed any signs of weakening under use. Even with a full load of discs and side pockets carrying extra gear, the Helix stood up to the abuse quite well. The bottom of the Helix has three rails opposed to the typical two rails you find on other disc golf bags. Does this make a difference? It might. We’d love to see a Helix with just two rails to really see how much of an improvement there is with the third rail. We’re certainly not complaining, but it’s a little hard to tell how much value the third rail adds. We never felt like the bag was in jeopardy of falling over or not remaining as sturdy as we would expect it to be, so there might just be something to it.

I’m roughly 6’1″ and have a relatively wide shoulder base. The Helix was comfortable on my back and rode easily when fully loaded. It’s easy to expect a bag with over 25 discs in it to be quite heavy and almost a burden on your back, but the Helix never felt like “too much” and too heavy. A few other locals who tried out the bag who had a smaller frame found the Helix to be a little too big for them. If you don’t have a decently sized frame, you might want to look in another direction, otherwise, the Helix should be just fine for you.

The straps of the Helix are certainly up to par with the other features of the bag and offer enough comfort without being too bulky. There are straps with more padding and straps with less padding available, but for the shape and size of the bag it does seem like the right combination. The back padding on the Helix was nice and did help keep the pressure of a fully loaded back off of your back.

While we preferred to keep the main compartment not 100% full to make it easier to get discs out, it appeared as if there was also a minimum number of discs needed to keep the bag functional. When it was completely packed, it was a little hard to get the discs at the extreme ends of the bag out at times. That is to be expected with how snug everything was fitting. If we threw a few discs on a single hole or took a few extra’s out, the discs remaining in the bag would start to fall over and not remain upright. If you’re only wanting to carry 15 discs or so in that main compartment, the Helix is just too much bag for you. One solution would be using the main compartment for storage of other gear like towels, for example, but you still have the side pockets for those.

There are a handful of other areas on the bag that can be used for disc storage. The front flap that typically covers the main compartment can hold a disc when pushed back behind the discs. We opted to not use this option, but it is available for you. Directly above this slot there is the zippered Go and Get it Slot. This is very similar to the slot on the Salient Catalyst bag which we previously reviewed. With the Catalyst we actually removed divider that is inserted into the pocket. For the Helix, we found that we needed to keep the divider in there to really get the full function of it. We stuck three putters in the Go and Get it Slot and found it best when the discs were positioned on a slightly steeper angle. This slot is easily large enough to stick in multiple drivers too if the main compartment isn’t enough. 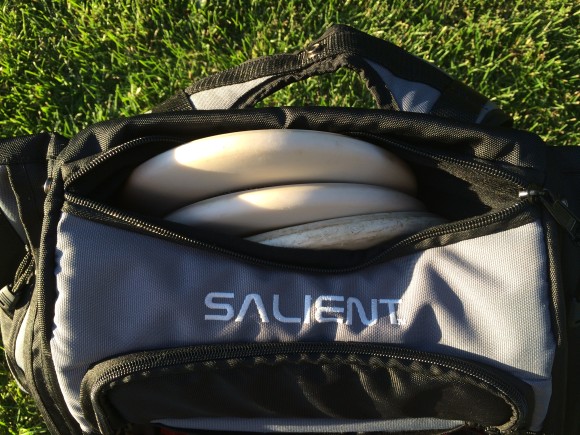 Finally, the pocket on the very top of the bag can be used for multiple things. It is lined with a softer fabric and is designed to hold personal belongings or can be used as a putter pocket. This is where we actually preferred to stick our putters the majority of the time during our tests. It can comfortably hold four putters and actually can be completely zippered shut when not in use. This “quiver” style pocket seemed to be the most desired in this setup, but the Helix does offer a lot of flexibility.

On each side of the Helix you’ll find two large zippered pockets which can hold quite a bit. We were able to easily throw in towels, hoodies, and more in these pockets. There is actually a small pocket for a cell phone and a clip for a keyring. On the top side of these pockets there are little pouches that can be used for minis, food, or any other small accessories. For as deep as these pockets are, we were a little surprised to not be able to comfortably fit any discs in these side pockets. Granted, you already have a lot of disc storage, but we almost assumed you’d be able to stick some on the sides too. To be fair, you can get some drivers in there, but they have to go behind a flap on the inside to really fit and even then, the pocket can be a little hard to close.

Other features of the Helix worth noting include two large sized cup holders on each side along with a rainfly to keep your discs dry. On the outside of the side pockets you’ll find a zippered pocket for scorecards, minis, and other easily reachable items. There are also straps that can be used to hold down a stool or umbrella as well.

Overall, if you’re in the market for a large capacity disc golf backpack, the Helix can certainly fit the bill. With disc storage between 25-35, multiple options for a putter pocket, and a sturdy and firm base, the Helix can be quite the tournament bag. It never tipped over on us during use and easily kept everything inside the main compartment. If you do have a smaller frame, or don’t have the need to carry this many discs, the Helix might be too much bag for you. If you are looking for something to carry almost more than you need, then this is it.

Salient is also offering the Helix at two different price points with two different warranties. For a limited time, they are offering the Helix at $160 with a limited warranty only covering the stitching on the straps. You can also get the Helix for $210 with a full lifetime warranty. When you combine the warranty, cost, and storage capacity, you’re certainly getting quite a bit for your dollar with the Salient Discs Helix bag.