You are at:Home»Reviews»Midranges»Salient Discs Antidote Review 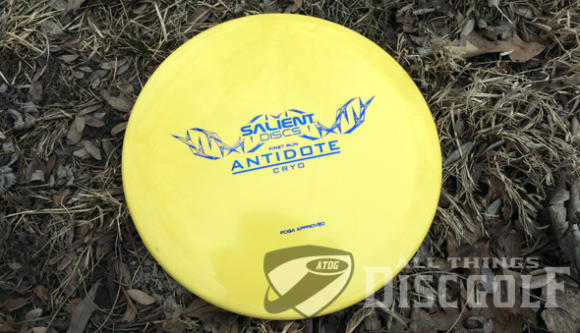 After releasing the wide-rimmed, wide-diameter Prometheus, Salient Discs slowed things down for their second release: the Salient Discs Antidote.  Salient Discs was kind enough to send us a few Antidotes in their Cryo plastic to review.

The Antidote to what you ask? Well, we can’t answer that question, but Salient Discs can:

Antidote is the solution to all your short range and approach shots. Developed to have the optimal amount of glide and fade for controlled approach shots, Antidote is sure to fit into any players bag. Give it a try and your ill fated mid-range game will be healed.

Ahh, so there it is. The Antidote will heal your midrange game. Before we get into the description of its flight, we need to first touch on the Cryo plastic. Cryo does feel like a great plastic blend. It has a lot of grip which easily translate to a lot of control. The Antidote’s rim in Cryo is just a touch on the firm side, yet the flight plate is nice and flexible. You can easily dig into it with confidence. We’re anxious to try out other discs in Cryo plastic.

The Antidote falls into the slower class of midrange discs. That doesn’t mean it lacks distance though. Instead of relying on speed to go down the fairway, it leans heavily on glide. When you first grab the Antidote you’ll notice the deeper feel in the hand. You won’t want to power grip the Antidote. There really isn’t enough there to really hang on it. If you use a fan grip, which is typically what you’d use for more control, the Antidote is very comfortable.

As the Antidote flies, you’ll notice that isn’t a speed demon. For a very controllable, understable midrange, you don’t want a lot of speed. When you do get it in the air, the Antidote wants to remain there. The amount of glide in the Antidote is really outstanding. It will hang in the air longer and carry out a full flight easier than some of the other slower midranges on the market.

Now, we mentioned understable and the Antidote is without a doubt on the understable side of the spectrum. If you have a cannon for an arm and try to overpower the Antidote, you’ll have a bad time. It just isn’t made for that type of shot. If you have average or below average arm strength, the Antidote could easily fit in your bag. Slower arms would be able to put their power into it and see a very nice straight flight.

On a flat release, the Antidote will start to turn right pretty quickly and hold that angle for most of the flight. If you have that shot you need to go right and stay right, and isn’t over 300 feet, the Antidote could help you. If you give it a little hyzer on release, it will flip to flat, roll a little to the right before finishing pretty straight.

The fade of the Antidote is minimal. If anything, it has enough to break it out of a turn and back into a flat flight. It won’t come back to the left that much, but you will see it settle down slightly. 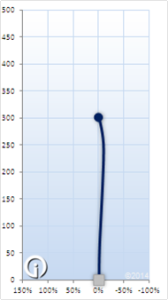 Where the Antidote can really shine is on approach shots. Because of the high amount of glide and understable flight, you can take a little power off of your throw and have it glide nicely down towards the basket. If you need a slight anhyzer angle, it can do that, if you need a straight flight, it can do that as well. If you need a little hyzer shot, you’ll need to give it plenty on release and let it’s natural flight help you out. It won’t want to carry left that much at all.

Overall, we give the Antidote flight numbers of 4, 5.5, -2.5 to -2.75, 0.5. The speed is slim, but the glide is high. Expect an understable flight that can carry some very straight lines with control.

The flight chart at inbounds Disc Golf shows the flight pattern we saw on many of our approach shots. Granted, the distance is a little long for approach shots, but the straight flight was common. On drives, expect a little more turn than shown, and for the Antidote to rely on glide over speed to get some distance.

The Salient Discs Antidote likely won’t be your go-to midrange off the teepad unless the hole is around 200-250 feet. With the combination of low speed and high glide, the Antidote is very controllable. It can easily fly on anhyzer lines without needing to help turn it over and if you take a little power off of it and with a little hyzer, you’ll get a very nice straight flight. If you need a disc that is longer than a putter, but shorter than other midranges for your approach shots, the Antidote might just cure your troubles.

Win your own Salient Discs Antidote

Thanks to Salient Discs, we have two Antidotes to giveaway. The deadline to enter is 11:59 p.m. on Wednesday, March 5. Winner will be announced on Thursday, March 6 on our Facebook page. Ways to enter:

My disc golf game is sick & I need the Antidote! @ATDiscGolf is giving an Antidote from @SalientDiscGolf! #discgolf http://is.gd/ATDG_Antidote