The second release from Reptilian Disc Golf is the new Serpent putter to go along side the previously released Scale. The Serpent brings a straighter flight when compared to it’s Scale cousin. You won’t get a lot of fade out of the Serpent and you can trust a very consistent flight time and time again.

Reptilian Disc Golf says this about their new putter:

The Serpent features the RDG top paired with a beadless bottom to produce a much straighter, more beginner friendly PnA mold.

The Serpent is easily one of the most gyroscopic discs on the market. You can just feel how much mass is on the wing of this mold. The flight plate feels as though it is weightless, while the rim is incredibly dense. Because of the weight concentration, these Serpents are very flexible but still hold their shape beautifully.

Reptilian Disc Golf sent us a Serpent in both a Chalk RFF plastic and Fossil plastic. The Chalk RFF plastic has that expected chalky feel as the name implies and a much softer touch. The Chalk RFF Serpent is much more flexible and can easily be flexed by the hand. The flight plate has a lot of give to it and can actually hold a small change in shape after digging your thumb into it. If you are a fan of softer putters, this will be up your alley.

On the other side of things, the Fossil Serpent is about as stiff as you can possibly be. It’s surprisingly stiff almost to an extreme. There is no movement in the Fossil plastic. While we were easily able to almost bend the Chalk RFF Serpent in half, we were afraid of snapping the Fossil plastic in two as it was so hard. The flight plate had a small amount of give thanks to the thin flight plate, but that rim isn’t going to move. Some who were able to test it with us found it to be almost too stiff for them.

The Serpent features a very blunt nose and a relatively deep feel to it. It is a beadless putter and thanks to that blunt nose almost feels bigger than it really is. If you prefer a shallower putter, this might not be your top choice, but if you like that deeper, almost lid-like, feel, the Serpent might be the ticket.

The top of the Serpent has the same thumbtrack like groove that the Scale has. Your thumb likely won’t be placed directly in it due to the placement it close to the end of the flight plate. It doesn’t really come into play and shouldn’t be anything to worry about.

As for the flight, we began using the Serpent off the tee and did notice a much straighter flight than the Scale. While the Scale wanted to fade with some power at the end of the flight, the Serpent showed much calmer flight. There is a hint of turn, but it won’t be too dramatic. At high speeds the Serpent will be nice and straight regardless of your release angle. With a little hyzer it might flip up just a hair, while a throw with a little anhyzer on it will hold that line before wanting to fade out of it. You can really get a lot of control out of it.

As it continues down toward the basket you’ll see a little bit of fade kick in. The fade began a little earlier than expected, but it still wanted to fly forward. It never really dumps that hard to the left, but it will finish left of center. We suspect that once it beats in a little bit you’ll see this fade become even softer as time goes on.

The one feature of the flight that stood out the most was the glide, especially in the Fossil plastic. The Chalk RFF Serpent had an expected amount of glide, although it still wasn’t a lot. The Fossil Serpent on the other hand really lacked in the glide department. We were surprised the first few times we threw the Fossil Serpent and watched it just drop quickly. We threw it along side some other similar putters and it never quite had the glide the others do.

The lack of glide became useful as we were using the Serpent on small approach shots and inside the circle as a putter. We knew it wasn’t going to glide past the basket and we could give it just enough power to make it there. When putting inside the circle, spin putters seemed to like it a little more as they were able to really just go right at the center of the chains and give it some power to nail the putt. Pitch putters found they needed to give it a little more height to help it carry a full arc toward the basket. It will take a few throws to get a feel for just how much glide the Serpent has and how you need to use that to your advantage. 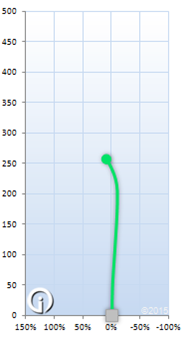 The flight chart from inbounds Disc Golf shows the slight turn we saw before just a hair of a fade. If you’re looking for a straight putter that you can have a lot of control over, the Serpent might be it.

The Reptilian Disc Golf Serpent isn’t going to do anything too crazy. It won’t have any big skip finishes and it won’t show big s-curve style shots. It isn’t meant to do that though. It is built to be a putter with a straight flight that you can have control on. If you want the straight flight, you can do it. If you want to put it on a little hyzer, give it the angle and the height needed and it will do the rest. The deeper feel and blunt nose will really give you a full feel which can translate to a lot of confidence in your shot. If there is one shot in disc golf you need confidence with it is with your putter and the Reptilian Disc Golf Serpent hopes to make that confidence level go up.