With a new working relationship with Gateway Disc Sports, Reptilian Disc Golf is looking to carve their own niche in the disc golf scene. Reptile’s first release puts a slight modification on an already popular putter and produces a disc with quite a bit of beef. The Reptile Disc Golf Scale is based on the Gateway Wizard with a brand new groove top.

The folks at Reptilian sent us a a few Scales to check out and see how much of a difference the new top makes.

The Scales that we tested came in Gateway’s SSS plastic and a firmer blend named Fossil. The Fossil Scale is a lot firmer and has a similar feel to a softer KC Pro type plastic. The Fossil Scale had a flatter top when compared to the SSS blend. Both versions feature this new groove on the top with the familiar beaded bottom you’d find on a Wizard.

The groove on the top isn’t very deep, but you can certainly see what it does to the flight. It is designed to create more drag and make the disc more overstable. More on that in a moment, but it certainly does the job. The groove isn’t what you’d find on the groove tops from Discraft, for example. The location of the groove is much closer to the edge of the disc. Where you naturally want to put your thumb is much closer to the center of the flight plate. Sure, its possible some might put their thumb in this new groove, but we feel like you lose a lot of control and accuracy that way.

Think of the groove like an inverted thumbtrack you’d find on an Innova Rhyno. While the Rhyno has a raised edge, the Scale has a groove that goes down into the flight plate at roughly the same depth. 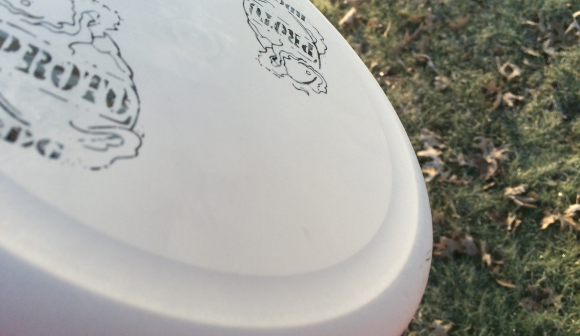 As we said, the main idea behind the groove is to make it more overstable. It only took a handful of throws to realize how beefy the Scale really is. We reached back and gave the Scale all we could give it and the Scale would show no signs of turning over. It easily held any line we initially threw it on. If we gave it hyzer at the start, it would remain at that angle the entire flight.

Don’t even think of trying to throw any turnover shots with the Scale. It will break out of any anhyzer you try and give it. While this might seem like a negative, you can easily turn this type of flight into a very controlled s-curve. If you don’t need it to go a long way, or you want to work around a small tree, the Scale will return on you time and time again.

When you hear about a disc this overstable, you hope that it can perform well in a headwind. Thankfully, the Scale loves a good headwind and almost performs better with one. You can trust that it won’t turn over on you at the beginning of the flight and you will soon learn how it wants to fade and fade quite hard. It will fade harder than a Wizard or an Innova KC Aviar. It actually has quite the punch at the end of the flight.

The fade came in handy on a few shots, especially approaches, where we had to work around some trees and even let the disc fly out of bounds for a part of the flight. The turnover shot wasn’t there so we were forced to carry it on a big hyzer line. We didn’t really need to add any hyzer to the Scale on release for this shot. We knew that once it started to power down, the Scale would really kick hard left for us.

Off the tee or as an approach disc, the Scale can perform well. It handles power with ease and loves a good strong rip. Slower arms might actually find the Scale to be too overstable for them at times. It does need a little added energy to really get going. You won’t win any putter distance competitions with the Scale. It just isn’t that type of disc.

Now, inside the circle, you get a putter with decent glide and a nice stable flight. Once you get a feel for the Scale’s fade, you can start to let the Scale just fade right into the chains. We’ve talked about how some putters you can aim right at the heart of the chains and just throw it right at it. The Scale on the other hand is a disc where you do need to account for a little fade. Putts right at the center of the chains might miss left if you don’t give it enough power to get there.

It glides nicely and will hang in the air a little for you, but be careful of the longer putts. The fade will kick in and send the Scale to the left maybe a little sooner than expected. You’ll either need to give it a little anhyzer to start out the flight or start the putt out a little wider, but you might lose some accuracy that way. 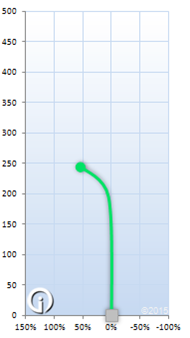 Overall, we’d rate the Reptilian Disc Golf Scale at 2, 2.5, 0, 3.25. Don’t expect any turn from the Scale. It just isn’t going to happen. The fade on the other hand will show up and certainly make itself known.

The flight chart from inbounds Disc Golf shows a flight very similar to what we were seeing. The flight remains very straight and stable at the beginning before dumping into a moderately hard fade at the end. Distance isn’t the thing with the Scale, stability is.

For Reptilian Disc Golf, the Scale is a great first step into the disc world. They set out to create an overstable Wizard and did so with ease. The groove on the top helps create the drag needed to make a flight that is very stable at high speeds and a flight that finishes with quite the punch. From drives and approaches to putts inside the circle, the Scale will be the overstable putter you’re wanting. As the ideas continue to come from Reptilian Disc Golf the types of evolutions they come up with will be exciting.