You are at:Home»DISCussion»Out of Production, but still producing: disc value is in the eye of the holder

If you frequent online enclaves such as the Disc Golf Collector Exchange group on Facebook, or the similar forum pages on Disc Golf Course Review, the acronym OOP is well known to you. It stands for ‘out of production’ and refers to discs that are no longer being produced by their manufacturer. This of course is significant to collectors because it means a disc that is OOP is in limited supply and therefore of potentially higher value.

It means something to me, too, but for a different reason. While collectors get excited about OOP, I get nervous.

Having played disc golf for more than 20 years now, I own close to 100 discs not including the stock I have on hand for use in my School of Disc Golf. But I would not consider myself a collector. Possibly a bit of a historian, and more than anything else an accumulator, I’d say. But as collectors are thought of as those who like to build a collection either as a hobby or for profit, I can safely say that isn’t me. 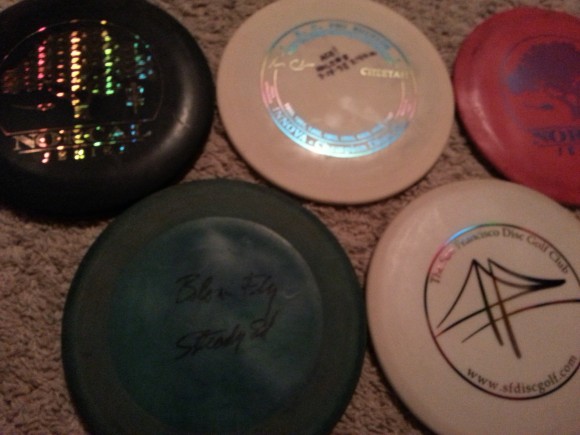 The author collects only discs with personal significance. Among this group are his first ace, most memorable ace, a disc to commemorate the opening of the first course in S.F., a NorCal ‘Hotshot’ disc awarded for the low round in a tour event, and a prototype DGA Blowfly signed and given to him by Steady Ed Headrick. Blurry photo by Jack Trageser

I have some discs that would go for much more than their original sales price if I ever decided to sell them, but all the discs in my possession that I value the most are dear to me for one of two other reasons: either I have a sentimental attachment to them—like my first ace disc or a prototype signed and given to me by Steady Ed Headrick—or they are out of production and I still use them to play. It’s the second of these that is the main subject of today’s post. Irreplaceable actually retains its literal definition when the object that is difficult or impossible to replace is actually serving a function rather than just gathering dust (in it’s dust-cover, of course). The mere thought of losing a key disc in your bag and not being able to replace it can cause little beads of sweat to form on one’s forehead—am I right?

In my bag right now, along with an Obex, Trak, Lace, Blizzard Ape, Blizzard Destroyer, ESP Nuke, Pig and two Aviars, are no less than four such discs. Every time one of those gems flies out of my sight I feel like a father whose teenage daughter is out on a date. (Okay, as a father with actual daughters I admit that’s an exaggeration, but still!) These are discs that if lost or broken would leave a big hole in my life, er, I mean my bag.

The author’s orange gummy Champion Beast. Purchased on eBay after it was already OOP, after he had already fallen in love with it as a ‘thrower’. (Photo: Jack Trageser)

First there is my gummy Champion Beast. It is a pre-Barry Schultz mold that flies very straight and is great for low, flat S-shots. And the material is virtually indestructible (I have a theory that Innova stopped using it because it’s too durable). I stocked up a bit on these so I’m prepared should it ever get lost, but still. OOP. 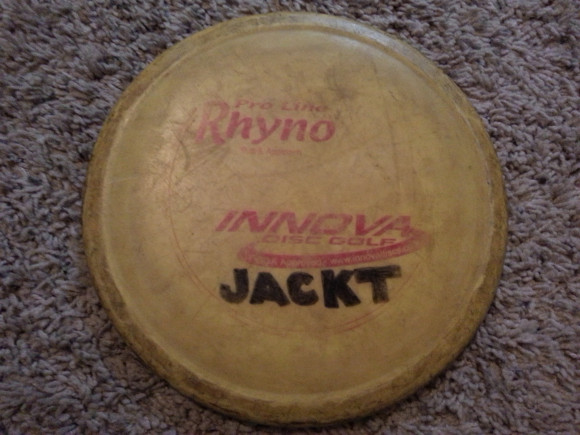 Next is my Pro-Line Rhyno, very soft and grippy yet firm for throwing. I’m sure I can replace it if I have to, but I’ve checked on eBay where I actually bought this one, after losing its predecessors) and the price is going OOP up…. 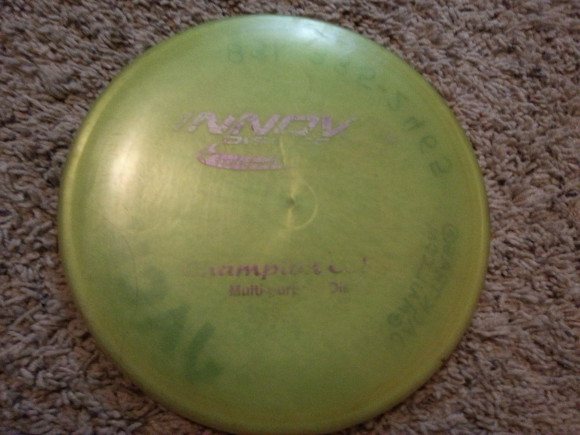 The first version of Innova’s Cobra made in Champion plastic. Very different from the original Cobra mold, and in the author’s viewpoint the perfect flat/turnover midrange disc. (Photo: Jack Trageser)

After that is a disc that is a perfect midrange for me as a straight flyer that can also hold a turnover line forever: my yellow Champion Cobra. This disc doesn’t say ‘First Run’ on the stamp, but I think they only made these in this mold for a short time. It’s very different from both the original Cobra and the ones being made now, with a completely flat top and decidedly midrange nose profile. I have one other one (in purple), but it doesn’t fly quite the same. Whenever this disc isn’t exactly where I expect it to be, my heart rate rises steadily until it’s safely in my bag once again. 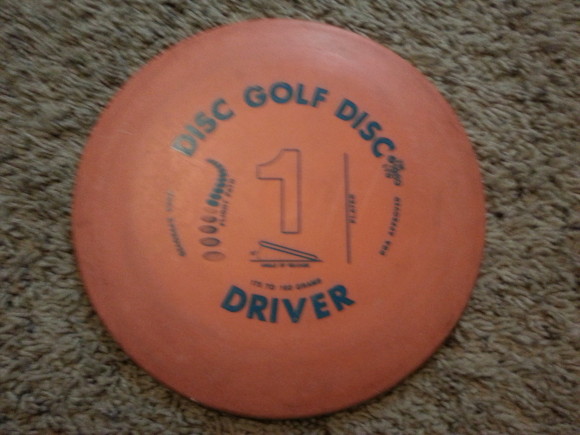 It says driver, but this one is now most valuable as a super finesse roller. Also, I bought it was purchased from the Father of Disc Golf. That’s something, too. Note the copyright date on the stamp of 1989. (Photo: Jack Trageser)

Finally, there is the great-grandfather of my bag, a 173-gram DGA Disc Golf Disc Distance Driver that was made in 1989. This baby has both practical and sentimental value. It’s my go-to finesse roller with no conceivable replacement waiting in the wings. And being a virtual antique made when there was no other plastic other than what is now known as ‘DX’ (Innova’s designation for the lowest grade) I cringe whenever it so much as heads for a tree. I originally purchased four of them from Steady Ed himself, at the DGA factory, but the other three have all died the deaths of brave warriors. There is virtually no chance of replacing this disc, and every time I get it to roll perfectly on my second throw on hole 13 at DeLa, it’s like watching one of those vintage World War I planes zoom across the sky. There is a sense of watching history unfold before your eyes, but also a nervousness around the fragility and irreplaceable nature of that disc in particular. Discs are meant to fly (and roll), though, and I’ll keep using it as long as I can.

By the way, a quick side-note about this disc: When I bought it in 1998 it was already out of production. Those who knew Steady Ed will appreciate the fact that he charged me $20 for each of them.

So my questions for you are, do you have OOP discs in your bag? What are they? Are you a collector who has rare discs that you’d like to throw but don’t want to reduce their value as collectibles? Use the comments section to join the conversation. I’m sure we’re all interested to hear the range of opinions on this one, and I personally love hearing about other antique discs that are still out there producing, even if they are officially Out Of Production.