You are at:Home»Reviews»Drivers»Prodigy Disc X1 Review 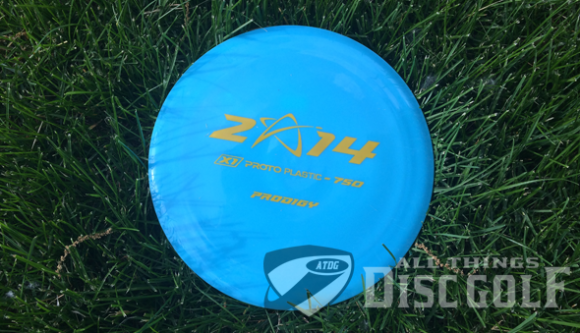 As the distance drivers from Prodigy Disc make their way from store shelves into bags of disc golfers around the world, one of the most common phrases we’ve heard is the desire for a driver that was more overstable than the Prodigy Disc D1. While the D1 is stable enough for most disc golfers, the strongest arms, and undoubtably some of Prodigy’s pros, were wanting something in that next level. Those wishes have been granted with the release of the Prodigy Disc X1.

Prodigy Disc says this about their latest release:

The Prodigy X1 is an extremely over stable high-speed driver. It was designed for the strongest throwers and can withstand the highest wind conditions. When you absolutely need an over stable flight into a stiff wind the X1 is the Disc for you. The X1 is also very effective for sidearm and overhand shots.

Along with the flight, we should also note the X1 has initially been released in their new 750 series plastic. The 750 plastic has a very similar feel to their 400 series and we’d almost suspect that in a blind test, we’d mix up the 400 and 750 series quite often. The 750 plastic is a touch firmer, but the grip is nearly identical. It certainly isn’t as stiff as Innova’s latest run of their “jolly launcher” Champion plastic though. There isn’t much to dislike about the plastic though. Plenty of grip  to go all around.

As for the flight of the disc, the X1 is without a doubt overstable. Before we give any details, if you struggle to reach the 300 foot mark on the course, the X1 will be too much for you. It not only can handle some power, it needs the power. It is equally as fast as their D-series drivers, but without a lot of glide and the desire to fade hard. If you have that 300+ power, or even 350-400 foot power, the X1 will still be overstable, but you’ll be able to get some added distance out of it.

With a 2.3cm rim and a pretty flat top the X1 will feel a little smaller than some other distance drivers. Without a big dome the sleek profile helps with the fast feel of the disc, but it also takes away some of the glide. If you are a forehand disc golfer, you’ll find a lot of positives in how the X1 will sit in your grip.

When you take the X1 out of your bag and  give it a throw down the fairway, you’ll immediately notice the massive resistance to turn. The X1 will certainly not flip up from a hyzer or even kick into a turn without the help of a strong headwind. Whatever angle you release the X1 on is the angle in which it will fly. When you are facing a headwind, you can have a lot of confidence in the X1. We’ve thrown the X1 in a 15-20 mph headwind and only our strongest throws showed the slightest amount of turn, but even then we never had any doubt that it would hold up and return back to the left.

The fade of the X1 is strong, but it isn’t something to be afraid of. Once you figure it out, it will be easier to predict in the air. The slower your arm is, the earlier the fade will want to kick in. As it begins to lose some power the X1 will begin to track to the left before really starting to fade hard the end. The strength of the fade will gradually grow for the first half of the fade before really accelerating to a knifing finish. 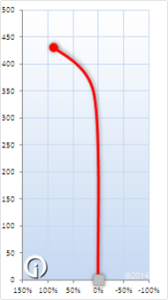 If you want to get some added distance out of the X1, you’ll need to help it carry that full flight. By forcing it into a slight anhyzer off the tee, the X1 will hold that anhyzer for just a moment before flexing back to flat and then into a fade. The more controlled you can do this, the longer your flight will be.

Overall, we’d rate the Prodigy Disc X1 at 13, 4, 0, 4. Expect no turn in normal conditions with a very stable turn when facing a headwind. The X1 will rely more on your power than its natural glide to carry out distance.

The flight chart from inbounds Disc Golf shows a fight very similar to what we were experiencing. With virtually no turn, the X1 fight a headwind with ease before fading out at the end.

For those who have been wanting a more overstable driver from Prodigy Disc and felt that the D1 wasn’t enough for them, the X1 is the answer you’ve been waiting for. With a very stable flight at high speeds and a strong fade at the end the X1 will be the headwind driver people have been looking for.