You are at:Home»Reviews»Putters»Prodigy Disc PA1 Review 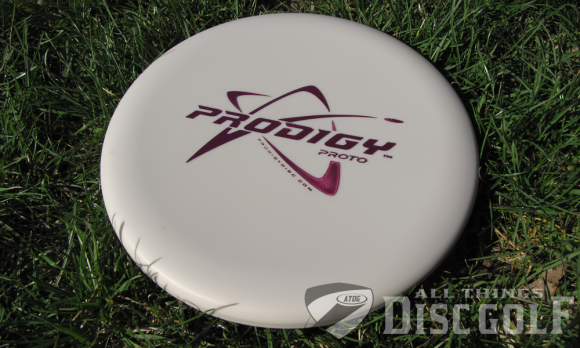 Finding the perfect putter can be a long process for some disc golfers. Everyone is searching for the putter that they can feel confident in and trust on every shot. Two of the most anticipated putters in recent years have just hit the market. The Prodigy Disc PA1 and PA4. We first took a look at the slightly overstable Prodigy PA1.

Prodigy Disc says this about the PA1:

Before we get into the flight and how they feel, we need to talk about the plastic first. The PA1 we had to try was in their 500 series plastic. At the time of this writing, most of the PA1 putters you can find in stores are in their 400 series plastic — the same as their drivers and midranges.

The 500 series is similar (but not exact) to Innova’s KC Pro. Prodigy’s 500 series plastic is quite stiff yet has some give to it. You could certainly dig a thumb into it and know it won’t slip away.

The disc we had wasn’t very chalky, yet still came out of the hand very quickly. It’s a very smooth plastic with a firm, grippy feel. No matter if we used it as a putter into the chains, an approach disc, or off the tee, the 500 series plastic provided reliable grip and a firm feel.

The PA1 is a somewhat shallow, beadless putter and feels small in the hand. It felt similar to the depth of a Gateway Wizard or Innova Rhyno.

We first gave the PA1 a test as a throwing putter. The PA1 flew a nice stable to overstable flight. It would resist turn when thrown at high speed and fly a very true line. At the end of the flight a moderate fade would kick in. While it can handle a small headwind, we certainly wouldn’t classify the PA1 as a windfighter. It would be in the same family as an Innova KC Pro Aviar rather than a Rhyno or Pig, for example.

The PA1 didn’t hold a very high amount of glide. It certainly wasn’t a brick, but it wouldn’t glide out too far.

We then moved our tests to inside the circle to see what the PA1 was like as a putter. Now, we have to admit, it is hard to give a fully accurate review of any putter’s performance when putting. We all have slightly different putting styles and techniques. Regardless, we still wanted to give our thoughts as best as possible. 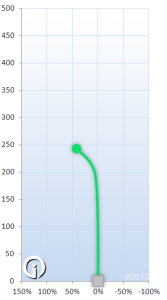 We noticed the PA1’s glide (or lack there of) the most here. The PA1 wasn’t wanting to really glide towards the basket. Using more of a pitch putt technique, we’d see the PA1 drop from the apex of our throw and fade left in to the basket. The high speed stability provided a very trustworthy flight as a putter. It released at a hyzer angle, the PA1 would hold that line the entire flight.

The flight chart from inbounds Disc Golf shows the very stable flight path of the PA1 with the predictable fade at the end of the flight. Overall we’d give the Prodigy PA1 flight ratings of 2, 2.5, 0, 2.

The PA1 is on the stable to overstable side of things for putters. It isn’t a big wind fighter, but will provide a very predictable flight path with a moderately strong fade. It performed well as an approach disc when given a slight hyzer flight and saw equal results when used as a driver.