You are at:Home»Reviews»Drivers»Prodigy Disc D4 Review 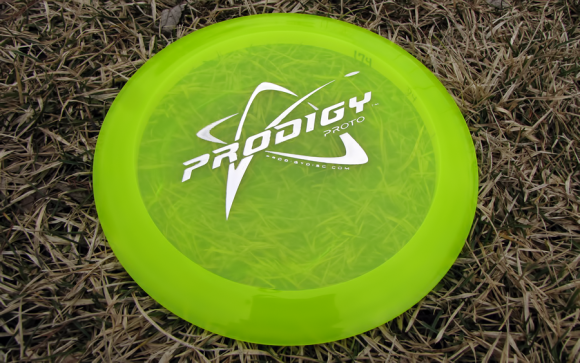 When Prodigy Disc released their D1 driver earlier this year, they also released the D1’s understable counterpart: the Prodigy Disc D4. While the D1 is more of an overstable thrower that isn’t afraid of a headwind, the D4 brings in a more understable flight path and should please disc golfers with a slightly weaker arm.

D4 is a very fast, under stable driver. It is designed for all players and flies extremely far. The D4 will turn up when thrown hard and will then react similarly to the D3 with its long glide and gentle turning finish.

We were able to give the D4 a nice test with a handful of disc golfers of multiple skill levels. While the stronger arms preferred the D1, the rest of the field were leaning towards the D4 as a disc that was easier to throw. If you have trouble getting other stable to overstable discs up to speed like the D1 or the Innova Destroyer, the D4 will be a more enjoyable disc for you.

The speed of the D4 is equal to the D1. In fact, they have the same rim width at 2.3cm. Prodigy’s Easy Release Technology does make it feel a little smaller in the hand. While it is an understable flyer at high speeds, you still need a strong rip to see the full “s-curve” flight path.

When released flat, the D4 will show some significant — yet controllable — turn. If you release it with a little bit of hyzer, you should see a nice hyzer flip into a long, straight flight. The turn reminded us of a slightly beat up Innova Katana.

The D4 does have some nice glide to help carry a little towards the end of the flight. The glide is first noticeable midway through the flight as it carries the turn and allows the fade to really work and bring it back to the left.

We wouldn’t recommend throwing the D4 into a headwind. If you are looking to throw something in Prodigy’s lineup when you are facing a headwind, we’d still recommend the D1. With a tailwind, the D4 will do the trick for you. It just needs some space to really work. 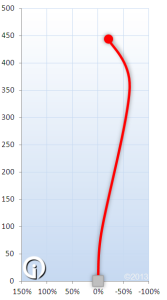 Using Innova’s flight ratings, we’d put the D4 at a 12, 5, -3, 2.5. Looking at the flight chart from inbounds Disc golf, you’ll see the big sweeping turn followed by a fade at the end of the flight. Weaker arms might consider the fade to be more of a 3 than a 2.5

Stronger arms will experience the turn shown in the flight chart from Inbounds. When released flat, the D4 will turn when up to speed and finish left as it slows. Stronger arms will also be able to use the D4 as a nice hyzer flip disc for extra distance.

If you aren’t able to get the high speed drivers out past 300-325 feet, you likely won’t see the big s-turn shots out of the D4. That doesn’t mean you should shy away from it though. With the added turn, the D4 could be a nice disc to grow into as your distance continues to get better.

While the Prodigy D2 and D3 aren’t on the market yet, the D4 is a nice compliment to the D1. Keep your eyes peeled for the rest of Prodigy’s distance driver line up soon.