You are at:Home»Reviews»Drivers»Prodigy Disc D1 Review 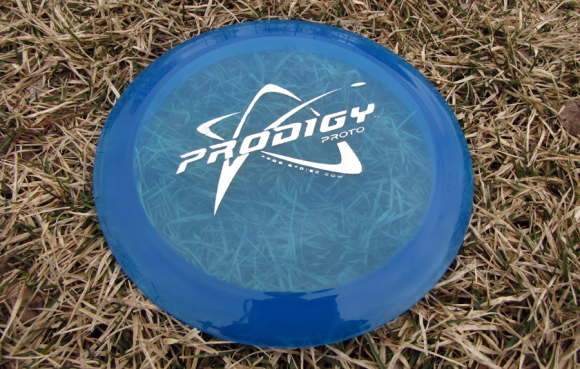 2013 brought us a brand new disc golf company: Prodigy Disc. In January, Prodigy Disc announced plans to release a full line of discs by the end of the year. First, they started with their distance drivers and initially released the high speed D1 and D4.

D1 is a very fast, over stable driver designed for power throwers. This driver is good for all conditions and flies as well into the wind as it does with the wind. The consistent flight path of this disc makes it a favorite of disc golfers looking not only for a long flight but pinpoint accuracy. The flight path is similar regardless of the weight.

We have only had a chance to throw the D1 in colder weather. With how gummy the plastic feels in very cold temperatures, we’re curious to see how it performs in the summer heat. For example, Opto plastic becomes very hard in cold temperatures. The 400 series plastic remained quite gummy this winter. Sitting in the middle of a fairway in 90 degree heat during the summer could make this plastic pretty flexible — almost too flexible. Only time will tell.

Another feature of the disc worth talking about is Prodigy’s “Easy Release Technology”. The Easy Release Technology brings a slightly beveled or rounded edge on the bottom of the disc. In our testing, we did notice a very clean release on our throws. It reminded us of the Vibram Lace, which also has a slightly rounded edge on it. If you don’t like the feeling of high speed drivers, this does make things feel a little smaller and a little more comfortable in the hand.

We were anxious to throw the D1. When Prodigy Disc was announced, many people wanted to get their hands on the new discs. We took them out to the field and our local course to give the D1 a workout.

A handful of local players were able to throw D1 so we could get a variety of results. We started out throwing the D1 with more of a tailwind or a slight crosswind. We all noticed that it wasn’t quite as overstable as we expected. There was some turn to the D1. Weaker armed players didn’t notice much turn, but stronger arms did see the slight turn at the start of the flight. It wasn’t “flippy” by any means, but certainly not a rock solid rating of 0 for the turn. We’d put it somewhere around a -0.5.

The D1 had a very consistant fade at the end of the flight. The D1 will still fly forward as it begins to power down. Yet, at the very end of the flight, it starts to really head left for us. After many test throws, the fade was became very predictable.

After seeing what the D1 could do with a tailwind, we turned around and gave it a test into a headwind. This is really where we confirmed the slight turn in the D1. Into a headwind, the D1 would turn a little more, but no more than a -1 for a turn rating. The D1 is not afraid of headwind at all. If you are facing a shot with a steady headwind and need some distance, the D1 will do the trick.

When it comes to distance, we were getting the D1 to fly very similar distances to our Innova Destroyers. We’d put the D1 in the Speed 12 category, although with the slightly beveled rim, it was a little easier to hold. The D1 was flying like a stable Destroyer with similar glide. 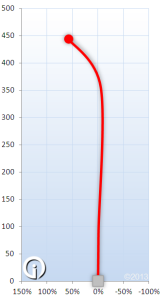 Take a look at the flight chart from inbounds Disc Golf for a very similar flight path to what we experienced. Notice the slight turn at the beginning followed by the slightly forward fade.

If you are needing a disc to battle a headwind, finish consistently to the left, and hold a reliable line — the D1 should do the trick. The plastic does feel nice, but we’re curious to see what it is like in the hot summer months.