You are at:Home»Reviews»Drivers»Plastic Addicts Intervention Review

When friends or family tell you “it’s time for an intervention” odds are it isn’t a good thing. In the disc golf world, an intervention has an entirely new meaning thanks to Plastic Addicts. Along with their Habit putter, the Central Illinois based company has released their first driver, the Plastic Addicts Intervention.

This high speed stable-to-overstable driver joins a group of discs that are quite common, but puts forth quite the impression when all is said and done. Plastic Addicts says this about their first driver:

Plastic Addicts sent us an Intervention for this review and we’ve put it through its paces to see how it matches up against similar discs.

First you’ll notice a comfortable grip with a flat top. We’ve seen discs like this with a very flat top also bring a very shallow feel to it as well. There is enough to the Intervention to provide a solid grip for throws that will obviously command some power. The width of the rim certainly puts it in the high speed range, but it isn’t the widest rim available. If you aren’t a big fan of wide rimmed drivers, the shallow dome of the Intervention helps with the overall size.

While we’re talking about dome, we were surprised to see the amount of glide we were able to get out of the Intervention. With less surface area under the disc it can be hard to get a lot of glide out of it, but the Intervention showed no signs of wanting to dump out too early or leaning on power too much over glide to carry out distance.

The Intervention is a high speed driver and due to the overstable nature of it, it does require some power in order to show its desired flight. There is plenty of high speed stability to go around and it will hold up to whatever you throw at it. We’d say there is a slight hint of turn, but it isn’t going to do anything too crazy for you. This only appeared on our strongest throws and even with the help of a little headwind. Otherwise, lean into it and give it all you can.

Slower arms will see an overstable flight right away, but results won’t be too frustrating. As with any high speed driver, if you can’t quite get it up to speed it either becomes more of a utility disc, or the disc just might not be for you.

If you do have the power, this could easily become a go-to distance driver. People are often looking for that disc they can give all they can and still trust the disc. You don’t want to see too much turn where you lose control or even lose confidence in it. The Intervention will show no signs of uncertainty. The fade is there and strong enough to allow you to rely on it, yet it still isn’t overpowering.

We’d put some strong throws behind the Intervention and the high speed stability will hold before allowing the fade to take over. Once it begins to slow down the fade will kick in a little later than expected as it continues to push forward. It isn’t long though before it gets to a point where it really kicks hard left to end the flight. The fade is strong, but not intimidating like some other drivers.

We also saw great results with the Intervention  when we kept it on a lower line and allowed the Intervention to skip at the end. Since it held a lot of energy until late in the flight we were able to really get some nice low movement on skip finishes. This came in useful on a few holes where a large flare finish can prove helpful.

As you would expect the Intervention can carry out nearly any hyzer line you put it on. The high speed stability will do its job before a strong fade closes things out. Anhyzers weren’t its favorite as we would see it break out relatively early in the flight and fight back to a flat line. There just is too much stability in the disc to do anything too dramatic in the anhyzer side of things. 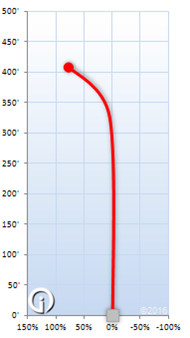 Overall, we’d rate the Plastic Addicts Intervention at 12, 4.5, -0.5, 4. Slower arms likely won’t see any turn at all, but there were many times when we saw just a hint of movement. The entire package is a high speed driver that can easily handle power along with just enough glide to help get you some distance.

The flight chart from inbounds Disc Golf shows a flight similar to what we were seeing. Plenty of stability before a nice strong finish. Quite frankly, a flight that is tough to dislike.

Every disc golf bag needs that disc that you can rely on when facing a tough shot. The Plastic Addicts Intervention can provide you with an option that will stand up to virtually any power you put behind it along with the confidence it will fade out at the end of the flight. Lay it out over a tough line or take it right down the fairway. No matter the use, this is one intervention worth participating in.