You are at:Home»Reviews»Putters»Plastic Addicts Habit Review

It is said you only get one chance at a first impression. In disc golf, that first impression can be quite the task when it comes to introducing a new disc that could ultimately knock out a favorite or two in your bag.

Plastic Addicts started as a small disc golf shop based in North Pekin, Illinois (near Peoria) has grown into what they claim to be the largest disc golf retailer in Illinois. The next obvious step was to introduce their own line of discs and they now have two on the market, the Habit putter and Intervention driver. Both discs can easily turn some heads and show that the new companies that pop up on the market can produce some high quality discs.

We’ve known owner Johnnie Harrison for a few years now and were anxious to check these out after Harrison sent us the discs to review. Here is how Harrison describes the Habbit:

Disc golfers have an addiction to plastic, or maybe you could say it’s a “Habit”. Whatever it is, fill your cravings with the newest release from Plastic Addicts the “Habit”. The “Habit” is a stable putter with the glide and range of a mid-range that will always give you the straight flight you’re looking for. If you’re looking for a dependable straight flying putter, look no further than the “Habit” from Plastic Addicts.

The Plastic Addicts Habit has a wider diameter than most putters and almost feels like hybrid between a putter and midrange. It has the wing shape of a putter, but the size makes it feel more like a midrange and the overall flight comfortably fits in a gap between putters and a typical midrange.

When you grab a hold of the Habit, you’ll feel a very rounded nose with a very slight convex shape on the bottom wing. Combined it gives a very full feel that fills out your hand. It isn’t as deep as a Latitude 64 Dagger, for example, which makes it a little more manageable for smaller hands. Regardless of your hand size though, you should feel right at home with the Habit.

We started with the Habit on the teebox and moved our way closer to the basket. With the number of discs we’ve reviewed over the past few years, we tend to see just about every combination out there and often find many similarities between discs. That isn’t necessarily the case with the Habit. After our first few throws with the Habit, we were very surprised with what we were seeing.

The first thing that stood out with the Habit was the shape of the flight. You will see a little turn on your throws and it is a turn you can really control. On a flat release the Habit will track slightly to the right on a very smooth turn. It won’t bank too hard at all, but it will move right of center. Then, drop the wing a little bit and give it a little hyzer on release and it will slowly flip to flat and just hold a straight line.

As the Habit continued down the fairway we were waiting for the fade to kick in, but it just never came. Time and time again the Habit would continue to fly on it’s initial line and slowly fall to the ground while continuing to push forward. Once we got a feel for the lack of fade we focused more on the start of the flight to help shape our shots with the Habit. There just isn’t fade with the Habit. Zero. Nada. Throw it right to where you want it and trust the Habit.

One of the main reasons the Habit can carry out the flight that it does is the glide. For a putter it certainly has more glide than most and when combined with the slight turn and nonexistent fade, the Habit can hit some unexpected distances. Throw it hard and let the Habit do the work. You’ll be pleased with the results.

Hyzer throws weren’t the Habit’s strength due to the lack of fade it never had anything to really finish on. We found shorter approach shots thrown on a hyzer line to be a little better than drives, but you’ll likely want something with a little fade to help it over.

Now on the other hand, anhyzer shots with the Habit are handled with ease. It will hold whatever line you start it out on, and with a little natural turn, it doesn’t need a lot of help to get started. We were able to give it a little added height and turn on it ever so slightly before letting the glide and natural flight take over. On these anhyzers the Habit would never break out of the angle and continue to fly on that left to right line until it settles down to the ground.

Approach shots were just as useful with the Habit due to the very neutral flight. Even on lower speeds you’ll still get a hint of turn and a finish with virtually no fade. Let the Habit do the work and you’ll be finding yourself closer and closer to the basket.

Don’t expect a very overstable flight that will fight winds with the Habit. When thrown into a headwind the Habit wasn’t the ideal choice, but there are other options out there for fighting wind on shorter drives. If you’re looking for that added control

When it comes to putting, the Habit is another one of those putters where you can just go straight at the heart of the basket. Trust the disc and jam it in there. You don’t need to account for any fade and the glide can help on some longer putts as well. The larger diameter might require a little adjustment if you are used to more traditional sized putters. 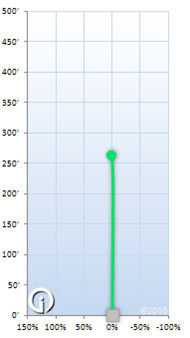 Overall, we’d rate the Plastic Addicts Habit at 3, 5, -1, 0. You’ll get a flight that is closer to a midrange than a putter that produces one of the straightest flights out there. Plenty of control with surprising results.

The flight chart from inbounds Disc Golf shows a flight very close to what we were seeing. A little turn will adjust the overall angle of the flight before showing nearly zero fade. Straight for days.

For the first step into disc golf manufacturing for Plastic Addicts, the Habit putter is a very strong effort. It isn’t just another traditional putter that you can find on the shelves already. This brings control, a very straight flight, and results that can put a smile on your face. This Habit might be one you don’t want to break.