A new disc golf game is being released today for iOS. Pixel Disc Golf brings a great 16-bit-esque design and a casual approach disc golf. Indie developer Jari Räisänen reached out to us last week and gave us an early preview of his work.

The game play is very simple, but don’t confused simple for easy. The entire game, which can be played with up to four players, is controlled with one button. Your disc golfer will stand and raise his arm up and down while waiting for you to select the angle of the throw. To choose the angle, you press and hold the “Throw” button. A power meter will appear and once you release the “Throw” button, the disc will fly. The only other control you have is the ability to flip the disc golfer around to throw in the opposite direction. Pixel Disc Golf currently has three courses with six levels. More courses are being developed with new challenges. 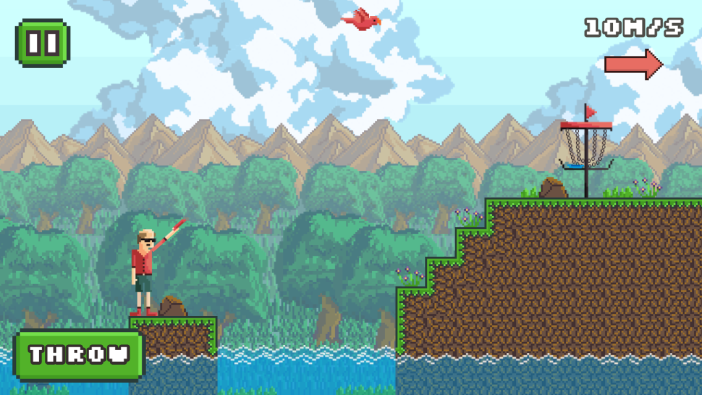 When we first picked up the game we were expecting a somewhat easy experience just based on the looks of the game. Räisänen did a great job at designing the courses to offer just enough difficulty to make it challenging and fun. You’ll quickly get the hang for the straight forward shots without any obstacles in the way. Once you have to play around trees, water, and overhangs, you’ll find yourself doing a lot more planning so you don’t find yourself stuck and quickly racking up the strokes.

Pay attention to the wind direction and strength too. Tailwinds will knock the disc down earlier, while headwinds will slow the disc down, especially on higher shots. It certainly adds some difficulty without making it too frustrating. Oh, watch out for the birds!

For a quick distraction from your day, or just a simple time waster, Pixel Disc Golf is a great choice. The disc golf element is something we’re all familiar with and actually captures it quite well. We hit the top band of the basket a few times on some short shots just like we’ve been known to do on the course—and yes, it brought the same level of frustration.

Pixel Disc Golf is available on the iOS App Store for $1.99.