You are at:Home»Tournaments»PDGA National Tour heads to Hall of Fame Classic

Just one week after Paul McBeth took home win at the 28th Annual “Steady” Ed Memorial Masters Cup, the PDGA National Tour rolls into Appling, Georgia for the Disc Golf Hall of Fame Classic. Held at the PDGA International Disc Golf Center (pictured above), disc golfers will be tested in every part of their game during the fourth stop on the National Tour. We talked to Tournament Director Jason Allind for a preview of this weekend’s tournament. 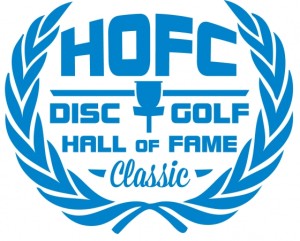 All Things Disc Golf: While the Hall of Fame Classic has been an A-Tier event previously, this year the HOFC is a part of the PDGA National Tour. Was it important to you and the staff to make this event part of the National Tour series?

Jason Allind: This year marks the return of a National Tour event to the International Disc Golf Center, this was very important to us as we have not held a tour event since the grand opening in 2007. We have done a few majors and a number of A Tier’s but the IDGC has been off the NT schedule for a number of years. The Hall of Fame Classic is an event with lots of history and was an NT for a number of years in the early 2000’s and was started by the PDGA’s Executive Director Brian Graham.

All Things Disc Golf: For those unfamiliar with the IDGC, what can players expect from the courses for this tournament?

Jason Allind: The IDGC is the ultimate tournament facility, with 3 championship level courses, beautiful club house, and the help of the full PDGA staff makes the events at the IDGC one of the best in the country. We specialize in seamlessly run events, lots of amenities, and quick turnaround of scores and ratings. Our spring and fall events are usually scheduled around the PDGA Board of Director summit meetings. This gives players the opportunity to make connections with PDGA board members and possibly sit in some of the meetings.

The IDGC courses are always evolving, thanks to the great support I get from the community, the PDGA, and Columbia County. We have worked really hard this winter and spring to get the facility ready for the HOFC. We have reinforced a countless number of tee pads, painted tee signs, opened up teeing areas and greens, and put a fresh layer of sod on the putting green behind the clubhouse.

All Things Disc Golf: On the pro side, while there are certainly many of the top ranked disc golfers participating, others had to opt out of playing in the HOFC due to the tight turn around from last week’s Masters Cup and next week’s Copenhagen Open in Europe. Are there plans to work with the schedule in future years to try and attract more of the top names?

Jason Allind: Unfortunately the scheduling was out of my hands this year, the PDGA always tries to accommodate other communities and events before our own at the IDGC. We had originally chosen a different weekend for the Hall of Fame Classic, but we were asked to move to help another large tournament. We were also inhibited by a fiscal year for one of our major sponsors and had to do the HOFC in the spring. This year we will add over $10,000 to the pro NT side of the tournament thanks to this sponsor.

All Things Disc Golf: How important is it to also run the amateur side of the tournament and allow them to play on such great courses and with other top names in attendance?

Jason Allind: I think it is very important to provide events for all levels of competitors, at the IDGC we focus on all levels and types of disc golf tournaments. Any given year we run multiple charity, amateur, collegiate, women, team, and professional events. With the size of the IDGC it is very important for us to incorporate amateur A tier event with the National Tour. My personal goal is to fill every hole at the IDGC for a tournament, to my knowledge this has not been done yet. Right now we are sitting at 187 registered players, my cap with foursomes on every hole of the IDGC is 216.

All Things Disc Golf: What is the players pack like for the HOFC? Other events besides disc golf planned for the weekend?

Jason Allind: Player’s packs are shaping up nicely for this years’ event, we paired with Dynamic Discs our shirt sponsor to offer a nice dri fit polo. We also will be providing a really nice IDGC logo towel, HOFC bag pin, tournament stamped mini, Prodigy disc or pro shop voucher and IDGC tote bag. We are also having a free southern style Barbecue dinner on Saturday night at the Roddick Pavilion with live entertainment. The Hall of Fame will be doing a silent auction all weekend long, all proceeds go directly to the Hall of Fame and promoting the legacy of players and promoters who made a difference in the sport.

All Things Disc Golf: Prodigy Disc came on recently as the title sponsor of this year’s event. What have they brought to the table?

Jason Allind: Prodigy has become a great partnership with the Hall of Fame Classic, we are proud of this as they are based in our home state of Georgia. We are still working on the specifics but they are coming up with some great things to help the event and we are very happy to have them on board.

All Things Disc Golf: Who else makes it possible to put on such a big disc golf tournament?

Jason Allind: We would like to thank Dynamic Discs for the wonderful shirts, Innova Champion for the great CFR discs, all the players that sponsored the players guide and tee signs. Columbia County also came up big this year, between them and Prodigy Disc we were able to add over $10,000 cash to the payout. We will be happy to welcome our favorite disc golf volunteers Old Man and Mom Wallis from Peoria, they come down every year for at least one of our events and are becoming a fixture at the IDGC. The Augusta Disc Golf Association will be cooking lunch for the player’s to help raise money for our club A-Tier in the fall the Augusta Classic. I also want to thank my work crew from the last 2 weeks that has helped get the IDGC tournament ready: Mike Trello, JP Jones, and Daniel Swenson.

Even though the tournament won’t have all the top names on the PDGA tour, the amount of talent in Appling this weekend would be tough to beat. The Hall of Fame Classic should be another very exciting event on the National Tour. As with other National Tour stops (and other big tournaments), be sure to follow @PDGALive on Twitter for updates all weekend long. During the Masters Cup we found ourselves glued to our phones waiting for the updates.

Good luck to all those in action at the HOFC!