You are at:Home»Tournaments»Paul McBeth, Sarah Hokom lead 2015 European Open after Round One

The first round of European Open is over! Contrary to the weather forecast that promised occasional rain showers and even a slight risk of thunder, the weather at the Beast was nice and sunny all day with temperatures around 15-19°C (59-66°F). The wind that is often a factor at Nokia was also relative calm which made the scoring conditions perfect for the opening round of the tournament.

Sarah Hokom jumps to the lead in FPO 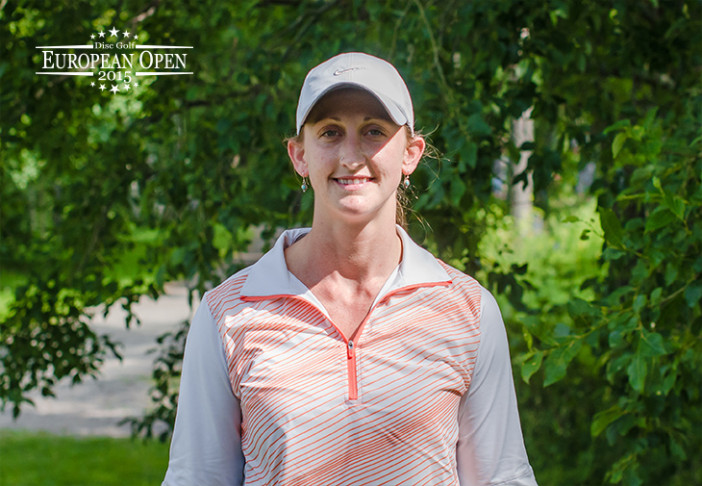 First time EO attendee Sarah Hokom was able to make use of the calm conditions at the Beast to keep her scorecard low on bogeys. Hokom also lead the FPO field in amount of birdies with deuces on holes 4 & 14 and a very impressive 3 on the extremely tricky 182m Par 4 hole 13. Hokom returned her scorecard with a 66 (+2) to take the top spot going into round 2. Behind Sarah the 2-time European Open champion Valarie Jenkins shot a 67 and will attacking the Beast just one stroke behind Hokom. The reigning world champion Catrina Allen (68 / +4) and the defending European Open champion Paige Pierce (71 / +2) will complete the ladies lead card for Friday. The top European player in FPO today was Swedish Camilla Jernberg with her 74 (+10).

As expected, the defending European Open champion and 3-time world champion Paul McBeth (USA) has his game plan for the Beast lined up very well. On hole 9 his line was actually so perfect that it resulted in an awesome skip-in with crowd cheering and cameras rolling as the disc hit the basket. Unfortunately hole 9 is a very tricky one to film, but you can get the idea from the video below and from the live update clip on the European Open Instagram account.

After the ace Paul went on to birdie 4 more holes which gave him the total score of 54 (-12) for the day. This is also the official course record for the Beast, as the layout has seen some new changes since the 2013 event. Will Schusterick (USA) was also packing the heat today and was able to tackle the Beast with an impressive bogey-free 56 (-10). The MPO top card for round 2 will be completed by Ricky Wysocki with his 58 (-8) and Finnish Miko Fyhr with the same score as Ricky. The chase card for round 2 will also feature local Finnish talent, as Teemu Nissinen and Arttu Sikanen returned from their rounds with a pair of 57’s (-7). USA’s Nathan Sexton (57/-7) and Devan Owens (58/-6) will complete the MPO chase card for Friday.

Insider Show – European Open Round One

For today’s episode our host Jamie Thomas will be joined by co-host Nate Doss and the special guest of the program is the 2008 disc golf world champion Dave Feldberg. Insider analysis will be brought to the table by PDGA’s International Director Brian Graham.

Editors notes: Published in partnership with the European Open staff.