We’re not quite back in the full swing of the disc golf season, but this weekend there were two big A-Tier events – the 20th Annual Texas State Disc Golf Championship and the Daniel Boe Memorial tournament. The game’s best professional players were out competing and there were some tight races both in Texas and California. Come Sunday, Paul McBeth and Paige Pierce took wins in Texas while Ricky Wysocki battled Philo Brathwaite for a win California.

The days of Paul McBeth winning big events by huge margins may be over, but that doesn’t mean he’s any easier to beat. Just ask Simon Lizotte. We saw Simon Lizotte poised for victory at the Aussie Open and the Memorial Championship this year, but he just hasn’t been able to overtake McBeast. There was a lot of action throughout the weekend, just check out Jordan Sellers’ highlight video, but in the end it was McBeth taking another 2015 victory.

When McBeth and Lizotte came out of the gates swinging on Saturday in Texas, it seemed clear that we would be seeing another close match between these two. McBeth shot a 1068-rated 55 only to be bested by Lizotte’s hot round of 54. Gregg Barsby and Matt Bell found themselves in the mix as well as the only other two competitors to shoot under 60 for Round 1, but it’s always a steep climb when you give up 3 or 4 strokes to McBeth and Lizotte.

In Round 2, the field came out pretty even. Guys like John E McCray, Nate Sexton, and Paul Ulibarri were all able to shoot in the low 50s on the South course. With McBeth shooting a 53 and Lizotte shooting a 54, no one was really able to pick up any ground on the two leaders. After the first two rounds on Saturday, it was all going to come down to Sunday when McBeth and Lizotte went into the final round tied for the lead.

Paul McBeth is likely the last disc golfer anyone would want to head into a final round tied with. We’ve seen him come up big in clutch situations time and time again, but if Jeremy Koling has taught us anything, it’s that he’s not totally invincible. Simon Lizotte was going to have to channel his inner Koling if he wanted to come out ahead of his friend in Texas and outperform 2014’s second place finish.

As is so often the case, McBeth was able to outshine the competition on Sunday. His 1051-rated 56 was good enough for the hot round on the North course and brought him to a four stroke victory over Lizotte. If the start of this season has been any indication, it seems like we can expect to see a lot of close races between the German and the 3-time defending world champion throughout the rest of this year.

Rounding out the top 5 for the 20th Annual Texas State Championships were Gregg Barsby, Nate Sexton, and John E McCray.

Paige Pierce has been flat out unstoppable in 2015. We’re used to seeing her battle it out with Catrina Allen week in and week out, but Pierce has just been dominant in every event she’s played so far this year.

In Texas this past weekend, Pierce faced her toughest battle of 2015 as Catrina Allen gave her everything she could. After falling behind by 3 strokes in Round 1, Pierce was able to come back and tie for the lead heading into the final round. Just like the Men’s Pro Open battle, it would come down to a final round fight.

After 18 holes, Pierce was able to squeak by Catrina Allen. With a 987-rated 64, Pierce took a two stroke victory over Allen for her 5th straight win in 2015. We’ll see if she can keep things up as we continue through the early part of the year, but she is dominating right now.

Ricky Wysocki and Philo Brathwaite run away from the competition, but Wysocki comes out on top 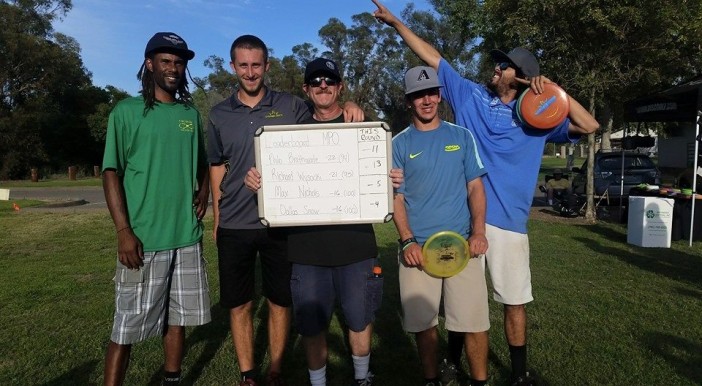 Right from the start of the Daniel Boe Memorial tournament in California, it was clear that the competition was going to be a two horse race between Philo Brathwaite and Ricky Wysocki. After Round 1, Philo Brathwaite found himself out to a huge lead. His 1075-rated 44 put him 5 strokes ahead of Wysocki, the only other disc golfer to shoot in the 40s. There were a lot of uncharacteristic rounds to start this tournament off, but Philo clearly had victory on his mind.

Philo cooled off a bit in the second round while Wysocki was just getting started. Brathwaite came in with a 1019-rated 50 for his second round. Not many people would scoff at a 1019-rated round, but when you’re trying to outpace Ricky Wysocki it may take a little more. Wysocki shot a 46 for the second round, putting him just one stroke behind Brathwaite heading into the final round.

The final round was a close battle, but in the end it was Wysocki who found his way into first place. He shot a 45, which was good enough to regain two strokes from Brathwaite and give him a one stroke victory for the tournament. Rounding out the top 5, a good way behind the top two, were Nikko Locastro, Shasta Criss, and Peter McBride.

It’s still not time for a true weekly A-Tier recap, but we’re getting closer. We’ll start seeing A-Tiers pick up on a weekly basis starting in mid-April, but for now we’ll have to deal with the sporadic tournament weekends. At the end of April, we get to watch another national tour event as the massive Glass Blown Open in Emporia, Kansas will take place from April 30th to May 2nd. Stay tuned for more disc golf action!