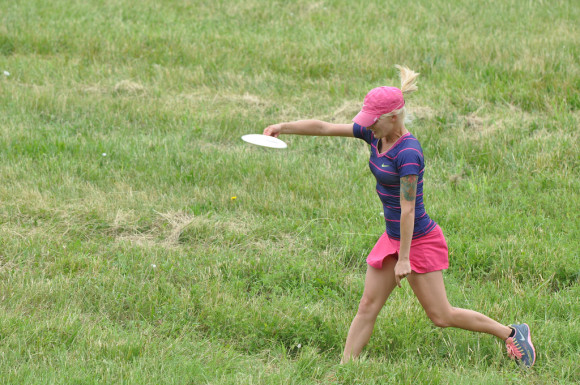 The sixth stop on the PDGA National Tour provided another exciting weekend of disc golf action. The 2013 Kansas City Wide Open showcased the world’s top disc golfers on four of the best courses in the area. When all was said and done, Paul McBeth and Catrina Ulibarri took home victories.

Day one of the KCWO took the pros to Waterworks Park and Rosedale Park. Round one saw Garrett Gurthie and Matt Orum jump out of the gates early shooting a blistering rounds of a 45. This placed the pair one shot ahead of Nate Doss and Steve Brinster who were tied for third.

The action shifted to Rosedale for the afternoon round where Nikko Locastro and Cale Leiviska took the hot round and secured a spot on the top card for round three and the start of the weekend. Will Schusterick and Brinster rounded out the top four after day one.

On the women’s side, it was Paige Pierce jumping out to an early lead while shooting a two-under 54. This put Paige two shots ahead of Catrina Ulibarri after round one. Paige remained on top of the leaderboard after round two with Ulibarri, Val Jenkins, and Sarah Cunningham close behind.

Saturday greeted disc golfers with hot and humid conditions at Blue Valley Park for round three. Round three is where McBeth began his climb to the top of the leaderboard. McBeth and Locastro were both on fire as they shot 54 to tie the course record. The next closest round came from Paul Ulibarri who shot a 57. This setup a tight race into the final day, but McBeth still had work to do.

Sunday’s final round took place at Swope Park. McBeth found himself in a familiar place: trailing entering the final round. McBeth wasted little time and took the lead from Locastro and never looked back. McBeth shot a 50, with Locastro falling behind with a 56. Doss remained close with a 52 and Paul Ulibarri rounded out the top four heading into the final nine.

In the final nine, McBeth continued to pull away with six straight birdies to start the finals. Doss posted the same -7 in the finals as McBeth and finished second. Overall, McBeth shot -47 to win by five. Locastro finished third and Paul Ulibarri in fourth.

The women’s final round was equally as exciting. Paige Pierce led Catrina Ulibarri by seven heading into the fourth round. Catrina shot the hot round to cut Pierce’s lead to just three heading into the final nine. After Pierce gained another shot on Catrina on the first hole of the final nine, but gave up the entire lead on hole two.

Pierce missed hole two’s island green with her drive forcing her to go to the drop zone. She missed her shot from the drop zone and was forced to try again. After reaching the green and making her putt, she took a triple bogey while Catrina took a birdie to tie things up. The duo matched scores on every hole the rest of the way to force a playoff for the KCWO title.

On the first playoff hole, Catrina barely escaped trouble with her drive and landed in the fairway. Pierce on the other hand landed out of bounds. This all but locked up the title for Catrina. Pierce gave her long birdie chance a run at the basket, but fell short. Catrina took her birdie and the victory in the playoff.

This leaves us with just two stops left on the PDGA National Tour: Beaver State Fling and the Vibram Open. We should note, men’s favorite Ricky Wysocki was forced to pull out of the KCWO with a calf injury. The battle for Player of the  Year is wide open on both the men’s and women’s side.