You are at:Home»Interviews»Operation Disc Golf looks to bring disc golf to the troops 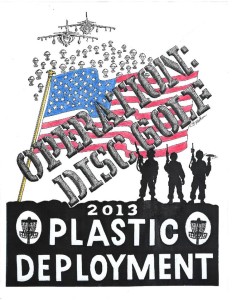 Over the last few weeks on Facebook we’ve seen more and more chatter about Operation Disc Golf. We noticed photos from PDGA touring pros showcasing boxes of discs and other disc golf merchandise being sent to the Operation Disc Golf crew. While it was clear they were sending the materials to active military, we were curious to find out more information.

We reached out to the group and got a hold of Don Smith to get the full background on this effort.

All Things Disc Golf: We should start at the beginning. How did Operation Disc Golf get started and why?

Don Smith: “Operation Disc Golf” started after Christmas last year when I received a secret santa gift from Henry Crankshaw, a native of Alaska who is active military and periodically deployed overseas. We began chatting about disc golf and how his looming deployment would bring an end to disc golf for him for awhile because where he was being deployed would have no disc golf. One conversation led to another and I promised to do what I could to bring disc golf to Henry and his fellow deployed military servicemen and servicewomen.

This project has been a simple but impactful way for us to connect with and give back to our military. We envision this stress relieving recreational activity bringing a little fun and offering a chance to get their minds off the tough situations they likely face on a daily basis . We also want to show our gratitude for their service that allows us to travel all over the country safely playing the sport we love.

All Things Disc Golf: Where are the discs being sent and what is being done with the donations?

Don Smith: The discs are being shipped to our contact in an undisclosed military location in southeastern Asia. Along with discs there have been other items like baskets, bags, minis, tshirts, stickers and other swag donated and shipped overseas. The donations are being used to introduce military personnel on the base to disc golf and run a small tournament. Another base is already being involved and there is more to come. Cash donations are used to help with shipping costs, basket purchases and future projects within this group.

All Things Disc Golf: How can someone get involved and send some discs along?

Don Smith: Check out the “Operation Disc Golf” group page on Facebook. Join the group, post a pic and we’ll send you the address or email donsmith123123@gmail.com regarding your interest.

All Things Disc Golf: Are you looking for anything specific? New, used, light, heavy, etc…?

Don Smith: We are looking for all disc golf related items. People have donated used discs, new discs, minis, baskets, stickers, and other swag. Anything that you might use to disc golf is a great contribution.

All Things Disc Golf: Should people continue to drive traffic to your Facebook page? If someone doesn’t have Facebook, how can they get in touch with you?

Don Smith: We primarily use the Facebook group to communicate, but anyone not on Facebook can contact me at donsmith123123@gmail.com for more information. We hope to continue to bring disc golf to other military bases for years to come and will expand to a more traditional website as necessary.

All Things Disc Golf: Is there anything you want to cover?

Don Smith: Finally, we want to thank everyone who has been involved in this project already and urge everyone else to check it out. Henry Crankshaw has been our main administrator and contact in the military, as well as one of the inspirations for this project, so a huge thanks to him and his team.

In addition, we have already had several companies step up with some amazing contributions: Arroyo Disc Sports, Gateways Disc Sports, Paragon Disc Golf and Legacy Discs.

We also want to thank a few people/groups who delieved in this project from its inception and really helped us jump start it: David Burley, Garrett Grizack and the CA crew, Mike Beattie and the OR crew, Jason Rubito, Will Kelley, Be Rad and the MT crew, Job Wilson, Peggy Hokom, Mike Mellock, Johnnie Harrison and so many others and more to come.

And last but not least, a special thanks to all the touring pros who contributed: Holly Finley, Shasta Criss, Rebecca Duffy, Sarah Hokom, Colleen Thompson, Jayne Snider, Dana Vicich, Jeremy Koling, Eric McCabe, Jeremy Mount, Will Schusterick, Philo Brathwaite and many more that we missed!!

As Smith stated above, if you are interested in participating with Operation Disc Golf, shoot an email to donsmith123123@gmail.com or join the Facebook group to get started. We are getting a box of discs together ourselves and will be sending that along soon!